Five members of the Joudah family were killed by an Israeli airstrike in Gaza on Sunday. Yedioth Ahronoth, one of Israel’s most widely-read papers, dedicated not a single word to the incident.

Monday’s issue of Yedioth Ahronoth, the “newspaper of the country,” includes not a single mention of the fact that the IDF killed a mother, her four children and another two-year old girl on Sunday. Nothing. Doesn’t exist. Didn’t happen.

This morning, Yedioth readers were greeted with plenty of information about what happened in southern Israel. The front page discusses the tragic death of four-year-old Daniel Tragerman, as well as the beginning of the new school year. The opening spread goes into detail about Tragerman’s funeral, followed by three pages dedicated to the school year (which is also discussed in the daily supplement), two pages on the hundreds of families who are leaving the towns surrounding Gaza, one page on the Palestinian Authority, a spread on Israeli soldiers and one more page on stone-throwing in the West Bank. 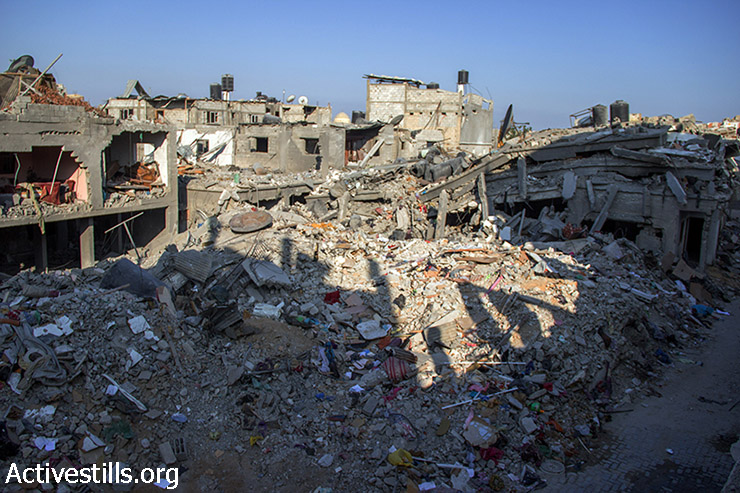 A view of a neighborhood after an Israeli airstrike in the Gaza city of Beit Hanoun. (Basel Yazouri/Activestills.org)

The page dedicated to the Palestinian Authority includes a short blurb on the assassination of Hamas Financial Officer, Mohammed Al-Ghoul. Inside the text there is a mention of the fact that “several people were killed” in an attack on a commercial center. “Several people.” That’s it. Just like that. Page 10 at the bottom. And without a single word on the killing of five members of the Joudah family: mother Tasneem Issam and her children, Muhammad, Rawia, Rajd and Osama, along with another two-year-old girl. Nothing.

Twelve pages dedicated to news on the fighting, without any room for mentioning a family that was killed.

Every person in this country ought to be worried by this kind of reporting, especially from such a prominent newspaper. This isn’t even a question of concern and empathy. It’s a question of knowledge. Does the Israeli citizen have the necessary knowledge in order to understand the fighting? To understand what is happening or what each side sees in the other? To understand the motivation behind the fighting and what will help end it? Yedioth Ahronoth’s readers are justifiably flooded with information on the distress of the residents of the south, but they don’t know a thing about what happens in Gaza.