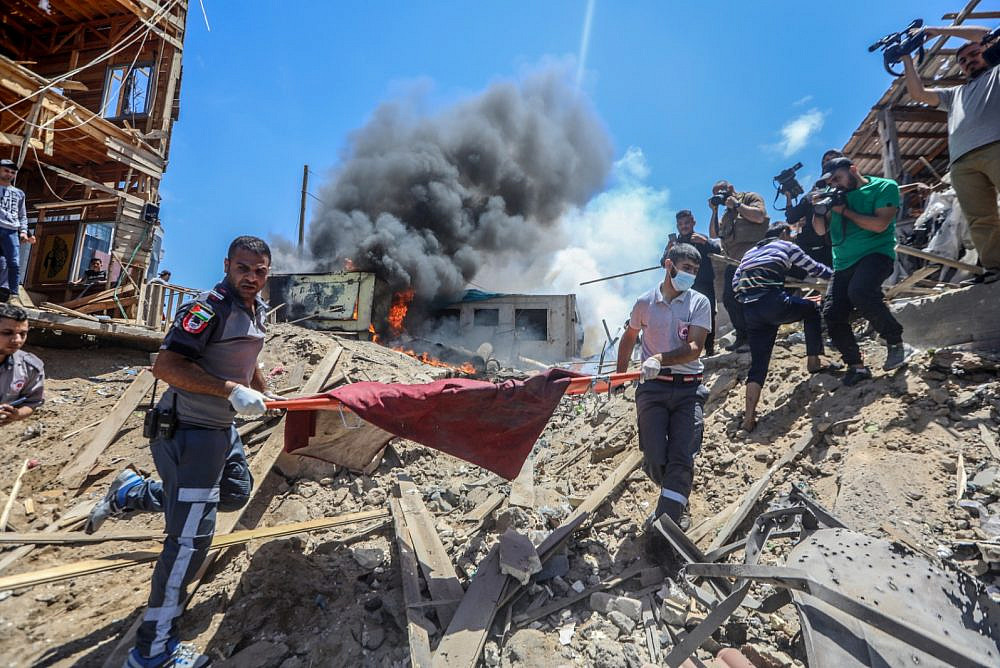 Palestinians carry the wounded following a deadly Israeli airstrike on a cafe on the beach in Gaza City, May 17, 2021. (Mohammed Zaanoun/Activestills)

For the last 14 years, I have been running a hospital in the city of Beit Hanoun in northern Gaza. The first day of the war was the hardest day of my life as a doctor.

I’m talking about the first shelling by Israel on Gaza. It was a week ago, just a little after seven in the evening. The first ones killed.

Two children arrived in an ambulance, one of them was three years old, one was seven. They are brothers, and as soon as I saw them, it was clear to me that they were both dead. Their bodies crushed and burned.

Their father also arrived. He was seriously wounded but still conscious. He got upset and asked me, “What about them, what about my kids?” Then another ambulance arrived with a little girl, 10 years old. She too died. This is the older sister of the first two children. All from the al-Masri family.

More and more family members arrived. Three brothers from the same family had been mortally wounded, so I put them in intensive care. The mother was in the waiting room, barely able to stand, with some of her other daughters, unharmed. Then another ambulance arrives. This was their cousin who was supposed to get married on the second day of the Eid holiday, and had already bought a suit and rented a hall. He was a young man. His wife arrived at the hospital, but within minutes he too died.

The mother buried her children just an hour after they arrived at the hospital. And as we removed the bodies, more and more wounded arrived. People screamed. It was a crazy atmosphere, as if the end of days was upon us. When you see things like that, your heart turns over.

We have between three and four doctors on duty. The conditions in Gaza are illogical. I always say that even if you bring the best doctors from around the world, they will not be able to get by here. Only doctors in Gaza learn to work in such conditions. Palestinians put out a fire following a deadly Israeli airstrike on a cafe on the beach in Gaza City, May 17, 2021. (Mohammed Zaanoun/Activestills)

My hospital has no economic capacity to deal with the attacks. Our healthcare system has collapsed because of the siege that has cut us off from the rest of the country. A small hospital like mine — where nine dead and 60 wounded people arrive, seven of them in very serious condition — does not have the necessary medical equipment or medicine to properly treat them. We are forced to improvise all the time, and as the pressure reaches its peak, suddenly a boom, another shelling. Another person killed, 10 wounded. It does not make sense.

It’s endless. There are dozens of wounded children and women. Throughout this war, many civilians — not armed resistance fighters or military personnel — came to our hospital. We saw entire families, like the al-Masri family, simply being wiped off the face of the earth. I do not know what the Israeli army is aiming for, but here, in this hospital, I see the results: civilians are dying inside their homes.

Even as I write this there is shelling going on in the background. At any moment, dozens of wounded people can arrive in the hospital. My voice is hoarse from the exhaustion and dealing with the injuries. At first I fasted because of Ramadan. Once, at the beginning of the war, I looked at my watch and realized that the fast had ended an hour before, and that I am finally allowed to drink water. I spent an hour running from place to place without even noticing that the fast was over.

I only sleep in between the shelling. They come in waves, and sometimes there is only a half hour for sleeping. Yesterday I worked all day, then all night, until the morning came. At sunrise I prayed at the hospital and went home at 5:30 a.m. Two hours later, I was already back in the hospital.

Now I am eating with the kids at home. We have an hour together before I change clothes, take a shower, and go back to the hospital. I’m under a lot of stress. This situation affects my family and children; I barely have time to spend with them. But thank God, when a person finishes the work, he feels it is a great achievement. That’s enough for me.

The main message I want to convey now is to stop the bombing and harm to civilians. At the same time, the Israeli government must be pressured to end the blockade on Gaza, which is one of the central reasons for most of what is happening here. The Erez crossing is closed. The crossing with Egypt is closed. It is a prison in every sense of the word. Over two million people live here on an isolated island. We have no ability to go out to work. We have no port or airport; obviously everything will explode. We are human beings, we deserve to live.

A version of this article was first published on “Words Beyond,” an independent media website covering Gaza. It was also published on Local Call. Read it here.

Jamil Suleiman runs a hospital in the city of Beit Hanoun in northern Gaza.