Not only must Gaza’s journalists worry about Israeli snipers at the fence — they are also forced to work without sufficient protective gear, access to psychological support, or free speech protections. 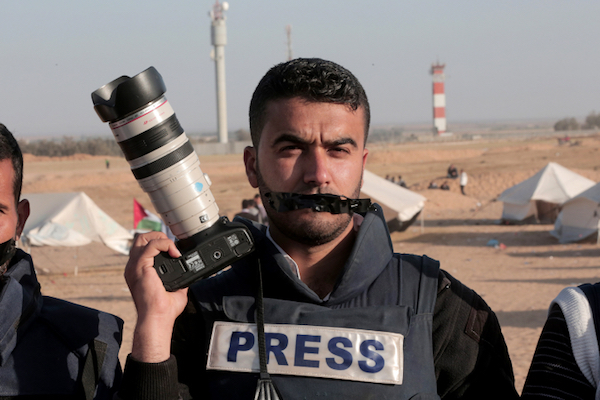 Palestinians protest against the killing of journalist Yaser Murtaja near the fence with Israel, in the southern Gaza Strip, on April 8, 2018. (Abed Rahim Khatib/Flash90)

GAZA CITY — The deaths of Yaser Murtaja and Ahmed Abu Hussein, who were shot by Israeli snipers while covering the Great Return March protests on the Gaza–Israel fence, uncovered Israel’s brutal crackdown on the nonviolent movement.

But their deaths also highlighted the dangerous conditions that journalists in Gaza work in, often risking their personal safety to document the lives of Palestinians in the strip.

Without sufficient protection gear, access to psychological support, stable streams of payment, and free speech protections, journalists in Gaza are struggling to build their careers.

Hosam Salem gave up his studies in computer engineering to follow his childhood dream of becoming a photographer. After self-funding an exhibition, and promoting his photos on social media, he succeeded in landing freelance gigs with news agencies.

According to Salem, lack of personal security is the most common problem that freelance journalists encounter. For example, the Israeli government prevents the entry of helmets and protection vests, under the pretext that Hamas uses them for terrorist purposes. The protective equipment that is available within the strip is often too expensive for journalists to buy independently.

Some have found it more affordable to simply sew their own press vests. Others, like Salem, can only do their jobs if and when colleagues are willing to share their gear: “Whenever I come closer to the borders, I borrow the vest and helmet from my colleagues to take good and clear pictures. I do not have another choice, taking pictures is my only income.”

Another problem that journalists in Gaza face is timely payment. Because of the high rate of unemployment, journalists work with news agencies based outside the enclave. But it’s not easy; Salem, for example, said he is still owed $1,200 from a European news agency for his work covering the 2014 war on Gaza. After Hamas took over the Gaza Strip in 2006, the Israeli government imposed even harsher restrictions on the besieged population, which included limiting cash flow to and severing ties with banks in the strip.

On another occasion, Salem learned that one of his friends was traveling from London to Gaza, “so I asked another European news agency I was working with to transfer the money to my friend’s account in London, and in return, I will get the money in cash from my friend here in Gaza,” he said. The process took three months to complete.

Journalists who work for Gaza-based news agencies face their own share of financial challenges. Due to the limited job opportunities in the strip, younger reporters are often taken advantage of, as in the case of Shoruq Shaheen. Shaheen said that the local news agency she used to work for would mistreat her for her lack of experience, and would send her to the field to report without paying her. When they eventually did compensate her, it would be an inadequate sum after a long wait, “like once every three months,” she explained. 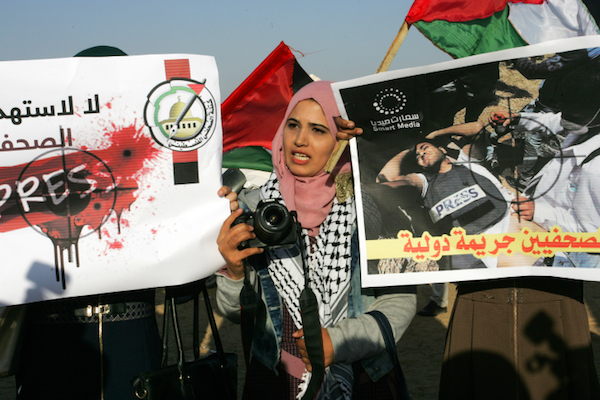 Palestinians protest against the killing of journalist Yaser Murtaja near the Israel-Gaza fence, in Rafah in the southern Gaza Strip, on April 8, 2018. (Abed Rahim Khatib/Flash90)

Hind Khoudary reports for RT and Kuwait TV from Gaza. She takes pride in being self-trained; she remembers reading journalism books and observing other journalists report in front of the camera. “I kept writing small paragraphs on Facebook and Twitter, then an article that became a story,” she said, until news agencies picked up her writing.

Khoudary has been covering the Great Return March protests since they began last March. Based on her experience in the field, Khoudary found that psychological support for journalists is severely lacking in Gaza.

Unlike foreign journalists, who leave Gaza once their work is done, “we are in the field most of the time. On Fridays we are at the borders covering the protests. On Saturdays covering protesters’ funerals, sometimes our colleagues’ funerals. On Sunday writing stories about wounded protesters,” said Hind. According to the Gaza-based Al Mezan Center for Human Rights, as of October 12, 215 Palestinians have been killed in Gaza, including 33 children, two journalists, and three paramedics.

If a Palestinian journalist is arrested or detained by Palestinian authorities for their reporting, the media agency they work for could also risk being shut down, Khader said.

What more, the Palestinian Journalists Syndicate does not provide the required protections to journalists in those cases, Khader explained. She hopes the Syndicate will play a more effective role in protecting journalists from violations, and determine a financial standard to press reports that would prevent the exploitation of journalists.

Dina Suliman Saeed is a Palestinian journalist, born and raised between Gaza and Egypt. She studied mass communication at October 6 University in Egypt. 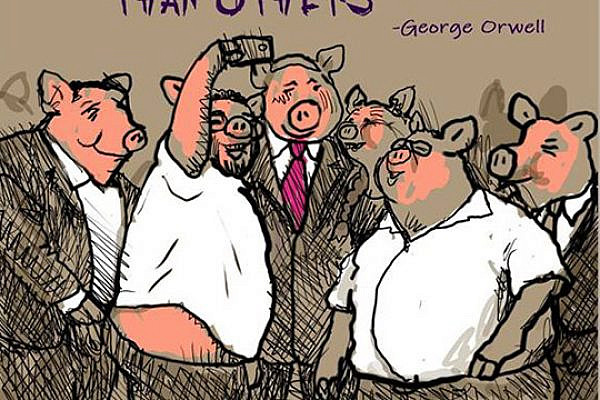 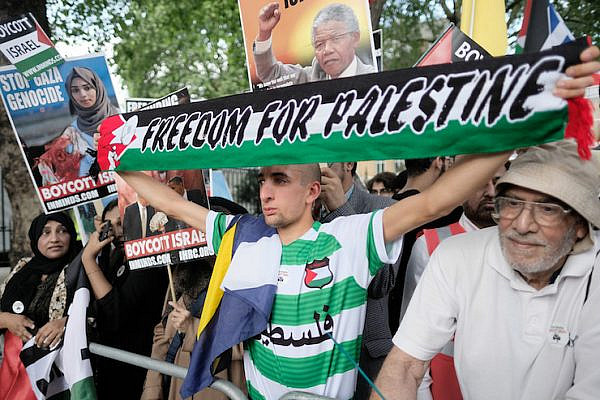 New anti-Semitism definition denies Palestinians’ right to challenge oppression
Those attacking the UK Labour party for its newly adopted definition of anti-Semitism are contributing to the silencing of Palestinian voices, the potential criminalization of their struggle against racist Israeli policies, and the negation of their demands for freedom and equality. By Laila Naheel and Hussein Samih A furor over a newly adopted definition of…
By +972 Magazine July 26, 2018