Bethlehem’s Aida refugee camp is located right next to the separation barrier and the massive Israeli checkpoint known as 300. As Aida is subject to frequent raids by both Israeli soldiers as well as Palestinian Authority forces, it sees regular clashes.

A young woman who lives in Aida told me that last week, when Israeli forces entered the camp, she and other girls threw stones at the soldiers. Before the soldiers had a chance to arrest or shoot at them, the girls scattered, running into any house they could.

The young woman told me that while an elderly woman let her into her home, the old lady scolded her. “Girls shouldn’t be throwing stones,” she said. “That’s the boys’ job.”

“But all the boys do is sit inside, typing on Facebook,” my acquaintance protested. 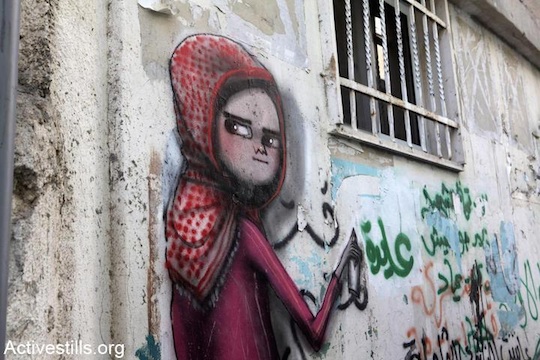 She added that while some people consider advocating for Palestine on social media a form of resistance, she doesn’t feel that it’s making a difference on the ground here. Or at least it doesn’t make a difference from her perspective, as a refugee who lives in the West Bank, who passes through military checkpoints every day, whose right of return seems like a distant dream even though it’s guaranteed by UN resolution 194.

The young woman threw stones because she felt there is nothing left to do. She is fed up with everyone: the Israelis, the PA, the Palestinian political parties, Palestinian leaders (or a lack thereof), the international community; the people who spend time on their computers rather than making a revolution; those in her society who think women can’t or shouldn’t fight for their rights when there is an occupation to fight; those who think that fighting the occupation is a man’s work.

The media plays a role in the latter, she says. “All you ever see is pictures of boys throwing stones,” she told me. “What about us?” By depicting the Palestinian struggle as a man’s struggle, it creates and reinforces the idea that women can’t or shouldn’t participate.

I could draw some conclusions here about how this moment shows the many obstacles that make a Palestinian intifada unlikely. Or I could be optimistic and say something about one woman and her hope. But maybe there’s no larger lesson here. It’s just another day in the refugee camp.

Related:
‘The NY Times’ investigates a Palestinian hobby
When the stones fly the wrong way

emailemail
Before you go…
A lot of work goes into creating articles like the one you just read. +972 Magazine is nonprofit journalism, owned by many of our writers, editors, and journalists. In order to safeguard that independent voice, we are proud to count you, our readers, as our most important supporters. With your support, we can keep +972 Magazine a strong, independent, and sustainable force helping push the global discourse on Israel/Palestine.
DONATE
More About Israel