Uriel Ferera, who was jailed by the IDF for refusing to serve in the occupation, managed to call his mother after a few days in prison. The following is his experience, in his own words.

Jailed Orthodox conscientious objector Uriel Ferera managed to call his mother Ruti last Thursday and told her about his first days — in military “Prison 6” — since declaring his refusing to serve in the IDF. Ruti recorded the conversation and uploaded it to the Internet (listen to the Hebrew recording here):

On Sunday night (April 27, 2014) I went into Prison 6 in Atlit. At first, I refused to put on a uniform, and as a result, I was left without clothes aside from underwear, socks and a shirt. I panicked and cried – I felt horrible. I didn’t want to put on a uniform even though they were yelling at me and told me to stop playing around… I couldn’t get up and I was shaking; the only thing I was able to do was to pray and to recite psalms.

They physically dragged me to the [prison] wing, where they left me and pressured me to put on a the uniform. Despite it all, I didn’t stop praying. They also laughed at me and [told me] to stop praying and said god can’t hear me because he’s too busy, and that he won’t get me out of there. It was then that I realized that if they are humiliating a Jewish boy — like them — in such a way, one can only imagine what they do to Palestinian youths in the territories.

To me they’re like robots; they don’t think, they don’t feel, and they even got pleasure out of the fact that I cried that night. There was no point in continuing to argue with them so I put on the uniform…

They only let me bring in religious books. I couldn’t sleep at night. I didn’t have an appetite the next day, nor did I want to shower. I was anxious all day and I studied Torah and prayed all day.

I was only in the isolation wing for a day and a half, and afterward, they transferred me to Company C. [Now] I am passing time by joking with the rest of the guys. We can read newspapers, there’s television and we can listen to music… I took a book from the military library. On the weekends there’s an atmosphere of Shabbat. I read from the Torah and we all sang Shabbat songs in the mess hall.”

My heart goes out to Uriel when I hear his voice in the recording. There’s something hair-raising about listening to him speak. He describes what he’s gone through monotonously and almost with complete disconnect. He’s a young guy, orthodox, in a foreign and threatening environment, all alone, going up against a system that is doing all it can to to humiliate him, to break him. He was stripped of his clothes, exposed and ridiculed. He almost broke.

But little by little, in a place of great darkness, he found within himself the strength to endure. He’s compromised a little, he’s gotten a little stronger; he’s discovering the humanity inside himself and in his surroundings. And from the intensive pressure levied on him, he managed to make political conclusions about the world around him, which it seems are giving him strength in his own struggle.

Get Our Weekly Newsletter
Before you go…
A lot of work goes into creating articles like the one you just read. +972 Magazine is nonprofit journalism, owned by many of our writers, editors, and journalists. In order to safeguard that independent voice, we are proud to count you, our readers, as our most important supporters. With your support, we can keep +972 Magazine a strong, independent, and sustainable force helping push the global discourse on Israel/Palestine.
DONATE
More About Prison 6

Israeli conscientious objector sentenced to 30 days in prison
After 18 months of service in the Israeli army, Roman Levin told his commanders that he was no longer willing to participate in the oppression of the Palestinian people. ‘When I visited Ukraine, I encountered disrespect toward Jews. This is how my empathy for the Palestinian people developed.’ The Israeli army sentenced 19-year-old Roman Levin…
By Orly Noy February 28, 2019 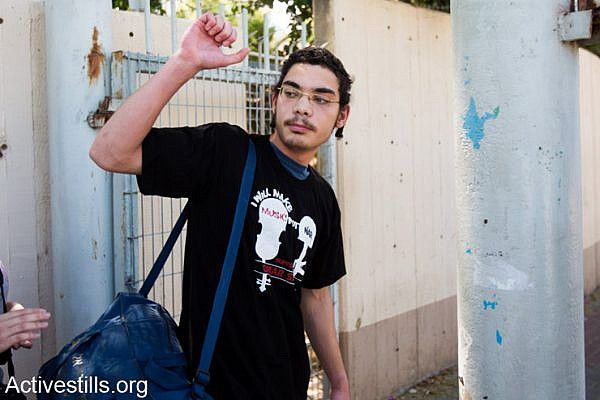