A 21-year-old Palestinian student was killed by Israeli army fire last week. ‘I suppose that just like myself back then, today too, soldiers shoot because that is what their sergeant ordered them to do: to teach a lesson, to remain in charge.’ 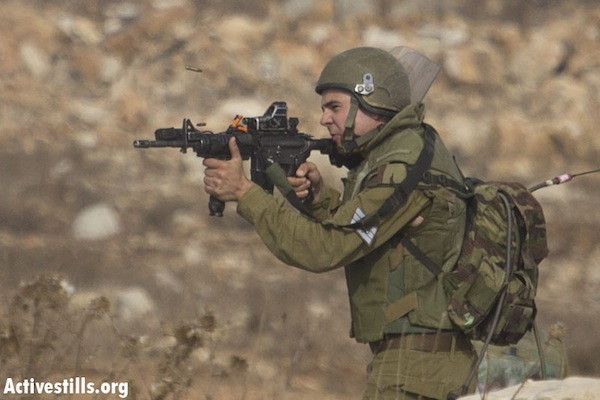 This brings me back to 11 years ago: I was a young soldier, stationed in that precise area – Road 60, Hebron-bound, in the localities of Al Aroub and Beit Ummar.

It was late 2001, shortly after the assassination of “Ghandi” (Israeli cabinet minister Rehavam Ze’evi). We were assigned to secure a section of the road near the Jewish settlement of Karmei Tzur. We were told that the road must be “clean” in the mornings and afternoons when the Jewish settlers from Karmei Tzur drive to and from Jerusalem for work. “Clean,” meaning devoid of Palestinians.

So, what’s the problem? The problem is that 15,000 Palestinians live in the nearby refugee camp of Al Aroub and the village of Beit Ummar. At the time, Palestinians were not permitted to travel on Road 60, except for taxis and vehicles with special permits. But they still had to go about their everyday lives, getting from home to school, to work and to the hospital, which they did by walking along the side of the road. Life, you know.

So how does one keep the road “clean”? Gunfire.

And that’s how it was. At the same time every morning, several forces – either on jeeps or on foot – would set about carrying out this “cleaning” mission. Every group of soldiers had one weapon suited for firing rubber bullets (filled with steel pellets) and a good number of teargas canisters and stun grenades. We would spot people walking along the roadside and throw a grenade at them as we drove past. We’d continue driving, reach some high spot overlooking the road, and stop.

“Sandak, shoot at that taxi over there.”

The first few times I would ask myself, “How come?” “Why?”, but I would still shoot, because it didn’t feel right not to. After all, the He-Man platoon commander or sergeant ordered it, so we did it. Again and again. Every day, twice a day. Drive, throw a grenade here, a grenade there, some rubber bullets into someone’s ass, so they’d learn not to be there when they shouldn’t be.

You need to understand, shooting rubber bullets is clumsy, slow and uncomfortable. So soon enough we proceeded to shoot live ammunition in the air. For example, on a foot patrol we would enter villages and shoot at window panes or solar panels, so they’d learn not to mess with us. And those rude kids would begin throwing stones after a while. Okay, now at least we had some action, some concrete target to aim at.

Shooting live fire became a daily habit. We’d go for a morning round, fire whole magazines, go crazy, throw teargas canisters (at times the wind punished us as the gas blew back in our faces). And if at first we only shot in the air at a 60-degree trajectory, after a while we were aiming directly at walls near people.

Sure enough, within two weeks two Palestinians were killed – one during a funeral procession and another during one of our “street cleanings.” The inquiries that followed were shallow. One soldier was sent to “chill out” on kitchen patrol and then returned to normal activity. The other soldier got nothing.

I describe here in scant passages a period of half a year. There were dozens of cases in which Palestinians were wounded by our rubber ammunition, and hundreds inhaled teargas on a daily basis. We would enter villages every day, chase children and youths in the hope of catching some flailing “prize” as we fired at windows and solar panels. The Wild West. Not once in that whole time were we targeted by gunfire. On one single occasion a Molotov cocktail was thrown at us and didn’t hit anyone.

In the past three weeks, at least six Palestinians have been killed by Israeli army fire. These were not terrorists. Last week it was a 21 year-old female student. But that does not matter – this is simply how it works. These are too many instances of soldiers who are quick on the trigger. I suppose that just like myself back then, today too, soldiers shoot because that is what their sergeant ordered them to do: to teach a lesson, to remain in charge.

Dor Sandak is an activist with “Breaking the Silence.”

More testimonies of opening fire at unarmed Palestinians in the Occupied Territories can be found in the “Breaking the Silence” testimony database at www.breakingthesilence.org.il