As Hallel Rabin stood before the IDF conscientious objectors committee two weeks ago, the military body that decides whether or not she would be sent back to prison for refusing to serve in the army, she was asked the strangest of questions: “Would you agree to wear the army uniform if it were pink?”

“I don’t have an issue with the color,” she responded, “I have an issue with wearing an army uniform — regardless of the army.” A conscientious objector, Rabin was still in military prison for refusing to serve due to the army’s occupation policies. On November 20, Rabin’s fourth stint in military prison came to an end; a day later the army officially gave her the discharge she had wanted. She served a total of 56 days behind bars.

Rabin, 19, from Kibbutz Harduf in northern Israel, was first imprisoned in August after appearing before the committee to appeal for an exemption. She was tried and sentenced to two different periods of incarceration, including during Rosh Hashanah, the Jewish New Year. Upon her release last week, Rabin thought she would be going home for a brief stint before another sentencing. But when she turned on her phone, she received a message from her attorney, Adv. Asaf Weitzen, who informed her that the committee had accepted her request and that she was being released.

As she told Orly Noy in October, Rabin was raised by a mother who taught civics, and began asking herself questions about the reality in Israel from a young age. By the age of 15 she knew she wouldn’t be able to enlist in the army, since doing so goes “against my most basic ideals, and that I cannot support such violent policies.”

Less than a week after her release, Rabin has yet to get used to life outside prison. She wakes up every day at six, as is required on the inside, and answers the hundreds of messages she regularly receives from across the world. I met her this week in Harduf for a conversation about refusing to serve in the army, her time behind bars, and the possibility of talking to young Israelis about refusal.

How did you end up in prison? What did your refusal look like?

“On the day of my enlistment, I arrived at the conscription base knowing that I was going to jail. That was my goal, but I didn’t really understand how to go about it. I started the conscription process but did not know whom to turn to [to refuse]. I sat down on a chair and loudly proclaimed: “I need you to bring someone who will know to tell me what to do. I am a conscientious objector and I need to go to prison and I will not become a soldier.

“Finally, a nice woman took me to an office where I signed a paper saying I was refusing to serve. I found it amusing that my goal was to go to jail, and that once I was there I would be in the right place.”

Rabin was initially sentenced to seven days and was sent to the women’s ward of Prison Six, a military prison in northern Israel. “It was the longest, most exhausting day of my life,” she recounts. “It took me three days to understand what was going on, how to respond [to the prison authorities], how to get around. I learned fast.”

“It was a crazy experience. I was in a cell with a Border Police officer, a woman who served at a checkpoint, two women who refused to serve as surveillance monitoring operators, one woman who had attacked her commander, and a military police officer who went AWOL. We were six in total.

“The first question they asked me was ‘why are you here?’ I told them, hesitantly, ‘I am a conscientious objector.’ They immediately began asking all the well-known questions: ‘Are you a leftist? Are you pro-Palestinian?’ During my first sentence I learned how to live as a conscientious objector. Every time there was a new group of girls or I went back [to prison], the subject would stir controversy and a great deal of discussion.”

Did the soldiers and commanders in jail talk to you about your decision to refuse?

“There is not one soldier who didn’t hear my story. Even the commanders were interested. There was one officer who told me that she appreciates my decision and even praised me. That was one of the important conversations I had — someone from inside the system understood why I did what I did and had an appreciation for it.

“I didn’t fight with anyone in jail. It was practice for my ego, for my ability to have a conversation, for my ability to be socially flexible. To be in a position in which people disagree with me and in which I feel uncomfortable — almost threatened — but to be okay with that.”

Rabin was released after five days and sent home, where she spent the next 2.5 weeks. “It takes longer to get used to home. In jail there is order in everything, then all of a sudden you’re released. It’s confusing,” she says. “The hardest thing about going back home is returning to jail.” 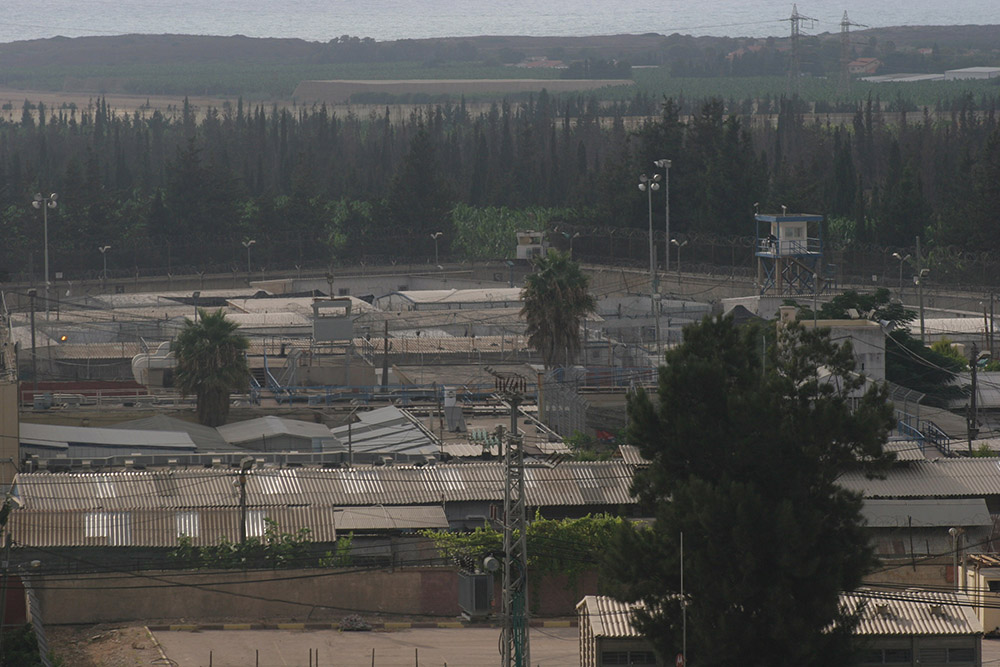 When she returned to the conscription base in Tel Hashomer, she was sentenced to another two weeks in prison — one week for refusal to serve and another for absenteeism. Like other conscientious objectors, after each stint in prison she received another summons to the base and was repeatedly sentenced.

How did you pass the time?

“I read eight books, including ‘Feminism is for Everybody’ [by bell hooks] and ‘Nonviolence Explained to My Children’ [by Jacques Semelin]. My friends Hillel and Tamar, also conscientious objectors, told me half-jokingly that my homework was to find similarities between feminism and conscientious objection.”

Before her third stint in jail, Rabin decided to go public about her refusal with the help of Mesarvot, a grassroots network that brings together individuals and groups who refuse to enlist in the IDF in protest of the occupation. “At first, I hoped that there wouldn’t be any good reason for me to turn to the media. I had hoped to be discharged by the conscientious objectors committee. I thought it would all come to an end after my first sentence,” she explains.

Even before her enlistment date, Rabin tried to approach the conscience objectors committee, which promptly rejected her request for an exemption. During her first period of incarceration, she filed an appeal and waited for the military to return with its reasons for jailing her. When the arguments were late in coming, she decided to go to the media. After her third time in prison, Mesarvot organized a demonstration in support of Rabin outside the conscription base. She was sentenced to 25 days. Between the third and fourth incarceration periods, Rabin was scheduled to have her second hearing before the IDF conscientious objectors committee.

What was the difference between the first and second committee?

“The second time around was longer, they went deep into the details. The first committee asked me questions to try and prove that my refusal was political and based on conscientious objection rather than on pacifism [the IDF has historically made a distinction between conscripts who can prove they are “non-political pacifists,” and those who refuse to serve over what the army deems “political” reasons, such as specific opposition to the Israeli occupation. Despite the difficulties of doing so, conscripts who can prove they are the former have a higher chance of receiving exemptions].

“In the second committee hearing they asked me why I wasn’t wearing my army uniform. I explained that I had come from my home and that in any case I had refused to enlist as a conscientious objector, which is why I never received a uniform in the first place. Even if they demanded I wear it, I would never put on a uniform. They are trying to understand whether your refusal is political or driven by pacifism, how you respond to situations of violence, and what your lifestyle looks like.”

What did you say?

“I was more prepared [the second time around]. Fifty days in prison, daily conversations on the topic, and interviews with the media helped me explain myself.

“I said that I was not willing to take part in any way in a system whose very essence is based on fighting and violent oppression. I believe that this needs to change, and this is my way to make change. This is my small act. I added that I have been vegetarian my entire life, buy second-hand clothing, and am against exploitation, capitalism, and sexism.”

Did you feel that the committee understood that a pacifist objector who opposes violence will also be against the occupation?

“It upsets them. It’s hard for them. They are four members of the army and a civics professor. All of them are 50 years old or older and have dedicated their lives to reaching high positions [in the IDF], and I’m a 19-year-old girl who tells them ‘this is not okay.’ I am sure that it is personally hard for them. I would not enlist in the Swiss army, but I live here and am supposed to serve in the army that commits these acts. I oppose the occupation because it is violent, oppressive, and racist.”

During her second committee hearing, the members showed Rabin a photo of herself taking part in the Mesarvot protest outside the conscription base, which took place just before she was jailed for the third time. The photo showed her holding a sign that read “Mesarvot” [Hebrew for the feminine form of “refusers”] and “Refusing the occupation is democracy.”

“They asked me what the sign meant,” Rabin says. “I said that it is legitimate to oppose issues that have turned into taboo subjects — that opposing them is democratic.”

Activists in Mesarvot told +972 that over the past half year, the conscientious objectors committee has made it much harder to receive an exemption on conscientious grounds as well as to receive explanations when requests for discharge are denied. The organization hopes that Rabin’s discharge will bring about a change in this policy.

Do you feel it is possible to talk to teenagers about the occupation?

“It’s not about age. I don’t need to wait until half my life is behind me to fight for my principles… it is not a bad thing that I say out loud that going to the conscientious objectors committee is a legitimate option and that it is possible to think for oneself. Even prison isn’t bad. It is exhausting but I did not leave with a feeling of anxiety or wanting to die.”

What kind of responses did you receive after your release?

“A lot of people reached out from Israel and across the world. Some people cursed me. Others wrote that [my refusal] was inspirational and brings hope that there are teenagers who stand up for what they believe. Palestinians also wrote to me after [my story] was published in Turkey. Someone from Tulkarem wrote that he appreciates my act and hopes that one day we’ll drink coffee together and talk about life.”