The former Shas chairman was one of the most vocal opponents of African refugees in Israel. But after Yishai was replaced, the party’s attitudes may have changed. +972 speaks to Shas MK Yitzhak Vaknin. 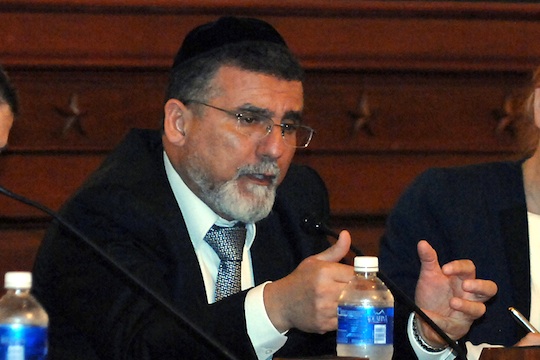 Just over a year ago, then Shas chairman and Interior Minister Eli Yishai declared that until he could deport African asylum seekers, he would “lock them up to make their lives miserable.” In a different interview he claimed that most of the Africans in Israel are Muslims, exclaiming, “[they] think that the country doesn’t belong to us, the white man.”

But a year has passed, Yishai is no longer at the helm of the Shas party or the Interior Ministry. With the appointment of Aryeh Deri as the party’s new chairman, and Shas moving into the opposition for the first time in years, its attitude toward African asylum seekers appears to have come a long way.

Speaking with +972 Magazine on the sidelines of the J Street conference in Washington earlier this month, Shas MK Yitzhak Vaknin expressed much more compassion toward the more than 50,000 asylum seekers and migrants in Israel. “For those who have already entered Israel, you have to find a solution. We need to respect them and help them earn a living. This is completely clear.”

Gone are the combative declarations from the Shas chairman against African refugees. Instead, according to a Haaretz report, Deri has advised his members of Knesset to downplay the issue of African refugees in the party’s rhetoric. This is in life in with Shas’ shift in focusing on ethnic discrimination and other socio-economic problems.

Israel should prevent returning them to their home countries if that means they are at risk of death or abuse, Vaknin said, “Of course we should prevent this and help them integrate.”

Vaknin also discussed a recent groundbreaking Supreme Court ruling striking down a law that allowed imprisoning asylum seekers for three years without trial, a practice which Vaknin declared his opposition to. “As a Jewish nation this is a disgrace,” he said of the administrative detention.

At the same time, the Shas lawmaker clarified that he is interested in finding a solution that stops the continued flow into Israel of African refugees. Nevertheless, the remarkable shift in tone from Yishai last year to Vaknin today is glaring.

The recent Supreme Court ruling has pushed the refugee issue back on the agenda in Israel clarifying that the strategy of locking up asylum seekers for years at a time as a deterrent to others or as a solution to the influx is unconstitutional.

It remains unclear whether Shas’ evolution represents a changed ideological platform or merely smart politics, and that is even harder to ascertain with the politically savvy Deri in charge.

Aaron Magid is an M.A. candidate at Harvard University specializing in Middle Eastern Studies. He is a staff writer for the Jerusalem Review of Near Eastern Affairs. His work has previously appeared in the Daily Beast, Jerusalem Post, and the Forward. He can be reached via Twitter @AaronMagidha.