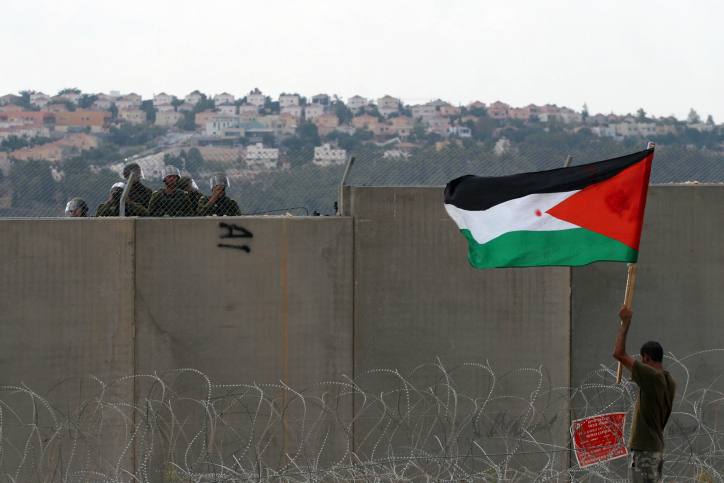 A Palestinian protester holds the Palestinian flag near the Israeli separation wall as Israeli security officers look on during a protest in the West Bank village of Bil’in near Ramallah on September 9, 2011.
(Issam Rimawi/Flash90)

Ten years ago, United States federal prosecutors shut down what was then the biggest Muslim charity in the country, a foundation supporting Palestinians refugees. Authorities seized all of the Holy Land Foundation’s assets and put five of its leaders in prison.

Over the past decade, the case has set into motion a broad and powerful effort to criminalize and sanction Palestine advocacy in the United States. It created a chilling effect that forces many Americans to think twice before supporting Palestinian or Muslim charities to this day.

Shortly after the September 11, 2001 attacks, the FBI raided the offices of Holy Land Foundation. In 2004, federal agents arrested five of the foundation’s leaders on charges of funneling material support for a designated terrorist organization — Hamas. After a second trial — the first resulted in a mistrial — they were sentenced to prison, two of them to 65 years.

“The mainstreaming of the idea that support for Palestinians is something that should be scrutinized originates with cases like Holy Land,” said Diala Shamas, an attorney at the Center for Constitutional Rights.

“It starts with the material support framework, where any kind of support for Palestinians is labeled and smeared as support for terrorism, but you see that in the rhetoric today, it’s everywhere,” Shamas added.

Material support laws are intentionally kept vague and broadly-defined, and they have had a significant chilling effect on several civil rights issues in the United States, according to Shamas.

Furthermore, targeting the Holy Land Foundation had a very intended political effect; it mattered that the government was not only going after what was at the time the largest Muslim charity in America, but also one that was focused on providing relief to Palestinians.

“These people were convicted for providing charity,” Nancy Hollander, the defense attorney who represented Abu Baker, told +972. “They were never charged with, convicted or arrested for any violent act. The government chased every dime that they spent, and knew where it all went, and it went to charity. It’s just that the government’s position was that they were feeding the wrong kids.”

Holy Land Foundation for Relief and Development was established in 1989 to provided humanitarian aid primarily to Palestinians in need, through zakat (charity) communities in the West Bank and Gaza.

The first court case in 2007 resulted in a mistrial, after the government failed to convince jurors that the charity supported Hamas in any way. But at the end of the second trial, two years later, Shukri Abu Baker, Ghassan Elashi, Mufid Abdulqader, Mohammad El-Mezain and Abdulrahman Odeh were convicted on 108 charges for providing more than $12 million to Hamas.

In both trials — and for the first time in the history of American criminal trials — a witness was allowed to testify anonymously. The defense was not allowed to know his name or identity, and could not research the veracity of his statements. His anonymity extended even to the judge. With that decision, the constitutional right to confront one’s accuser was “totally violated,” Hollander wrote in a 2013 article.

“The law did not matter. The facts did not matter. What mattered was that these were Palestinian men providing charity and feeding Palestinian children and in the name of national security we simply could not let it happen,” she explained in the article.

During these trials, however, not a single charity that the Holy Land contributed to was on the designated terrorist list in the U.S. In fact, USAID and UN agencies were supporting some of those very organizations as well.

The case affected the five men, their families and communities, and the very notion of charitable giving. “I regularly advise people on how they have to navigate these laws, and the mere fact that they have to seek legal opinions before making a donation is debilitating,” said Shamas.

“The efforts to undermine advocacy for Palestinian rights today — which include laws that punish boycotts, lawsuits targeting nonprofits working in Palestine, and massive smear campaigns to intimidate people into silence — are extensions of such criminalization” as in the case of the Holy Land Foundation, said Dima Khalidi, founder of the Chicago-based Palestinian rights advocacy group, Palestine Legal.

As of November, 26 states have enacted anti-BDS laws. Last year, a group of Republican and Democratic senators attempted to pass the Israeli Anti-Boycott Act that would have made it a felony to support the international boycott of Israel. The bill didn’t make it through that time after civil liberties groups intervened, but just a few days ago Democratic senator Ben Cardin of Maryland tried to slip the anti-boycott law back into a spending bill.

Correction: An earlier version of this article mistakenly noted that the anonymous witness was only introduced in the second trial. The witness had testified in both the first and second court cases. The article was also updated on Dec. 10, 2018 to reflect the most recent information available on anti-BDS laws enacted in the United States.