In a series of posts based on field visits and meetings with migrant workers in Israel, Noa Shauer and Shiraz Grinbaum highlight the conditions, hardships and exploitation of foreign workers. In part 2, a Thai worker and labor organizer at Moshav Sde Nitzan is deported for organizing a strike over working conditions. 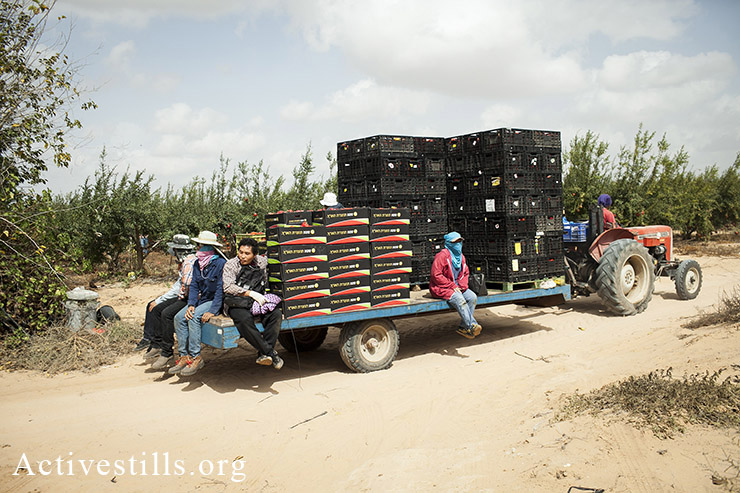 Thai workers on a tractor on the way to start their working day, early hours of October 18, 2013. (Shiraz Grinbaum/Activestills.org)

Moshav Sde Nitzan is located in the northwestern Negev, a part of the Eshkol Local Authority. The moshav, a farming community, is made up of some 80 families, as well as 157 foreign workers from Thailand who work in agriculture. Following a request by the foreign workers there, staff from ‘Kav Laoved – Workers’ Hotline’  toured the grounds of the Moshav on September 10. We discovered that the workers had begun a strike to protest their low pay and late payment of their salaries. The workers had been receiving NIS 120 for an eight-hour work day and NIS 17 for an overtime hour, even though the minimum wage per non-overtime hour in Israel is NIS 23.11, and pay for overtime hours is 125 percent of one’s hourly salary for the first two hours. With a minimum wage salary, for instance, the hourly wage for overtime is NIS 28.88 per hour.

Kav LaOved instructed the workers to compile a list of demands for their employers, and specifically to demand a fair daily wage. They first demanded a NIS 130 daily wage, but Kav LaOved explained to them that this amount was significantly lower than the legal minimum wage, and that it was their responsibility to demand at least what is guaranteed by law. The workers then tried to demand minimum wage, but it was too late – on the same day of the strike, the employers agreed to raise the daily wage of the foreign workers to NIS 130 per day and to NIS 20 per overtime hour.

When the employers reported the strike to the agency responsible for bringing the foreign workers into Israel, the agency decided to send representatives directly to the moshav. They located the worker who they believed was the strike leader, instructed him to pack his bags and took him by force to their offices. There, the worker was required to sign documents in Hebrew and was then immediately sent to the airport. At the airport, when it became clear to the worker that he was being deported, he contacted Kav LaOved. Though it was nearly an hour before the flight, Kav LaOved’s staff explained to the worker that the expulsion was illegal and that he did not need to board the plan. Nonetheless, the worker, sure of his prospects of returning to work, decided to board the plane and return to his country. 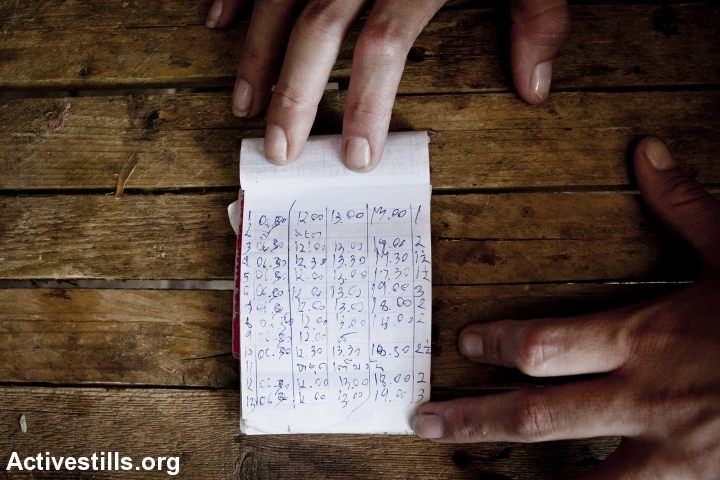 Illustrative Photo: A small notebook with a table showing working hours, written down by a Thai worker, Moshav Ahituv, July 13, 2013. Thai workers are advised to write down their hours so they can keep track of the hours paid by their employers.

After the deportation, the rest of the workers on the moshav, fearful that they were next in line, decided to end the strike, accept their employers’ conditions and return to work. When Kav LaOved staff visited them again in order to hear their claims and to express solidarity with their struggle, they were surprised by the excited reaction of the workers. The staff realized just how important it was for the foreign workers to know that there were others who supported their courageous act.

During the visit, the workers also requested more information about their social rights. In particular, they wanted to learn more about the minimum wage, overtime hours and how to open an Israeli bank account. They also requested information about how exactly to leave their jobs without being accused of evasion. Kav LaOved staff gave the workers resignation forms in Thai and in Hebrew and explained to them the correct way to file one’s advance notice of resignation.

During the visit, the workers urgently wanted information about how to respond to threats of deportation. This was not only due to the deportation of the strike leader. Their employers regularly threaten them with deportation to Thailand if they don’t behave as they are told. The Kav LaOved staff explained that it is absolutely forbidden to deport workers as long as they are in Israel legally for less than five years and three months. 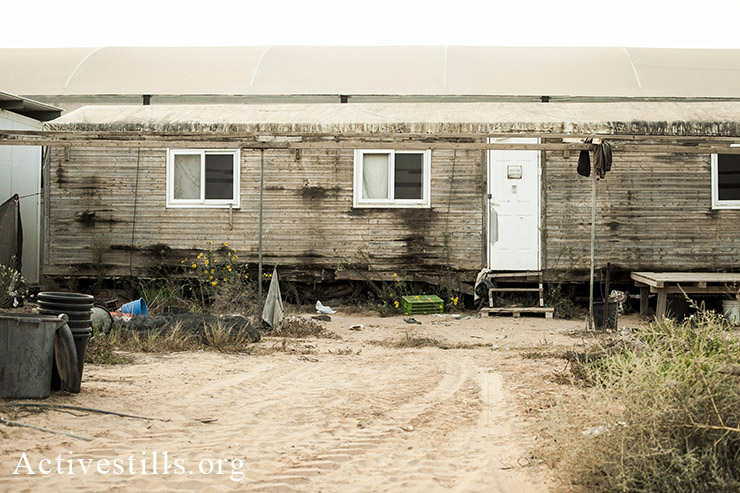 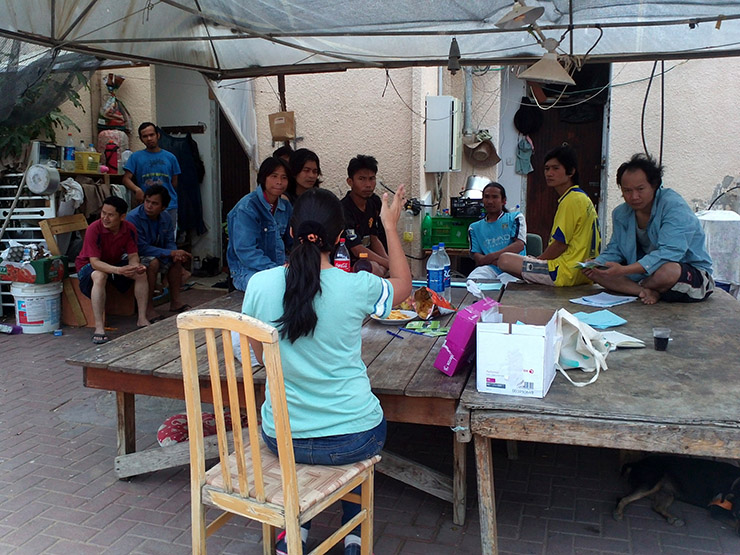 The following is an in-depth description of the conditions of foreign workers at Moshav Sde Nitzan:

The workers at Moshav Nitzan work 10 to 12 hours a day, including a lunch break. At times, they work on Saturdays, which is considered overtime. The workers never had Israeli bank accounts opened for them, though Israeli law mandates that employers open bank accounts for their foreign workers. Only some of the workers receive pay slips from the moshav. An analysis of the pay slips showed amounts of overtime hours that differ from the number the workers themselves report to have done.

The workers pass along their salaries to agents who take their cash earnings and transfer them to Thailand for a 2 percent commission. The workers receive a text message that indicates how much money was transferred to Thailand, and some receive a receipt of the money transfer. The receipt shows that a resident at the moshav opened a business in order to facilitate this money transfer.

The residences that the Kav LaOved staff visited seemed adequate, which is important to mention. The residences are 2-3 room apartments, made out of concrete and built beside each other in two long lines. In between the apartments there is a shared open space and a bomb shelter, which serves also as a common area on cold days. In each of the apartments, there are refrigerators, closets, and bathrooms. The workers live two to a room, so that there are between four and six workers sleeping in each apartment.

The Right to Medical Treatment

The workers explain that when they are sick, the employers sometimes take them to doctors, if their medical situation requires it. It was discovered that the workers’ HMO cards are all held by their employers, and that when they have a medical issue they must request them from the employer.

No employer has the right to hold an employee’s documents, especially those as important as medical documents, which must remain in the hands of the worker himself. It is possible that the employers assume that the workers do not know what to do with documents in Hebrew, and so they do it for them. This situation is likely to become complicated when workers do not want to reveal their condition to their employers or want to go to the doctor without permission, such as when a female worker does not want to share with her employer that she is going to see a gynecologist. By holding these documents, the employers put their workers in a position where they are absolutely dependent on their employers for medical needs.

emailemailemail
Before you go…
A lot of work goes into creating articles like the one you just read. +972 Magazine is nonprofit journalism, owned by many of our writers, editors, and journalists. In order to safeguard that independent voice, we are proud to count you, our readers, as our most important supporters. With your support, we can keep +972 Magazine a strong, independent, and sustainable force helping push the global discourse on Israel/Palestine.
DONATE
More About Thai workers 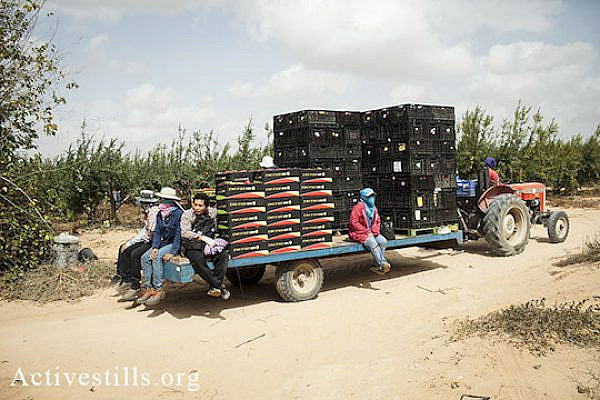 Run out of town for teaching farm workers their rights
Labor advocates set out to explain to Thai agricultural workers what rights they have in Israel. Instead, they are intimidated and chased away by the workers’ employers. By Angie Hsu In the rush before leaving Tel Aviv for the Arava Desert Friday morning, I ran into the bathroom and grabbed two bottles of sunscreen. It…
By +972 Magazine March 11, 2017 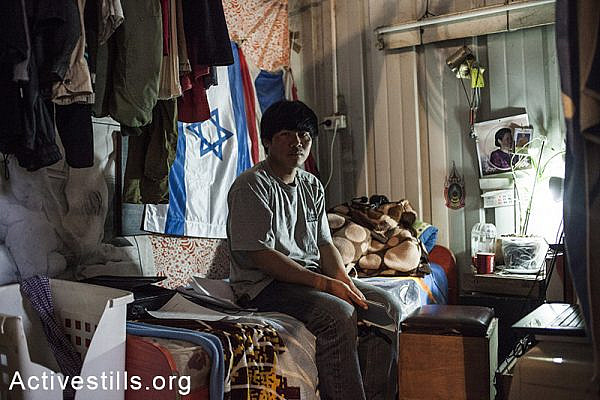 Home Field: Visiting agricultural workers in Israel, part 3
In a series of posts based on field visits and meetings with migrant workers in Israel, Noa Shauer and Shiraz Grinbaum highlight the conditions, hardships and exploitation of foreign workers. In part 3, agricultural workers in Moshav Yavetz suffer harsh neglect, are stripped of their right to decent pay and live in insufferable conditions. Read part 2…
By Activestills January 31, 2014 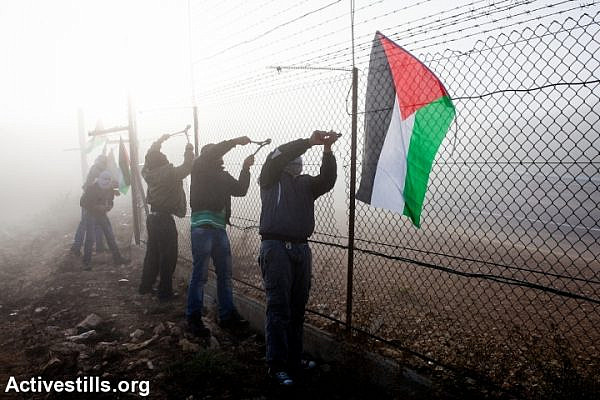 From breaking barriers to waiting in Gaza: A week in photos – November 14-20
This week: Palestinians destroy the separation barrier in three different villages across the West Bank, Bedouin protest the Prawer Plan in the Negev, Bethlehem residents receive demolition orders, animal rights activists pour fake blood all over an Israeli supermarket, and more.                            …
By Activestills November 21, 2013