Last night I had to flee a raging mob not too far from my home in south Tel Aviv. After long speeches of incitement by right-wing parliamentarians, the masses stormed after me and a fellow journalist, and then turned on African asylum seekers, their businesses and their homes. This is how it happened. 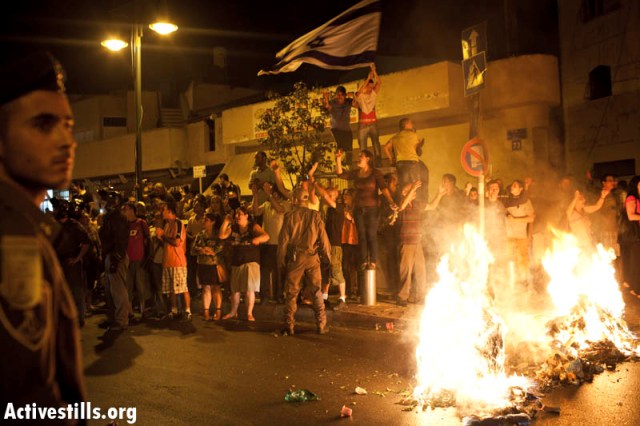 It started out as a fairly quiet demonstration – or demonstrations, to be precise. One small demonstration took place in Shapira, my neighborhood, where several weeks ago an Israeli young man threw Molotov cocktails into asylum seekers’ homes. The dominant discourse here was, as is typical of the neighborhood, more moderate, and focused on blaming the government (and not the asylum seekers) for local hardships in south Tel Aviv.

On my way to the central right-wing demonstration in Hatikva neighborhood, a five minute bike ride to the east, I ran into several dozen demonstrators walking in the opposite direction. It turns out that these were J14 activists from all over the city, who wanted to make a point of the importance of finding solutions to benefit both veteran Israeli communities, struggling to make a living and fearing a rise in crime, and the masses of African asylum seekers who have no jobs and nowhere to go but these parts of the city. They felt unwelcome at the central demonstration and decided to split and form this march.

The central demonstration was organized mostly by Likud activists, which was somewhat strange to begin with, as the protest was officially aimed at the Likud led government. It started out quite peacefully, and a group of us journalists and photographers was standing on the side, somewhat bored and discussing plans for the weekend. On the stage, local residents told stories of attacks they experienced by African asylum seekers, while MKs from the Likud and parties further to the right were placing the blame for all the neighborhoods’ hardships on the asylum seekers and “the left.” The crowd was growing uneasy, but none of us thought that this would turn into anything big. 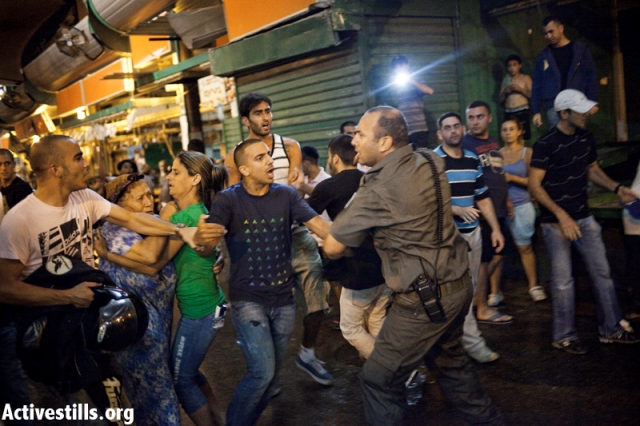 Clashes with police in Hatikva. 17 people were arrested (Activestills)

And then it happened

It all started with one woman who came at me out of nowhere, and started screaming: “You throw stones at soldiers! Shame on you! Get the hell out of here!” I tried to say that I have never thrown stones at anybody in my life, but she was not exactly in the mood for dialogue. “You lie! I see you every week on television throwing stones at soldiers and calling them Nazis!”

From this point on everything happened extremely fast. The one woman turned into two, then a group of ten people, which kept on growing. I tried to explain that this was a misunderstanding, that I never attacked any soldier, that I am a resident of Shapira and a journalist covering the protest. But I was talking to myself. Nobody was listening.

Only four seconds or so must have passed before similar charges were leveled at my colleague, Ilan Lior of Ha’aretz, who was standing next to me. “You too throw stones at soldiers! I drive a bus and every week I see you attacking checkpoints!”  someone yelled. A hand from the crowd grabbed Ilan’s notepad and threw it in the air. Ilan was trying to say that he was never in the occupied territories and that it’s all a misunderstanding, but he too was talking to himself. Nobody was listening.

At this point, about six Border Police officers showed up and tried to stand between the growing mob and the two of us. I hoped this would help, but soon enough an older woman broke through and leaped towards me, beating my chest, back and hands. I started retreating, knowing that I wouldn’t stand a fighting chance against the masses if I tried to stop her. I lost sight of Ilan. He was sucked into the crowd. I had an open road behind me, I could escape. I feared for Ilan. I feared for myself.

I knew no one would come to my aid. Faced with the angry mob and seeing more people coming from behind me and looking for action – I chose flight. A speaker on the central stage was saying how Daphni Leef and her J14 friends were actually the cause of all “our” problems. I was standing near a police car, wondering how I would get my bike back from the demonstration area, when I heard the loudspeakers announcing that “Haggai Matar is here, and he and his mother are traitors who should be kicked out of the country.” This was really time to split and go home. 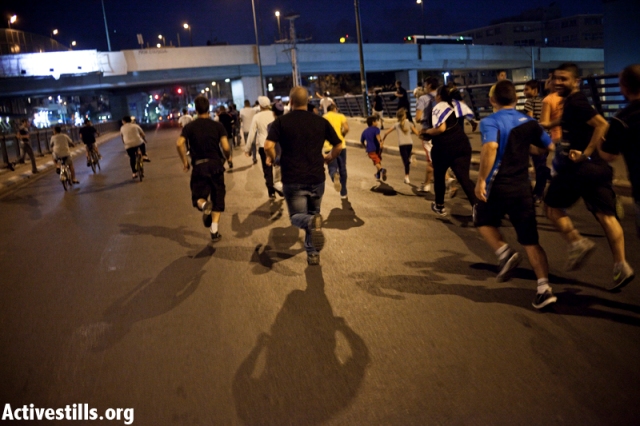 The mob charging the bridge (Activestills)

And then the mob began to charge forward

I was walking back towards my part of town when I heard a massive cry, looked back, and was horrified to see the mass – about 1,000 people strong – racing forward in my direction, screaming “Sudanese to Sudan!” Later, I would find out that Ilan managed to escape the crowd around him, that 20 people started to chase him, and that the 20 soon turned into this horde I was seeing. Ilan was grabbed by policemen who possibly saved his life when they tossed him into a police car and got out of there.

I kept on running and reached the Hagana Bridge, separating the greater part of Tel Aviv from its eastern neighborhoods. It is also the bridge separating Hatikva from Shapira, Neve Sha’anan and LevinskyPark, where dozens and hundreds of asylum seekers sleep at nights. Right now this bridge was – like in old times – the last line of defense between the mob and the area most densely populated by foreigners.

Fortunately, the police realized this, and was successful in stopping the human flow on the bridge. Unfortunately, this was not the end. A car packed with Africans was caught in the crowd, its windows shattered, its riders threatened and saved by police. Seeing this from afar I decided it was time to go home, but reports kept flowing in: the mob turned back into Hatikva and attacked asylum seekers’ businesses and homes, looted at least one store, and attacked random black people on the streets. Seventeen were arrested, but the attacks went on for hours. An Activestills photographer present on the scene later told me that the pictures he took tell only a small portion of the story. He was threatened not to take pictures of looters, and saw so many stones thrown at houses and people beaten (mostly quite lightly) on the streets – that he couldn’t possibly take pictures of it all.

Morning is now up, broken windows of shops and houses need mending, and the peace is somewhat restored. At the end of the day, we must remember that most of the people in our southern neighborhoods largely live together in peace. Many try to bridge gaps and find solutions. Many on both sides know that their enemy is not the asylum seekers or the local Israeli population but the government – which is both creating this impossibly flammable situation and throwing burning matches into it. But this is not the end of the story. It is only the beginning. 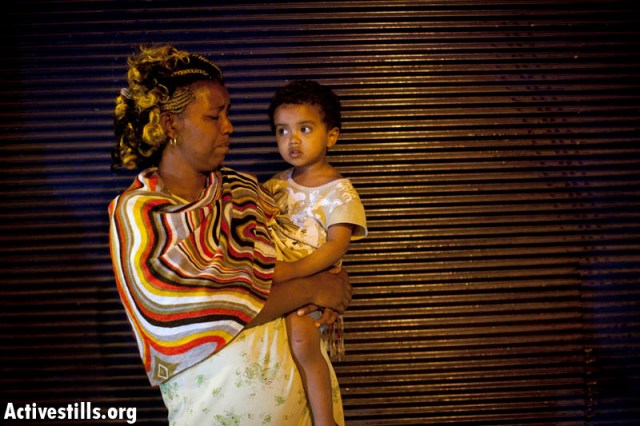 African woman and her child in Hatikva after the riot (Activestills)

Read also:
How mainstream Israeli politicians sparked the Tel Aviv race riot
Africans attacked in Tel Aviv protest; MKs: ‘infiltrators’ are cancer
African kids in Tel Aviv: They’ll do to us what they did to Jews in Germany
Using rape to justify racism