The way to fight a culture that allows sexual exploitation is by calling out the problematic sides of the people we love and admire. Just don’t ditch that logic when watching a Polanski film.

In the heat of the Eyal Golan scandal, in which the famous Mizrahi singer was accused of sleeping with teenage girls, somebody finally came up and said it loud and clear, with no apologizing or beating around the bush: in a comment to his own Facebook status, which concluded with the decisive statement, “the Arsim stole my country away.” Musician Rea Mochiach says:

…and indeed, Dan Ben Amotz paid the price for his weakness and what he did was illegal and shameful. But here lies the difference, because how can you compare his style to that of those ignorant Arsim[i], who have nouveau-riche behavior as their default style? At least Ben Amotz[ii] imparted those girls with some culture, poetry and fine dining and in a way served as a spiritual guide for them; it wasn’t all about Gucci handbags.

You see, Ladies and Gentlemen, inferior sexual exploitation is not like its “cultivated” counterpart, the kind that even endows the exploiting party with a touch of stylish grace, nay, benefits the exploited. Let us put aside for a moment the blatant racism emerging from this paragraph and address an issue that is just as important – how (or how not) to fight rape culture.

There’s just no such thing as appropriate “style” when it comes to sexual exploitation. It’s as simple as that. Doesn’t every boy and girl know about the issue with Zohar Argov[iii]? And so it should be. That’s the way to fight a culture that allows sexual exploitation: by talking about the problematic sides of the people we love and admire. 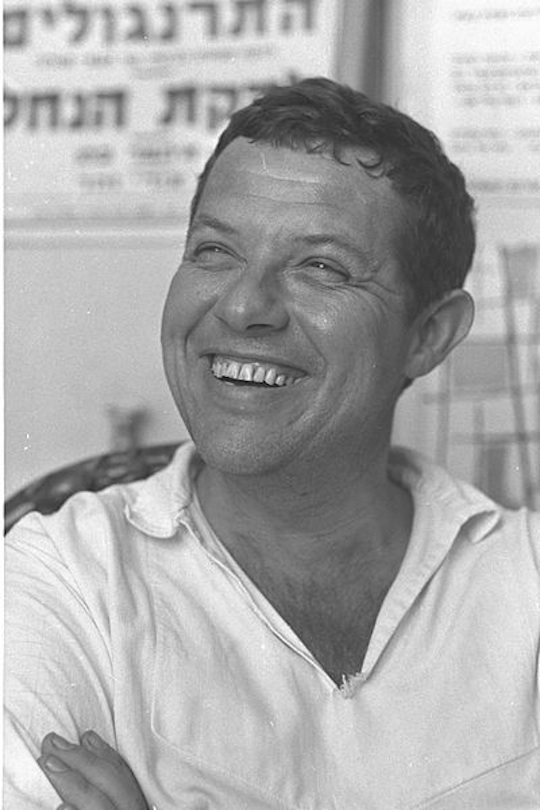 There’s just no such thing as appropriate “style” of sexual exploitation. It’s as simple as that. (Photo of Dan Ben Amotz, by Pinn Hans)

So next time you pick up David Avidan’s[iv] My Electronic Psychiatrist, next time you watch one of Polanski’s films, next time you relish Dan Ben Amotz’s musings or take a peek at the children’s television series “Bli Sodot” [“No Secrets”] Hanan Goldblatt[v], please remind yourself that all those individuals had an active role to play in the rape culture and the objectification and effacement of women and young girls. Because remembering this fact only when it comes to Eyal Golan or Zohar Argov is more than just plain racism; it plays down, above all, the reasons underlying the atmosphere of sexual violence and allows it to persist. It suggests that certain styles or situations render sexual exploitation okay. It means that sleeping with a 16-year-old girl while reading poetry is “no big deal,” nay, may even somewhat enrich her budding personality (budding enough to knock some poetry into, but not so much as to avoid the sexual exploitation thereof). It means there’s an “haute culture” that can remove the tag of sexual exploitation from the act of sleeping with a 15-year-old girl.

If we are to change the reality that makes sexual exploitation acceptable, we might want to start by changing, even in the slightest, the balance of power that allows the rape atmosphere. So enough talking about the victims; let’s start talking to them. In court, rapist and victim give testimony as “equals.” In reality, no equality can ever exist between victims and rapists. Therefore, when we expect “all parties involved to give their version” we perpetuate this balance of power, leaving intact the inherent inequality that allowed the exploitation to occur in the first place.

Publicly speaking, discourse about the victim should only take one form, i.e., listening – without judging or attempting to preach. No 15-, 16- or even 20-year-old girl is ever to blame for her sexual exploitation. No matter what she was wearing or where she is from, and regardless of what her parents do for living or how much she has or doesn’t have in the bank. That’s the point where the perpetrator-victim power balance must be disturbed, denying the perpetrator his right to speak and listening instead to the victim’s testimony. That’s when we must say, “Rapist, shut up. Victim, speak out.”[vi]

Discussing what sets apart one sexual exploitation from another, the notion that there is supposedly a kind of “fine” culture where sexual exploitation is not that bad, nay, might even somewhat benefit the victim, talking about the part the victim had to play in the crime, as if any young girl can be held responsible for this situation – all these combine to allow rape culture to stay alive and kicking. At everyone’s expense.

[i] A derogatory word used to describe Mizrahi men, roughly equivalent to the term “guido” to describe Italian-American men.

[iii] Zohar Argov is deceased Israeli Mizrahi iconic singer who was a drug addict and a convicted rapist.

[iv] A deceased influential Ashkenazi poet of the early years of the state of Israel.

[v] An Ashkenazi actor convicted of raping his young students.

[vi] Inspired Amos Noy’s post about victims’ testimonies in the Yemenite children and other affairs hushed up by the establishment.