The children who survive Operation Protective Edge will emerge to find their previous lives almost unrecognizable, as the families, schools, hospitals and mosques that framed their world are systematically destroyed.

Israel’s ground invasion of the Gaza Strip has seen the child death toll climb so rapidly – at the rate of one child killed every hour – that the exact circumstances of each killing are now barely mentioned in reports. But lists of fatalities, 329 and rising, obscure the reality that awaits Palestinian children in Gaza. Those who survive will emerge to find their previous lives almost unrecognizable, as the families, schools, hospitals and mosques that framed their world are systematically destroyed. 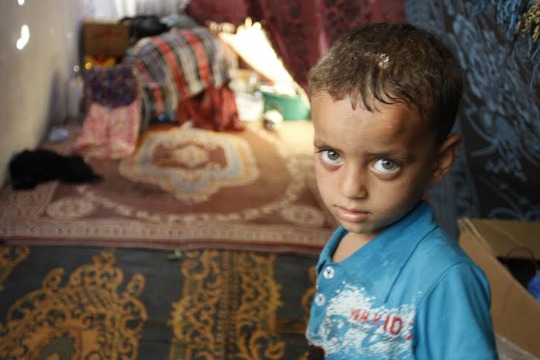 Three-year-old Firas Farhat lives with his brother, father and mother in a makeshift tent on a sidewalk outside Shifa Hospital. Their home in Gaza’s Shejaiya neighborhood was destroyed by Israeli shelling. (photo: Samer Badawi)

Ahmad Tawfiq Ahmad Abu Jami’, an 8-year-old boy from Khan Younis, lived through five previous Israeli military offensives in the Gaza Strip. In 2006, two Israeli military operations claimed the lives of 143 children; in 2008 and 2009, two more assaults killed 385; in 2012, yet another led to 33 more deaths. A total of 561 children killed in six years, according to evidence collected by Defence for Children International Palestine. After surviving five attacks, Ahmad did not survive the most recent one: He died in an airstrike that killed 25 members of his family, 18 of whom were children.

Had he survived, he would have become one of thousands more suffering from the effects of the bombardment. More than 326,000 children, according to the latest UN figures, need immediate, specialized psycho-social support after experiencing the deaths of family members, injury or homelessness. This figure includes children fleeing indiscriminate attacks on residential buildings, driven to UN refugee shelters where intense overcrowding exposes them to potential abuse, exploitation and violence. More than 260,000 people – or 15 percent of the total population of Gaza – are taking shelter in UNRWA schools.

There is no safe space now for children in Gaza. Those who escape death the first time around find in their refuges more death and destruction. Hospitals and schools, theoretically protected from military attack under international law, are targeted indiscriminately by the Israeli military, in attacks described by the UN High Commissioner for Human Rights as tantamount to war crimes. 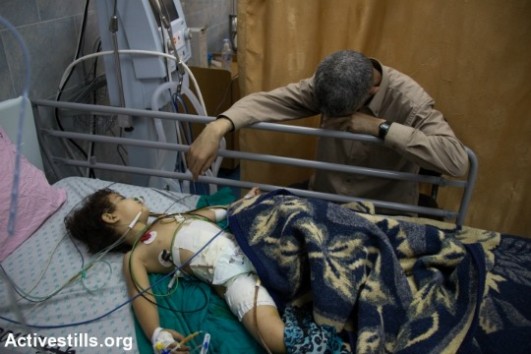 A Palestinian man watches on as a child breathes through a medical ventilator. (photo: Activestills.org)

In Beit Hanoun, an UNRWA school was directly targeted by the Israeli military, killing 15 people, most of whom were women and children. Reports included a mother and her one-year-old among the dead. When the school was hit, the children and their families who had fled there were preparing to evacuate again, with UN staff trying to coordinate a window with the Israeli army for the removal of civilians. The request was never granted.

Children recovering from initial attacks are then subjected to multiple ordeals, such as two-year-old Ibrahim al-Sheikh Omar, who died when shrapnel from an airstrike hit him as he lay recovering from a previous injury in the intensive care unit at Muhammad al-Durra Hospital.

Those who do survive these attacks will continue to pay the price for many years. Amputees like Mohammad Baroud, 12, who lost both his feet in an explosion that killed 11 of his neighbors, will require lifelong medical care and support. The damage wrought on Gaza’s infrastructure is so profound that children needing treatment will be forced to wait while hospitals are repaired and re-equipped with medical supplies.

For the children who manage to escape physical injury, the psychological effects of this latest operation will be hidden, but severe and resounding. Many have lost one or both parents, or other family members. Some have lost their entire extended families. All have experienced violence, fear and instability at close quarters. 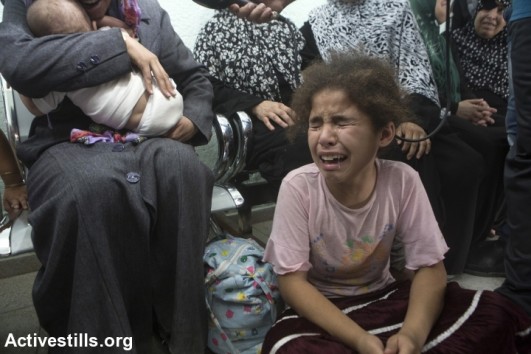 A Palestinian girl cries in Kamal Edwan Hospital, after an Israeli attack on Beit Hanoun elementary school, Jabalyia, Gaza Strip, July 24. The school was being used as a shelter by 800 people. The attack killed at least 17 and injured more than 200 of the displaced civilians. (photo: Anne Paq/Activestills)

As children reel from the onslaught on Gaza, Israeli Prime Minister Benjamin Netanyahu has accused Hamas of “using telegenically dead Palestinians for their cause,” putting the responsibility for every child death squarely on Palestinian shoulders. Meanwhile, the Israeli authorities block public discussion of the deaths of Gaza’s children.

For a generation of young Palestinians, rhetoric of this kind will create a mindset that can only serve to move the region further away from a lasting peace. Those in Gaza who are children now will take their scars into adulthood, potentially shaping the trajectory of the conflict in years to come.

For now, international efforts are rightly focused on an immediate end to the violence. Those who understand the impact of Operation Protective Edge on the lives of Palestinian children, however, will strive for more: for an end to Israel’s ongoing blockade of the Gaza Strip; for a reappraisal of the impunity offered to the Israeli government that allows these massacres to take place. Only then will Gaza’s children be able to pick up the pieces, for the sixth time.

Related:
How a sixth grader from Sderot draws the war
Blaming Palestinians for their own deaths
Dispatch from Gaza: In Al-Shifa, doctors can’t keep up with the wounded

Get Our Weekly Newsletter
Before you go…
A lot of work goes into creating articles like the one you just read. +972 Magazine is nonprofit journalism, owned by many of our writers, editors, and journalists. In order to safeguard that independent voice, we are proud to count you, our readers, as our most important supporters. With your support, we can keep +972 Magazine a strong, independent, and sustainable force helping push the global discourse on Israel/Palestine.
DONATE
More About Gaza children 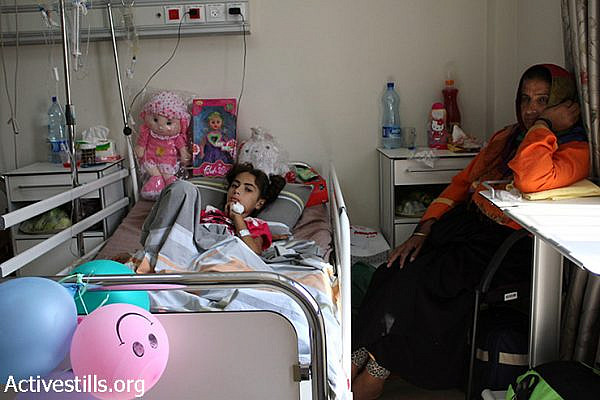 Medical care for children in Gaza headed for the dark ages
What ails the Gaza Strip is not an incurable disease. We know the antidote that could immediately begin rebuilding the structural determinants of children’s right to life and health. By Priscilla Wathington Children in the Gaza Strip today are more likely to develop health problems than ever before but less likely to access medical care. And…
By +972 Magazine April 5, 2018 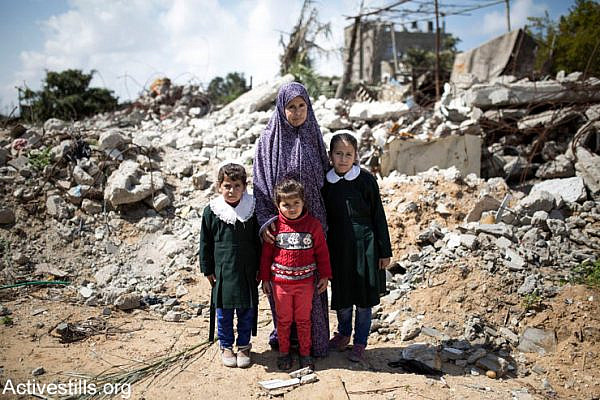 In war, there is no safe place for Gaza’s children
A new report details the harrowing reality for Gaza’s children during last summer’s assault. There came a point early on during last summer’s Gaza war when it seemed we reached a nadir. Four children, all under the age of 12, were killed by an Israeli naval attack while playing soccer on a beach. The boys were…
By Natasha Roth-Rowland April 21, 2015