Palestinian popular committees hold a convention in Nabi Saleh in bid to promote and unite the popular struggle against occupation and apartheid, launching a new type of weekly protest. The demonstration that followed was welcomed by soldiers with the traditional tear gas barrage. 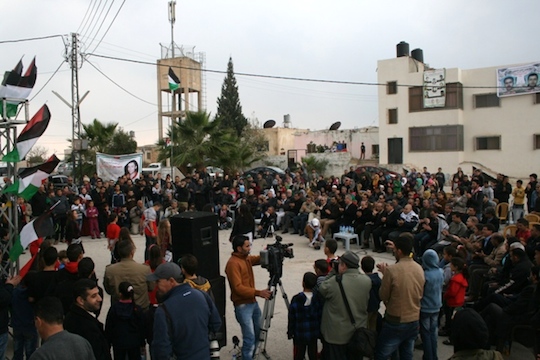 Hundreds gather in Nabi Saleh to commemorate martyrs and the start of the First Intifada, November 7, 2013. (Photo: Haggai Matar)

The popular committees coordinating much of the unarmed struggle against the wall and settlements in the West Bank started a new campaign on Saturday. In addition to the weekly Friday protests in Bil’in, Ni’ilin, Nabi Saleh, al-Ma’asara, Qaddum and other places, each of which focuses on local issues, activists are now planning to hold a central gathering and protest in one of the villages once a month on Saturdays. These gatherings, organized also with Israeli activists (myself included) are meant to solidify existing forces and enhance them in order to promote the culture, tradition and tools of popular resistance.

The first event of this kind took place Saturday in Nabi Saleh. It was a symbolic date: 26 years since the beginning of First Intifada, which many in the movement see as a point of reference, four years since the start of demonstrations in Nabi Saleh, and two years since the killing of Mustafa Tamimi at a demonstration. Coincidentally, all in the same week, the IDF also decided to close the case against Tamimi’s killer, and supporter of the struggle Nelson Mandela passed away. 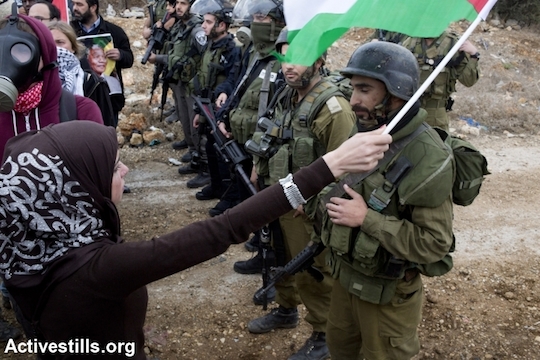 Palestinian, Israeli and international activists confront Israeli soldiers in Nabi Saleh, December 7, 2013. Some protestors made it near the army tower. Three were detained and later released. (Photo: Keren Manor/Activestills.org)

Some 300 Palestinian and Israeli activists, with a few internationals as well, gathered at the village center at noon. Speeches were given in memory of the martyrs and about the lessons of the First Intifada. Speakers also linked the West Bank protests to those against the Prawer Plan and to the jailing of Druze conscientious objector Omar Sa’ad earlier in the week. The small convention was closed with a dance put on by Nabi Saleh youth, followed by a march toward the army tower at the entrance to the village.

As soon as the tower was in sight, and with no provocation whatsoever, demonstrators were bombarded with tear gas canisters and scattered in an attempt to seek shelter. It took some while before the protest reorganized into two groups: one of local youth throwing stones at soldiers from an open field, the other composed of demonstrators marching toward the tower once again. 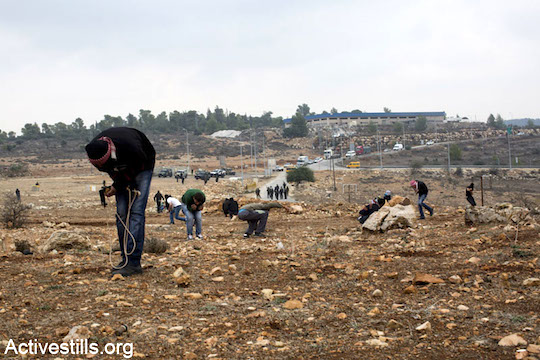 As the soldiers were preoccupied with stone throwers, shooting tear gas and rubber coated bullets at them, breaking the jaw of Mustafa Tamimi’s brother and chasing them into the village, the other group of demonstrators made it to the tower. Three were immediately detained and later released; the others were warned to leave. After a while demonstrators moved on to block the army jeeps that were now trying to exit the village after chasing stone throwers. The soldiers used force to clear the road. At the end of the protest another attempt was made to reach Nabi Saleh’s spring, which has been taken over by the nearby settlement of Halamish, and that too led to an army attack and storming on the village. 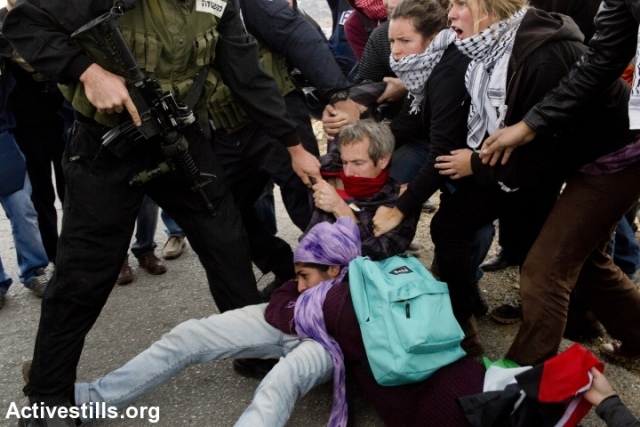 The event ended after about five hours with one person hospitalized. Later, news came in that elsewhere in the West Bank soldiers killed a 15-year-old Palestinian boy by shooting him in the back.

emailemailemail
Before you go…
A lot of work goes into creating articles like the one you just read. +972 Magazine is nonprofit journalism, owned by many of our writers, editors, and journalists. In order to safeguard that independent voice, we are proud to count you, our readers, as our most important supporters. With your support, we can keep +972 Magazine a strong, independent, and sustainable force helping push the global discourse on Israel/Palestine.
DONATE
More About al-ma'asara 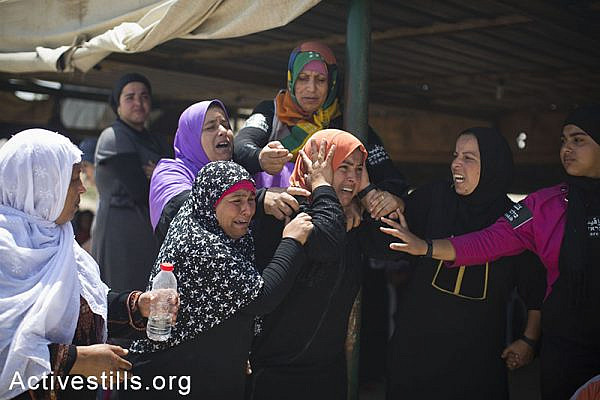 Photos of the week: Devastation for the Negev Bedouin
This week: The Bedouin village of Al-Arakib is destroyed for the 65th time, Palestinians and Israelis commemorate 47 years of occupation, administrative detainees on hunger strike, Israeli soldiers break their silence in public, demonstrations against asylum seekers in south Tel Aviv and more.
By Activestills June 13, 2014 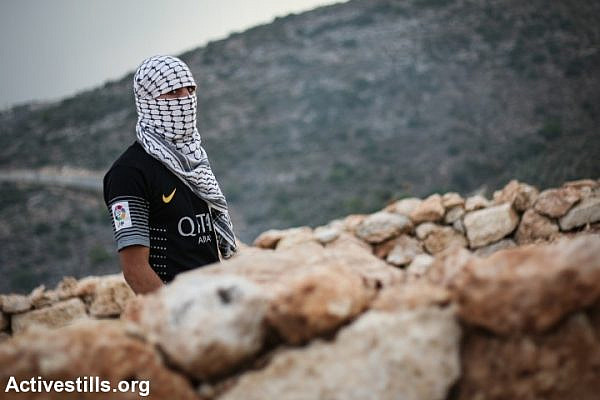 From resistance to existence: A week in photos – November 1-6
This week: Palestinians demonstrate against the Israeli separation wall and U.S. foreign policy, construction and demolition of Palestinian homes, Afghan asylum seekers struggle in Europe, a funeral for a Palestinian who died in Israeli custody, a hearing on the Prawer-Begin Plan, animal rights activists in Tel Aviv, and Palestinians seek water access in the Jordan…
By Activestills November 7, 2013 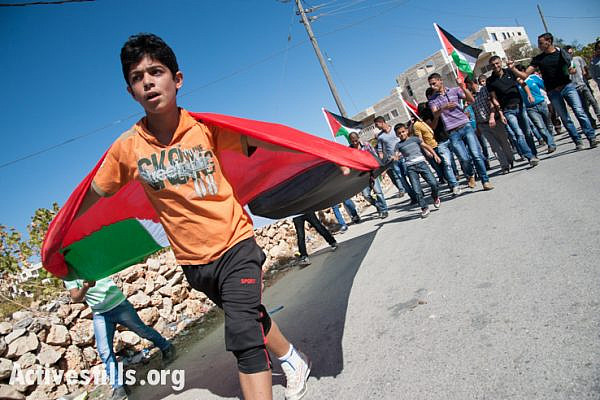 West Bank village marks 7 years of popular resistance
The markedly stone-free protests in al Ma’asara are nevertheless violently suppressed by the Israeli army. “We see the soldiers here with their guns, their boots, their shields and their helmets protecting the wall – but we know the real problem is the wall that is in their minds,” protest leader says. About 200 Palestinian, Israeli and international activists…
By Haggai Matar October 25, 2013