The petition, by a group of prominent Israelis, is a cry for help to the international community, asking it to insist on seeing the Green Line no matter how hard the Netanyahu government works to erase it. 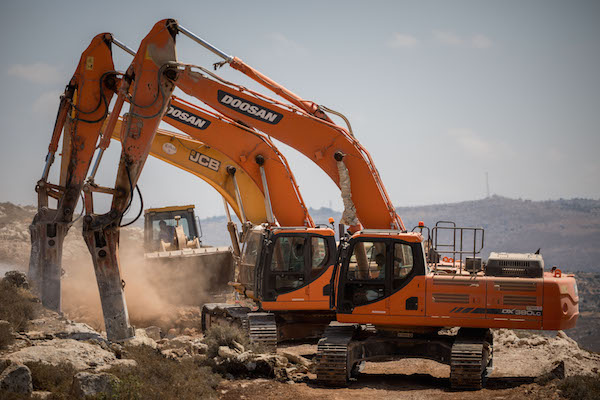 Over 400 Israelis, including a former attorney general, retired diplomats, ex-members of Knesset, and prominent intellectuals, sent a petition to the UN urging it to release a list of companies that do business in or with Israeli settlements in the occupied West Bank.

Israel is reportedly doing “everything [it] can to ensure that this list does not see the light of day.” The UN Human Rights Council began compiling the list of companies last year and it was due to be published in March 2017, although political pressure at the time resulted in the publication date being delayed until December.

The database, or list of companies, has been referred to as a blacklist, and was one of the primary motivators behind the anti-BDS legislation currently making its way through the U.S. Congress.

The petition, authored by the Policy Working Group, points to the UN Security Council Resolution 2332, which called on the international community “to distinguish in their relevant dealings, between the territory of the State of Israel and the territories occupied since 1967.”

“As loyal citizens of Israel,” the petition begins, “[we] believe that the international community has a crucial and urgent role to play in order to redress the Israel/Palestine fast deteriorating conflict. We believe that to serve that end, it is essential that the international community will act against the settlement policy of the Government of Israel, which bars any resolution of this conflict.”

All settlements are illegal under international law, a position that was reiterated by the UN Security Council in its resolution on the matter in late 2016.

The rationale behind pursuing an international policy of calling out companies that are engaged in business with Israeli settlements, explained Policy Working Group chairman Ambassador Ilan, is that “such business relations enhance the environment which sustains human rights violations and stand in contrast with the interest of peace in the Middle East.”

Whether it is possible to differentiate between Israel and its settlements is itself a matter of debate, however. Israeli officials are deliberately chipping away at the very idea that one can boycott or divest from Israeli settlements without harming Israel and its economy.

“If you want to divest from the West Bank – Judea and Samaria – you have to divest from Israel, which means you boycott Israel completely,” Israeli diplomat Ron Brummer said last month, according to a report in Mondoweiss. Strategic Affairs and Public Security Minister Gilad Erdan told the AP last month that a settlement boycott equals a boycott of Israel.

Israel has good reason to fear a settlement boycott. As I wrote a year ago:

[N]ot only is the settlement economy virtually inseparable from the Israeli economy, the occupation is part of the Israeli economy. Blurring whatever remains — or once existed — of the line distinguishing the two has been one of the Netanyahu government’s greatest projects.

The Israeli government’s “you’re either with us or against us” approach to countering the boycott movement, or any accountability for the occupation for that matter, is becoming starker at an almost dizzying pace. One new law denies entry into Israel to foreign nationals who support the Palestinian-led boycott, divestment and sanctions (BDS) movement. Just in the past few days, the head of Netanyahu’s governing coalition introduced legislation that would make supporting BDS a crime punishable by seven years in prison. The list goes on.

The aim of erasing that differentiation is to delegitimize the worldview that believes Israel can (or even should) end the occupation of Palestine, without which the settlements cannot exist. The Israeli Right wants to create a binary, zero-sum equation in which one cannot support Israel while opposing its settlements, and by extension the occupation, even if that means losing a significant number of its supporters along the way.

In their petition to the United Nations, these 430 Israelis are demanding that the world not fall into the Israeli Right’s trap. They are asking the international community to insist on seeing the Green Line, no matter how hard Israel works to erase it.