Three hundred Palestinians have been ordered to leave their homes and take with them all their belongings within the next eight days. Where are they supposed to go? The military order provides no answers. In the meantime, they wait for the rain that refuses to come. 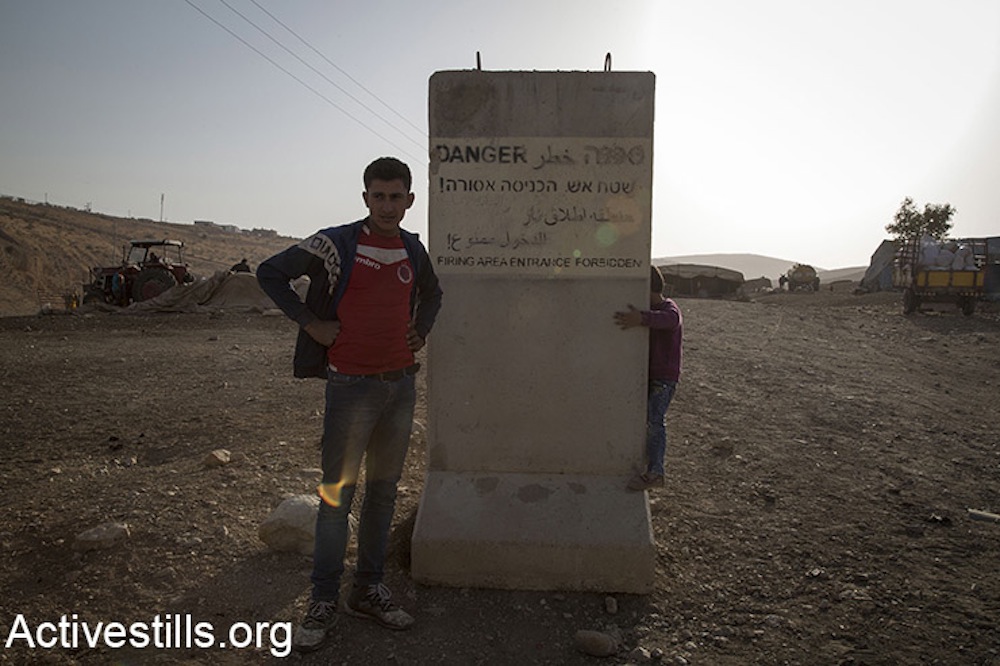 Members of the Daragma family stand next to a cinder block built outside their tent, which declares the area an open-fire zone, and this is forbidden for entry. (Keren Manor/Activestills.org)

They are about to be expelled from their homes but every person I met on our visit to the community of Ein al-Hilweh in the Jordan Valley asked us if there was news of rain. The farmers and shepherds in Ein al-Hilweh and in the neighboring village of Umm Jamal are worried. It is the middle of November, and without water, their herds of cattle, sheep, chicken and other animals are beginning to die of hunger. There is no water to drink. The dry earth does not provide food for pasture. The small community, which is not connected to running water, depends on rain to grow the crops that provide the little food off of which they and their livestock survive.

Because Israel has designated most of the land in the Jordan Valley as as military firing zones, nature preserves, or security areas for settlements, the villagers are forbidden from going almost anywhere; they risk the confiscation of their tractors and livestock by the army if they do. They are forbidden to approach the springs closest to their homes because of the presence of soldiers and the settlers. 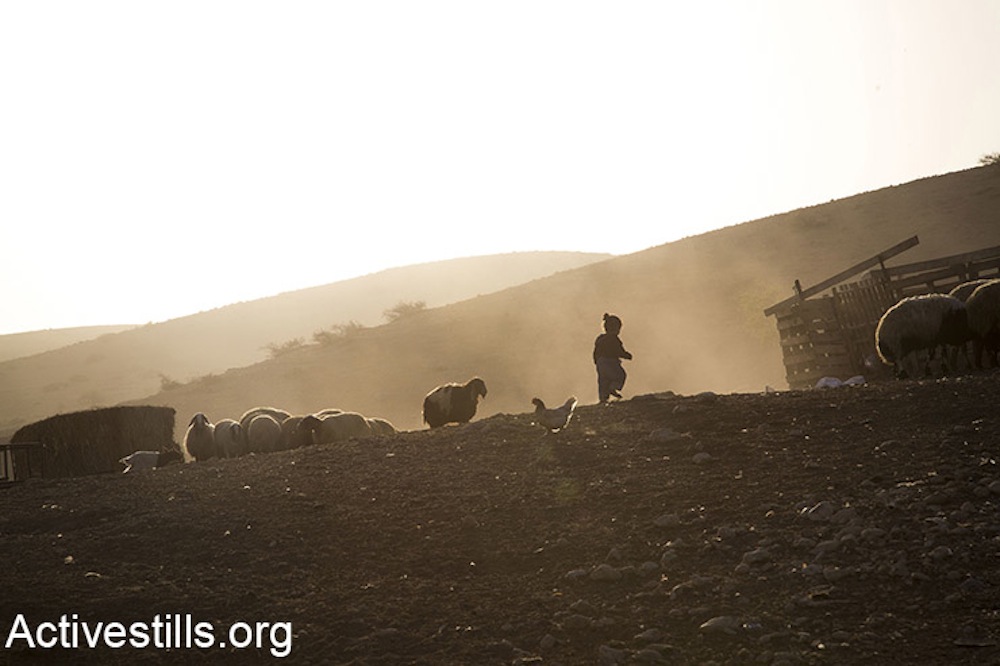 The absurdity of the situation reached its peak, the villagers recount, with the construction of a water pipe by Mekorot, Israel’s national water company, that runs next to the village and provides water to the settlements in the area. The pipe leaks, but if the villagers dare to approach it with their flocks, they risk their livelihood being confiscated by the army. In the reality of the occupation, better to waste water than quench the thirst of the wrong population.

The Palestinians are left with two options: to suffer dehydration or pay NIS 120 (nearly $35) for four cubic meters of water from the nearby villages of Bardala or Ein al-Beida—almost five times what the residents of the settlements pay, and 15 times what Israeli farmers pay for a cubic meter of water for agricultural use.

“It is difficult to make a living from livestock. The situation here is difficult,” said one of the members of the Daragma family, with whom we toured the area. How do people survive? we asked. “Many work in the settlements in the Jordan Valley, mainly in the date groves, for NIS 50-70 ($14-20) for eight hours of work a day.” 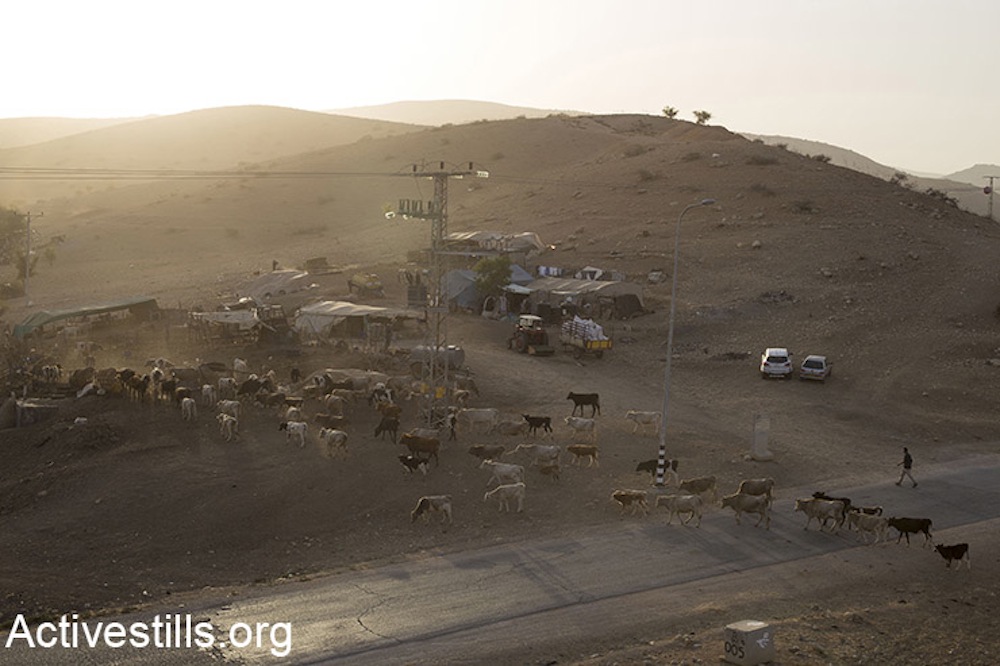 But the gaunt cattle, the starving livestock, the water shortage, and the lack of money are not the only worries of the Daragma family. On Thursday, November 9, soldiers arrived in the village and left on the side of the road, by the homes of the villages’ families, an order “relating to unpermitted structures.” Attached to the order was an aerial photo with the areas of the villages of Ein-al Hilweh and the neighboring Umm Jamal demarcated on the photo. Thirty families live in the demarcated area—300 people in total, with 5,000 animals, as of the date the evacuation order was issued.

The order, signed on November 1 by Roni Noma, commander of Israeli forces in the West Bank, instructs all the residents of the area to remove their property from the area with eight days of the orders’ signing—but how does it work out if the order was placed on the side of the road eight days after being signed? It doesn’t.

The Daragma family has lived in the area since 1967, and before that lived not far away. They show us the document signed by the Jordanian government with the name of their grandfather listed as owner of the land. The rest of the territory covered by the evacuation order, 550 dunam in total, is either privately owned Palestinian land or owned by the Catholic Church. Where are the people supposed to go when they are expelled? Neither the order nor the Israeli government give an answer. 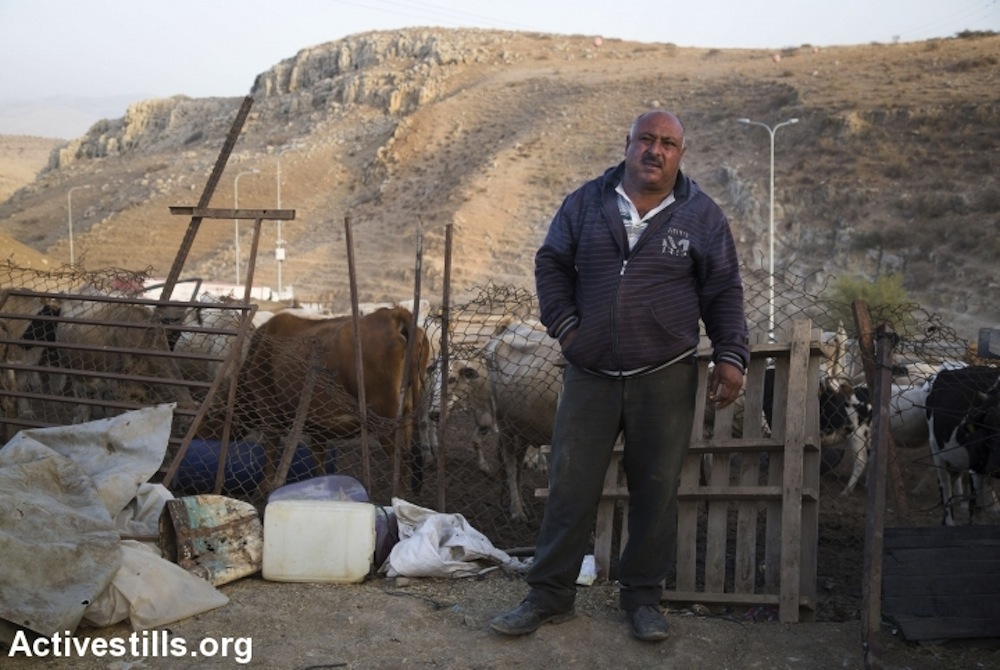 Qadri Daragma, one of the 300 residents of Ein al-Hilweh and Umm Jamal who are facing expulsion. (Keren Manor/Activestills.org)

This is not the first time that Palestinian families in the Jordan family have faced expulsion, but it is the first time the army has used this kind of order, called a “Demarcation Order,” against Palestinians. The order was first articulated in 2003, ironically, to be used against illegal Jewish outposts. The use of this kind of order against Palestinians allows for a quicker expulsion, a wider applicability, and is more expedient when it comes to dealing with Israeli bureaucracy—because it applies to entire communities without requiring detailed inspection of all the structures in an area, which has been the Civil Administration’s practice up until now. 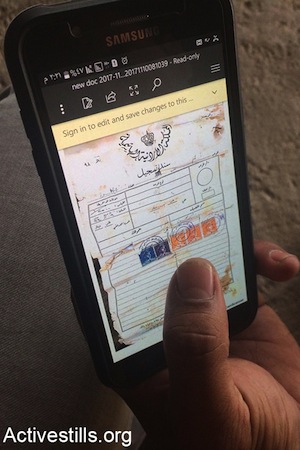 A Jordanian document showing proof that the land on which Ein Al-Hilweh was built belongs to the Daragma family. (Activestills.org)

At a time when the government is busy legalizing formerly illegal outposts and legislating the systematic theft of Palestinian land, it is hardly surprising that the laws meant to enforce legal building in the occupied territories  serve one population and not another. The settlement of Maskiot, established in 2006 for settlers removed from the Gaza Strip, overlooks the villages that stand to be evacuated. To the north and south of these villages there still proudly stand two illegal Jewish outposts—Givat Slait and Um Zuka, which continue to expand despite the orders to halt construction and their residents’ tendency to abuse the Palestinian shepherds.

“The people here are not interested in politics. They just want to live,” one of the Daragma family members said to us. Unfortunately, politics determines the conditions of living—especially if you are a Palestinian.

Just a few days earlier, the same kind of order, also signed by General Roni Noma, was issued against the community of Jabal al-Baba, located in the E1 area between Jerusalem and Jericho. It seems the army has found a substitute to the demolition orders issued by the Civil Administration, which apply to specific structures, as a means to expel entire communities.

More than 1,300 Israelis have signed an online petition created by Zazim that calls on President Rivilin to stop the injustice and the expulsion of the 300 hundred residents of Umm Jamal and Ein al-Hilweh from their homes.

Executive Director of B’Tselem Hagai El-Ad said, “with the orders of the IDF commander in the West Bank in the Jordan Valley and Jabal al Baba we are witnessing a new stage in Israel’s violent process to remove Palestinians from Area C. In the Jordan Valley, in East Jerusalem, in the South Hebron Hills, the fact cannot be ignored: forced expulsion constitutes a war crime.” 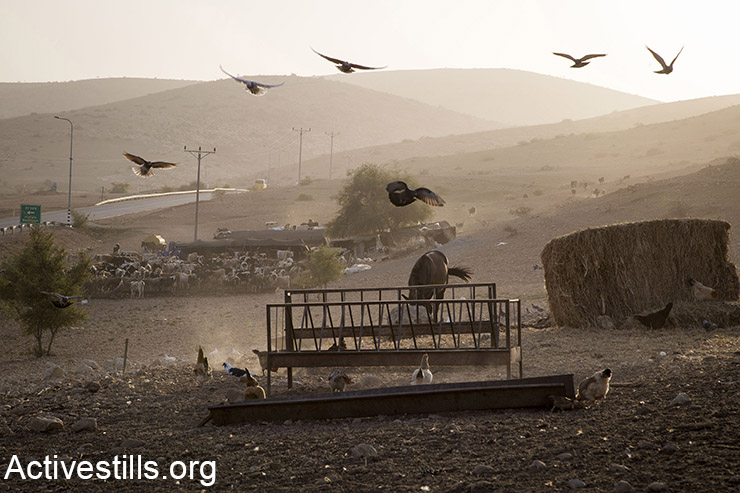 emailemailemail
Before you go…
A lot of work goes into creating articles like the one you just read. +972 Magazine is nonprofit journalism, owned by many of our writers, editors, and journalists. In order to safeguard that independent voice, we are proud to count you, our readers, as our most important supporters. With your support, we can keep +972 Magazine a strong, independent, and sustainable force helping push the global discourse on Israel/Palestine.
DONATE
More About home demolitions 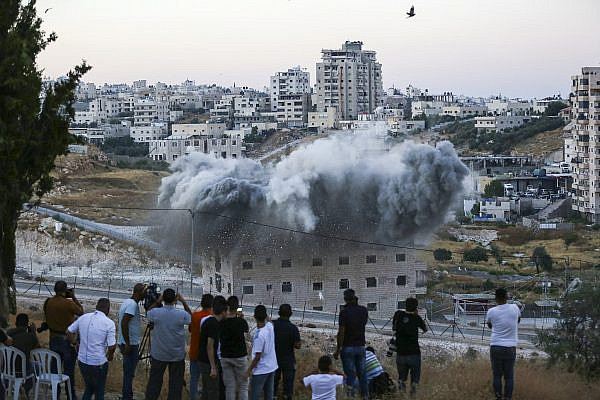 Over 9,000 Palestinians displaced in a decade of West Bank demolitions
Israel's demolition regime in the West Bank and East Jerusalem has destroyed over 6,000 Palestinian structures, displacing thousands of Palestinians over the past decade — over half of whom are children and minors.
By Natasha Roth-Rowland December 24, 2019