I have never met Miri Regev, but it feels like I have known her my entire life. I grew up, like her, in a place where we were constantly reminded that some people are worth less than others. 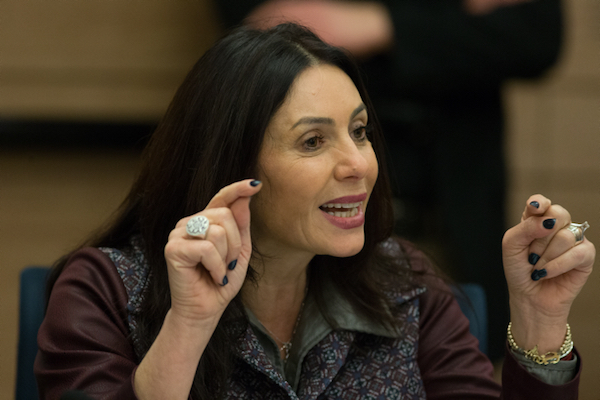 Israeli Minister of Culture Miri Regev in the Knesset on January 27, 2016. (Yonatan Sindel/Flash90)

I don’t know Culture Minister Miri Regev. I have never met her. But I have been surrounded by women and girls like her my entire life. And I think I know exactly what she thinks and how she feels.

Like myself, millions of others don’t know Miri Regev in the slightest, and yet just the mere mention of her name brings up strong feelings, for better or for worse. And this is because Miri Regev fits perfectly into the Israeli category that is not political by nature: if this is a script — and it is a script, lest you have any doubts — Miri Regev is the Moroccan girl from the periphery to whom rich, condescending, Ashkenazim do not take kindly. The girl who, as she stands before the show-offs of Tel Aviv, is told: go back to where you come from.

And among Ashkenazim and in Tel Aviv this girl and her gang will always walk around with a tense nervousness camouflaged as overconfidence or outright grumbling: but in their hearts they feel that they are not good enough, and they are only waiting for someone, anyone, to confirm those feelings — to show them the door. They will curse him, they may even threaten him with violence — because in their hearts they will feel cursed themselves. Or worse: that there is something “right” in the hostility toward them. That they truly are dirty and unworthy.

People identify with Miri Regev because there are many women and men in Israel who grew up with that exact feeling. Miri is their powerful symbol, the same way singer Ninet was a symbol for Israeli girls from the periphery in the beginning of the 2000s. Girls born to families without much money or education, who grew up in housing projects. Those girls and their families viewed Ninet’s success as their own.

Much bad blood has spread through Israeli culture and politics since the beginning of that decade. Forces of hatred and division from all sides of the spectrum gained power. The Mizrahi story, which previously was championed by the Mizrahi Democratic Rainbow — which the establishment always viewed as the radical left — was adopted with glee by the new iteration of the Likud party. Like a tribe on a reality show whose mission is to plant a flag in the middle of the opponent’s territory, these politicians gladly planted their flag: now this is their Israel. They know in their heart of hearts that the real forces running Likud and Bennett’s Jewish Home are as white as the snow caps of the Swiss Alps. And yet they remain silent.

I have known her my entire life. I was there beside her in my tiny kindergarten in the moshav where I grew up. I studied alongside her at my religious elementary school, and afterward at my middle school. I saw her come to school in a skirt only to change into shorts before she met up with her friends once the final bell rang.

I know what she felt about herself, because I could hear it and feel it: she was not good enough, not rich enough, not relaxed enough to be like the Ashkenazi children from the nearby towns, not to mention Tel Aviv.

Tel Aviv: the huge, painful reminder that some are worth less than others. The masters in their beautiful, clean clothes getting together to watch a show or laughing over beer — stylish and without a care in the world. While you see your laboring father or your housewife/secretary mother come home sweaty and dirty, hardly able to put bread on the table and raise you.

Where did they get the chutzpah? Are they prettier than I am? Did God create them to live above me? And the parallel question, which is no easier to ask: do I just make peace with the fact that I was born into a life of insignificance in their eyes? Maybe there is something about me that justifies it all.

I know Miri Regev like I know myself, my sister, my cousin’s children. I know the social fears, the worries of our social class, the feeling of being considered less in the eyes of Official Israel, obvious to us at every corner and every junction: the Israel of the news broadcasters who speak in high, official, clean accents, with clerks who do not look or sound like your mother or father, and judges and academics who have no idea who you are, where you came from, or what you have been through.

I know this, and I know exactly which heartstrings this history tugs at. I know this, just like nearly every Israeli who lives disconnected from the center knows it — just like every person who belongs to an inferior social class knows it, only this time it’s with a local, gendered twist. After all, Israel is whole only in the eyes of its politicians.

I do not hate what Miri Regev represents, and I do not hate the men and women who identify with her: hatred is an ugly thing that makes one stupid. I have a lot of love for the Israel I come from. I also have a lot of anger and remorse over the wrong, destructive direction that Miri Regev — and other Mizrahim in Likud — is taking the emotional intensity derived from those Israelis who see her as the embodiment of their experience.

If she could only get out of her own narcissistic story she would open her eyes and see that just like her, the theater in Ashdod is full of men and women who were raised with perpetual self-doubt, lack of confidence, and the fear of never being accepted, who never stopped asking whether they will be loved or even recognized for their talents. Boys and girls from every corner of the country, blacks and whites, Jews and Arabs, straight people, lesbians, and everything in the middle.

And I do not accept the fact that all their beauty and historical frustrations, the real and the imagined, the authentic and the calculated for the sake of political needs, is being channeled to promote the eternal rulers of corruption, idiocy, cruelty, and cold-heartedness: the Likud.