The following is an expanded version of my contribution to a group blog post by +972 writers, in response to Israel’s refusal to take in a group of Eritrean refugees who were left to bake in the desert sun for a week without food or medical help, while the army prevented activists from bringing food or a physician to examine them.

In 1977, Prime Minister Begin authorized citizenship for 66 Vietnamese refugees. The captain of an Israeli freighter in the South China Sea found them huddled on a leaky boat, low on food supplies, and took them in, bringing them to Israel after they were denied refuge in Taiwan. Begin granted the refugees citizenship in his first act as newly-elected prime minister. He was leader of the Likud party, which won Israel’s national elections after 29 years of uninterrupted rule by the rival Labor party.

At my Jewish day school in Canada, we were told by our teachers, who tended to represent the National Religious point of view, that Begin had done a mitzvah. The narrative we were taught was that the Jews, who had lost six million in the Holocaust because none of the countries that convened at the Evian Conference agreed to take them in, would behave differently now that they had their own state. 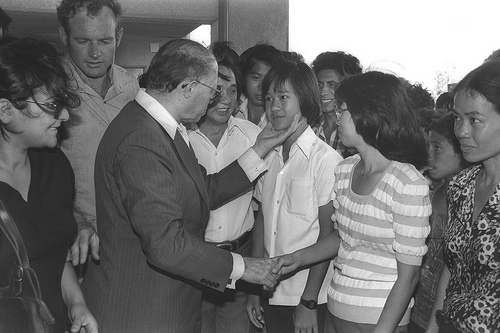 This is how Begin reportedly explained to President Carter his decision to take in the boat people:

“We never have forgotten the boat with 900 Jews [the St. Louis], having left Germany in the last weeks before the Second World War… traveling from harbor to harbor, from country to country, crying out for refuge. They were refused… Therefore it was natural… to give those people a haven in the land of Israel.”

Over the next two years, Israel took in approximately 300 Vietnamese refugees and gave them citizenship. Vaan Nguyen, the daughter of one of those refugees, was born, raised and educated in Israel. Today she is a published poet, journalist and actress who lives in Tel Aviv. A few years ago, she appeared in a documentary film about her family in Israel and her journey to visit her father’s village in Vietnam.

Today, websites that celebrate Jewish life and religion boast about Israel’s generosity to the Vietnamese refugees, which is compared to the many stories we were raised with – about Jewish refugees who committed suicide within site of the Swiss border after they were denied entry, for example. I grew up hearing and reading those stories about Jews who died because no-one would take them in. That photo, above, of Menachem Begin greeting the Vietnamese refugees in Israel? I found it on the Government Press Office’s official Flickr account.

Almost exactly 35 years after an Israeli ship rescued those Vietnamese boat people, Prime Minister Netanyahu, now leader of the same party once headed by the late Menachem Begin, allowed the world to watch as 21 Eritrean asylum seekers sat in the desert within Israeli territory, pressed against a fence that was built to keep them out. They were denied food or shelter beyond a couple of tarpaulins. They were denied medical care, even though one of the women in the group reportedly miscarried while sitting out there in the hot sun.

“It is important that everyone understand that Israel is not another destination for infiltrators,” [Netanyahu] said. “We are determined to stop the influx of infiltrations that has ensued.”

Today, the government announced that it was allowing three of the refugees – two women and a child – to enter Israel. The other 18 men were turned over to the Egyptians, who may repatriate them to Eritrea. According to Human Rights Watch’s reports, those men face indefinite forced army service, torture or jail in their native country. Or perhaps torture and death at the hand of Sinai smugglers who murder refugees in order to reportedly harvest and traffic their organs. In order to save those two women and a child, they basically sacrificed their lives.

According to an Associated Press report about Israel’s rescue of the Vietnamese boat people, Menachem Begin agreed to take them in and grant them citizenship after Japan, Taiwan and Hong Kong had refused to accept them.  He called their refusal “shameful.” Former prime minister Golda Meir added, “Would one not rescue a stray dog or a wounded bird?”

As far as I know, none of the major Jewish organizations have called the Israeli government to task for its deeply shameful and cruel treatment of a little band of Eritrean refugees.