The Hebron dairy is the primary source of income for an Islamic organization that runs two orphanages and nine schools. 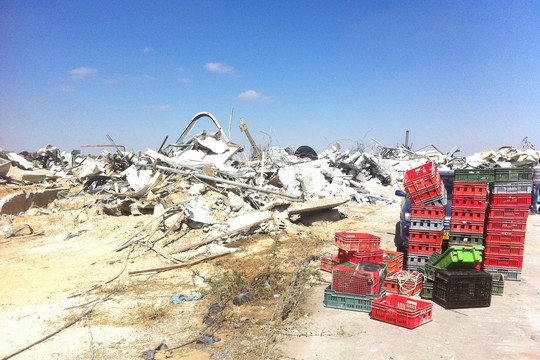 The remains of the Al-Rayyan yogurt factory after the Israeli army demolished it. (Photo by Youth Against Settlements)

Israeli army forces arrived to the outskirts of Hebron Tuesday morning and demolished the Al-Rayyan yogurt factory. The factory is owned by the Islamic Charitable Society (ICS) of Hebron and is the primary source of income for the organization, which runs two orphanages, nine schools and provides handicapped and impoverished populations with work and stipends. The organization directly aids 4,000 needy people in the Hebron area. Without the factory it will be have great difficulty continuing its charitable activities.

I visited the Al-Rayyan yogurt factory about two months ago, during Operation “Brother’s Keeper.” As I wrote at the time, ICS staff told me that during the operation soldiers raided their offices and seized computers and files containing information about all those who receive aid from the organization. Soldiers also came to the factory and delivered a demolition order. 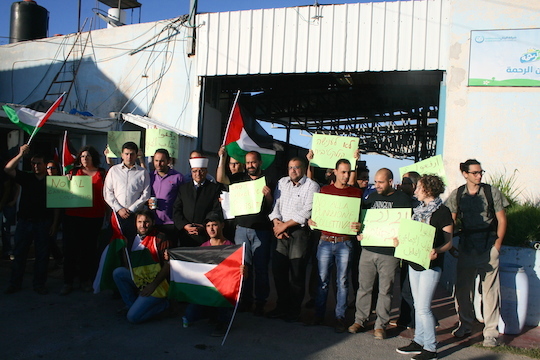 A solidarity visit to the Al-Rayyan yogurt factory two months before the demolition. (Photo by Haggai Matar)

The demolition order lists administrative reasons — a lack of building permits. However, in light of the fact that the factory has been operating for years without any interference, inside Hebron, and in light of the timing and claims made by the soldiers who raided the offices, ICS staff and management understood that the raid and demolition order came as revenge following the kidnapping (and murder, we would later discover) of three Israeli youths.

During the tour the organization’s staff told us that, indeed, it did once have some Hamas members. For the past five years, however, the Palestinian Authority has been operating the organization and it long ago switched out the management with its own people who oversee its activities to this day. The staff asked us to tell Israelis that they want peace and independence for both peoples, and they asked to spare the factory and the orphans who are dependent on it.

A request for comment about the — then pending — demolition sent to the army over two months ago remains unanswered.

It should be noted that ICS filed an appeal against the demolition two months ago but I have been unable to understand what came of it. I will update this post if I receive more details. 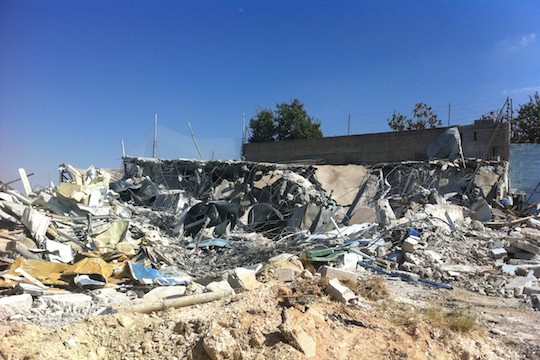 The remains of the Al-Rayyan yogurt factory after the Israeli army demolished it. (Photo by Youth Against Settlements)

Let’s assume, just for the sake of argument, that some of ICS’s members are affiliated with Hamas. If all that the organization does is support orphans, the handicapped and poor — whom nobody else is helping — then there can be no justification for shutting it down.

Hamas, let’s remember, is not exclusively comprised of suicide bombers and rocket squads. It is also the largest political party in the Palestinian territories today, which has a political echelon and charitable undertakings that truly only engage in charity. It has full array of civil society activities that are unrelated to any type of terror, and has various factions with varying political approaches. Of all places to target, there is no justification for shutting down an orphanage in Hebron.

All of that remains valid even if there is a valid administrative justification for the demolition, as stated on the military order. Without even getting into the policies of occupation that don’t even allow Palestinians the possibility of getting building or planning permits (while Israel usurps nearly 1,000 acres of land for a new settlement), is there no room to make an exception for a factory upon which thousands of needy people are financially dependent?

Now that the Israeli army bulldozers have left, activists from Hebron are asking whether Israel is ready to assume responsibility for the orphans.