Carrying 17 people, including university students, cancer patients, and protesters wounded by Israeli forces during the Great Return March, the Gaza boat was headed towards Cyprus before IDF gunboats intercepted it. 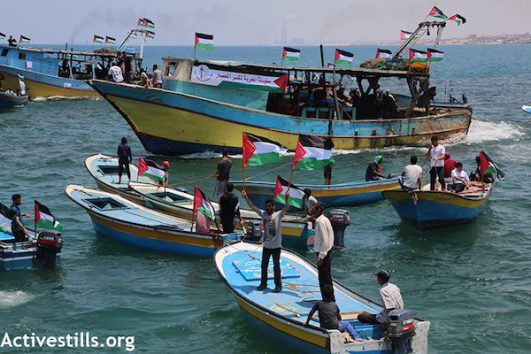 The Gaza “Freedom Boat” in port in Gaza, before attempting to break Israel’s naval blockade. May 29, 2018. (Mohammed Zaanoun/Activestills.org)

Israeli gunships intercepted a Palestinian boat attempting to break Israel’s naval siege of the Gaza Strip Tuesday afternoon. The attempt to break the blockade comes two weeks after Israeli soldiers killed at least 60 Palestinian protesters and wounded thousands of others at the Gaza-Israel separation barrier on Gaza’s eastern boundary.

The boat was headed to Limassol, Cyprus, and was part of a small flotilla comprised of three boats in total. The two other boats turned back and did not breach the naval blockade line enforced by the IDF. The IDF does not allow Palestinians to venture more than nine miles off the coast of the Gaza Strip.

The boat that the IDF intercepted was carrying 17 people. Those on board were mainly university students, but also included cancer patients and protesters wounded during the Return March seeking medical care outside of the besieged Gaza Strip, flotilla participants said.

“We are two university graduates, we lost hope of finding work in Gaza. Life in Gaza is impossible. We want a secure future. We are leaving for the sake of freedom,” flotilla participants Shadi al Nakleh, 28, and Ihab abu Armaneh, 29, told +972 correspondent Mohammed Zaanoun.

“We have no connection to any political party in Palestine,” the participants added. “We are sailing peacefully, without any weapons. Our message to the world is that we want peace — our journey is nonviolent.”

Asked about the risks their journey could entail, the participants responded, “We believe we will arrive in peace, but there are clear dangers: attack, arrest, the sinking the ship.”

“But the most important thing is that we will get their peacefully,” they stressed. “All other messages have failed.”

A woman bids farewell to a Gaza freedom boat participant. May 29, 2018. (Mohammed Zaanoun/Activestills.org)

After Israeli naval forces intercepted the boat, the IDF spokesperson announced that the boat would be towed to a naval base in Ashdod and the passengers returned to Gaza.

The interception of the Cyprus-bound boat comes just as another Freedom Flotilla, which departed the Norwegian port of Bergen on April 30, is on its way to Gaza. It is also nearly eight years to the day since Israeli commandos boarded the Mavi Marmara, part of the 2010 Gaza flotilla, and killed 10 Turkish activists.

Under the Oslo Accords, which created the system according to which the Israeli military rules Palestinians in Gaza and the West Bank, Israel agreed to allow Palestinian boats, and in particular fisherman, to operate freely in a zone extending 20 nautical miles off the Gaza coast.

The IDF also controls movement inside the Gaza Strip. Israeli troops maintain a no-go zone several hundred meters from the Gaza-Israel separation barrier — the site of the 45-day-long Gaza Return March protests during which Israeli forces killed over 100 Palestinian demonstrators and wounded tens of thousands with live ammunition.