Morrar was released without even appearing before a judge. Ahmed, his son, remains in prison pending an investigation into posts he wrote on Facebook. 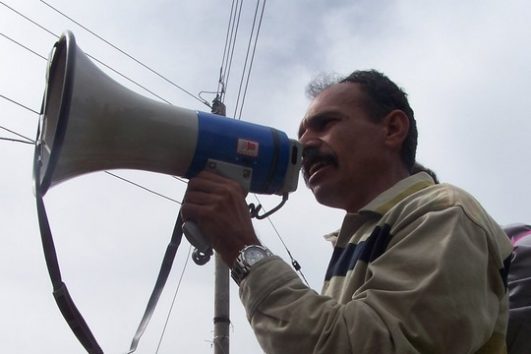 Ayed Morrar, one of the leaders popular struggle in the Palestinian village of Budrus. (Screenshot from the film ‘Budrus’).

Ayed Morrar, who led the Palestinian village of Budrus in a nonviolent struggle against the separation barrier, was released from prison on Wednesday after being arrested by Israeli security forces two days prior.

Ahmed, Morrar’s son, who was also arrested remains in prison. His detention was extended for another five days pending investigation into posts he wrote on Facebook. The police released Ayed without any court hearing.

“It is simply bizarre,” said attorney Gaby Lasky, who represents Ayed and Ahmed. “Before the hearing, I spoke with the police. With the support of the military prosecutor they agreed to release [Ayed]. This wasn’t even the court’s decision, there was no hearing at all, no one signed off on this. I cannot explain it.”

The police’s conduct appears even stranger considering its response to the court following attorney Lasky’s urgent demand to release Ayed and Ahmed.

“This is the first stage of investigation,” the police wrote in response to Lasky’s demand. “There are numerous activities that form the basis of the allegations against the detainees but it is not possible to describe them in detail in this response due to their confidentiality.”

The police response also criticized Lasky. “Needless to say, Attorney Lasky almost automatically submits requests to shorten the length of detention with the intention of frustrating investigators.” In other words, the police representative is criticizing Lasky simply for trying to do her job – freeing Palestinians arrested arbitrarily – while in the meantime releasing Ayed before his hearing.

“This is not the first time the police have arrested activists engaged in nonviolent resistance to the occupation in order to intimidate them,” Lasky said. “Perhaps this is how [the police] are trying to stop their activities.”

Morrar was a key figure in the nonviolent protests against the separation wall, which swept Budrus during the early 2000s, after the state announced that it would confiscate 300 acres of land in order to build the separation wall. Those protests would serve as inspiration for other popular protests across the West Bank, in villages such as Bil’in and Nabi Saleh, against the wall and settlements.

In the film “Budrus,” which tells the story of the village’s struggle, Morrar says he chose the popular struggle because it was the “avenue that best served Palestinian interests.”

Following the protests that began in late 2003, the village succeeded in returning a large portion of its land, which would have otherwise remained on the Israeli side of the wall.

A version of this post first appeared in Hebrew at Local Call. Read it here.