If the U.S. is willing to negotiate with the North Korean regime to advance its interests, then it should apply the same logic to Gaza and negotiate with Hamas. 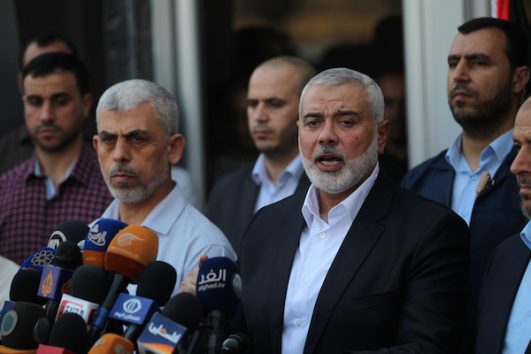 Hamas Chief Ismail Haniyeh speaks to the press upon his arrival at the Rafah border crossing, after reconciliation talks in Egypt with the Fatah movement mediated by Egyptian intelligence, in the southern Gaza Strip, September 19, 2017. (Abed Rahim Khatib/ Flash90)

North Korean Vice Chairman Kim Yong Chol met with President Donald Trump at the White House this week. As part of its efforts to denuclearize the Korean peninsula, the Trump administration is conducting negotiations with one of the world’s most brutal regimes. Human Rights Watch has described North Korea’s political prison camps as “the modern day equivalent of the Russian Gulag where prisoners are starved, beaten, tortured and worked to death.” North Korean guards club starving children to death for stealing rice, a UN report explained. Mothers have reportedly been required to observe the infanticide of their newborn babies as a form of punishment.

Despite these ongoing, egregious human rights violations, the White House is pursuing talks with Pyongyang to further U.S. interests. Washington’s engagement with Kim Jong Un makes its policy of refusing to speak with the Palestinian leadership in Gaza even more confounding. While Hamas has carried out horrific attacks, it would be hard to argue that the Islamist group’s actions, especially those in the past year, are more abhorrent than those of North Korea. If advancing U.S. interests is enough of a reason to negotiate with North Korea despite the government’s egregious human rights record, then the same logic must be considered with Hamas.

Hamas continues to control Gaza’s 1.8 million residents and is the effective sovereign power in the overcrowded enclave despite three wars with Israel. It’s safe to say that it isn’t going away anytime soon.

Trump and previous presidents have led round after round of negotiations between Israelis and Palestinians while only speaking with the Palestinian Authority. It remains unclear how it would be possible to achieve a peaceful solution while ignoring Gaza’s rulers, who can play a detrimental role in perpetuating the conflict. In times when the goals have been more modest, such as facilitating ceasefires after a round of violence, engaging with Hamas has always been a must.

For years, Washington has asked third countries, like Egypt, to assume the role of directly engaging with Hamas. However, if reducing Israeli-Palestinian violence is truly a U.S. national interest, as declared by multiple presidents, why wouldn’t the State Department want to have its own diplomats in the room?

Last month, White House Middle East Envoy Jason Greenblatt laid out conditions for Hamas to earn legitimacy. Hamas recognize the State of Israel, Greenblatt demanded. But, why should Hamas be held to a higher standard than Israeli ministers such as Naftali Bennett, who rejects Palestinian statehood under any framework? Despite his hardline views, the U.S. has not boycotted the Israeli education minister. 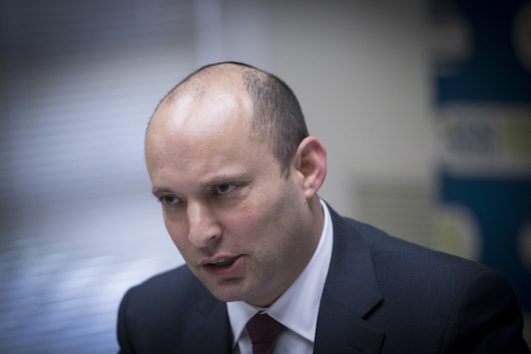 Jewish Home head Naftali Bennett leads a party faction meeting at the Knesset, December 12, 2016. Bennett rejects the Palestinian of a Palestinian state under any framework, yet the U.S. has not boycotted him. (Yonatan Sindel/Flash90)

The Trump administration’s second condition for Hamas is abiding by previous accords. This is an odd demand for the U.S. to insist upon given its own rejection of international agreements. The White House had no problem tearing apart the Iranian nuclear deal or Paris Climate accords, and Washington is still permitted to engage in international diplomacy.

Some may argue that as a U.S.-designated terror organization, Hamas is an irrational actor, and that there is no reason to engage in negotiations with the Islamist movement. Such analysis misreads Hamas’ actions.

During the recent weekly demonstrations from March 30 until May 14, Israeli forces killed at least 110 Gazans and wounded over 10,000 others. Yet, perhaps unexpectedly for those who view the group as a one-dimensional terror organization, Hamas abstained from launching a single rocket at Israel during this period despite its relatively vast arsenal. Hamas understood, possibly using Realpolitik calculations, that opening a wider battle with Israel would bring upon Gaza massive destruction similar to the 2014 war.

Hamas certainly hasn’t abandoned violence as a tactic. However, given how infrequently rockets have been fired at Israel over the past year, it is clear that Hamas can act with more nuance than some might believe.

Even Egypt, which has brutally repressed the Muslim Brotherhood, has adopted a more nuanced policy toward Hamas, despite the fact that Hamas was founded as an offshoot of the Egyptian Muslim Brotherhood. Cairo understands that ignoring Gaza’s leadership comes at its own peril, Egypt was a key player in negotiations with Hamas to establish a long-term ceasefire with Israel last month. Even Israeli security officials admit that Hamas is interested in a deal that will ease Gaza’s economic troubles in exchange for a long-term cease-fire, Haaretz reported on June 6.

If advancing U.S. interests is a strong enough reason to talk with North Korea, then it’s difficult to comprehend why the same rationale shouldn’t be used with key actors in the Israeli-Palestinian conflict. Given how much credit Trump has accumulated among Israelis, he could be one of the few U.S. leaders who could initiate such a dramatic policy change.