Im Tirzu’s so-called report on the funding of Israeli NGOs is – as usual – high on insinuation and hate-mongering, low on facts

Im Tirzu, Israel’s equivalent of the Tea Party – a sharply right wing movement masquerading as a centrist movement – published another stream of accusations against the left-wing organizations, this time using the old and tried method of guilt by association, hoping against hope no one will notice the glaring holes in their arguments. Luckily for them, they encountered rather lazy journalists; Unluckily, even former mouthpieces of the organization, such as Ben Caspit, began showing some skepticism (Hebrew). Caspit still parrots Im Tirzu’s line about required transparency on the part of the human rights orgs, but that’s only because he’s too lazy too find out the truth: all of the information he’s looking for is available online.

Let’s clean them Augean stables, then. You can find Im Tirzu’s report here (Hebrew PDF), and all notes refer to it. Its basic argument is this: Israeli human rights orgs receive money from two Palestinian funds, the WA (Welfare Association) and its daughter-organization, NDC. Some of WA’s contributers are shady characters – at least, in Im Tirzu’s eyes – and hence, human rights organizations are funded by terrorist organizations.

As it is, and as Haaretz reminded us today (Hebrew), Israel has no problem whatsoever outlawing organizations suspected of supporting terrorism: it outlawed dozens, if not hundreds, of “illegal associations” during the Second Intifada, and long before it. All this requires is the automatic signature of the Minister of Security on a GSS document.

The WA, aside from never being outlawed, is also supported (pg. 16) by UNESCO, the UN’s culture division; the World Bank; a long list of European organizations; and by (pg. 17) USAID. Which is to say, the US government’s international aid fund. It’s safe to say that if the WA was not outlawed by the Israeli government, and receives support of the World Bank and US government, it is not a terror organization.

Onwards. In order to smear the NDC, Im Tirzu’s mouthpiece – the daily Ma’ariv and its website, nrg – writes (Hebrew) that “officially, the fund is funded by the government of Switzerland, Sweden, the Netherlands and Denmark. However, the investigation of Im Tiruzu shows questionable evidence regarding that fund whose yearly budget is about 19 million dollars”.
Page 28 of the report shows that the NDC has indeed received 412,000 USD from the WA, which, given the NDC was created by the WA, a fact never denied, is not surprising; but, as usual, Im Tirzu are playing fast and loose with the facts. A quick check, which took less than three minutes, found that the picture in pg. 28 was taken from the NDC’s donor page. What Im Turzu failed to note was that the page listed several other donors. To the WA’s 412,000 USD, the World Bank gave 10;000,000 USD; The French Development Agency gave 6,000,000 Euro; and the pool of funding of Switzerland, Sweden, the Netherlands and Denmark, 6,000,000 USD more. If we roughly convert the 6,000,000 French Euros into 9,000,000 USD, then the World Bank and the European countries gave 25,000,000 USD in donations vs. the 412,000 USD of the WA – which is less than two percent of the total. It should be noted further that Im Tirzu – and Ma’ariv along with them – are simply shocked, shocked to hear that the NDC’s board is made wholly of Palestinians. Who could believe it – a Palestinian organization whose leadership is composed entirely of Palestinians!

So, what does Im Tirzu doesn’t like about the WA? The plot thickens. There is an organization called the Islamic Development Bank; in 2005 it donated 796,000 USD to the WA (pg. 17); the World Bank gave 10,477,609 USD and the USAID gave 656,805. So, what’s wrong with it? Well, among the organizations to which the IDB has donated we can find the Al Aqsa and Al Quds funds, dedicated (pg. 22) to “supporting the Palestinian people in the face of Israeli aggression”. Al Quds also (pg. 23) provides aid to the family of Shaheeds, and Al Aqsa supports the “preservation of the Arab and Islamic identity of Jerusalem”. 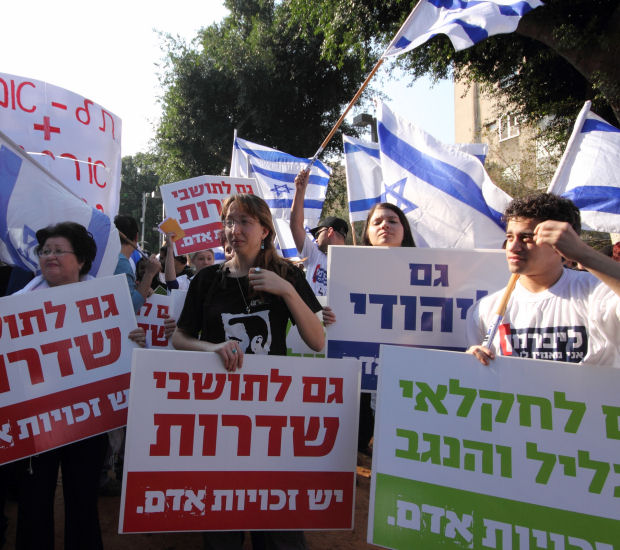 Several things must be said. First, Im Tirzu and its mouthpiece are pulling a bait and switch trick. They assume that the Israeli reader, upon hearing the word “Shaheed”, thinks immediately about a suicide bomber. But “Shaheed” merely means “martyr”, and it denotes every fallen in the struggle. Palestinians described their casualties as shaheeds during the First Intifada, when there were no suicide bombers, and almost all of the activity against the occupation forces was limited to stone-throwing. ‘Amr Al Qawasme, shot to death in his bed by IDF gunmen, is a shaheed. And yes, the families of these people require and are worthy of aid.

Second, Jerusalem is also an Arab and Muslim city. It was a an Arab and Muslim city for much, much longer than it was Jewish. Im Tirzu may not like it, may wish to erase this part of history – something which the Israeli government is busily doing – but these are the facts, this is reality, and it has nothing whatsoever to do with terrorism.

Third, and most critical, there is no connection – or, at the least, Im Tirzu failed to show any – between the Al Quds and Al Aqsa funds and the WA, not to mention the Israeli human rights organizations. The organization which donated to them , also donated to the WA. That’s all. The WA received almost 20 times as much money from the World Bank.

Im Tirzu then provides us with an example of the negative characters the NDC supports: Shau’an Ratheb ‘Abdallah Jabarin (pg. 14). Im Tirzu says he “is involved in terrorist activity”, specifically “being arrested several times on suspicion of involvement in terrorism, was administratively detained on charges of activity in the terror organization the Popular Front”; Im Tirzu also notes that since 2006, the security forces prevent Jabarin from leaving Israel and the territories. And then Im Tirzu comes to the “connection Israeli organizations” (inarticulateness in the original): Human rights organizations have appealed “on the side of Jabarin” and against his restriction order.

As the sharp-eyed among you may have noticed, there is one epitaph missing from the list: “convicted of…”. Jabarin was never convicted of anything. Not even by the IDF’s house-broken courts. Not even on the basis of “secret evidence”. That’s what Im Tirzu calls “providing legal aid to a terror activist”. Jabarin is not a terror activists, because he was never convicted of that; at the most he is a suspect. Which cannot be said, for instance, of Erez Tadmor, one of the duo leading Im Tirzu, and who was convicted of stealing explosives from the IDF.

In short, an organization led by a person convicted of security offenses (weaponry and explosives theft) pulled off another impressive misinformation trick – and some of the Israeli media swallowed it hook, line and sinker. Discovering that the majority of the NDC’s donations came from the World Bank and the EU took me less than three minutes; deconstructing Im Tirzu’s argument and pulling it back as this post took less than three hours. Apparently Amihai Ateli, Ma’ariv’s hack, and his colleagues prefer serving as stenographers, not journalists. In all likelihood, it brings more eyeballs.

Conversations with several activists in human rights orgs found them somewhat shell-shocked. They kept pointing out the fact that they disclose, in every document, precisely where they got their funds from, NDC included. They explained this is “colored money”, directed by the donating countries to specific purposes, and that the NDC merely serves as the pipe and as the comptroller making sure they spend it on exactly what they are supposed to. It doesn’t help: Lies, particularly in the digital age, circumnavigate the world while Truth is still looking for a free server.

I asked Yishai Menuchin, the CEO of the Public Committee Against Torture, if he wouldn’t prefer getting his money from the government of Israel. His reply made clear what was truly important: “I would prefer there would be no need of the Committee, that Israel would stop torturing”. Reaching that elevated state, however, would be very hard, as long as hate-mongers like Im Tirzu and their media collaborators continue to convince – some maliciously, some negligently – the Israeli public that those who oppose torture are funded by Al Qaeda.

Considering that the last three times I tried to get a response out of Im Tirzu, they told me they don’t want to speak to me, I didn’t bother trying this time.