‘What made Bab Al-Shams significant was the fact that it asserted that Palestinian activists would not simply react to injustices the occupation laid at our doorstep, but that we were determined to create our own realities on the ground.’ 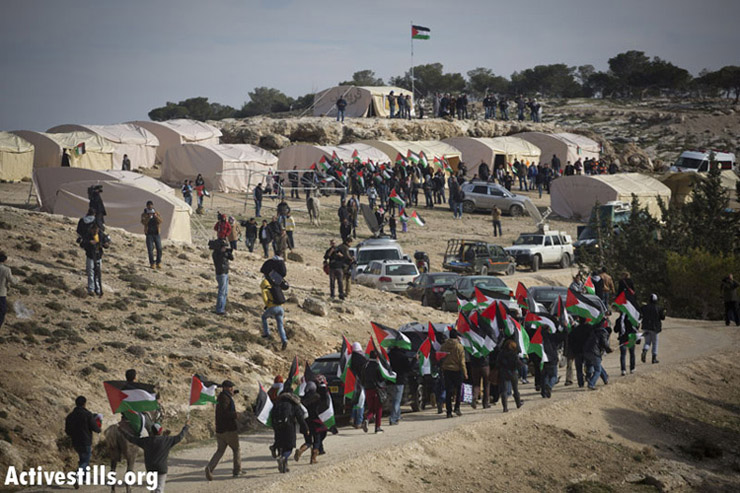 Last week, I witnessed a remarkable victory for Palestinian unarmed civil resistance. Over a frigid January weekend, I joined hundreds of Palestinians in establishing Bab Al-Shams (literally ‘Gate of the Sun’), a new Palestinian village, erected on private Palestinian land near Jerusalem in the territory known as E1, which Israel has controversially slated for future settlement growth.

The planning, coordination and discipline that went into this action were extraordinary. The exact plans were kept as a closely guarded secret until the last moment, when they were revealed to activists who gathered for a supposed planning camp in Jericho. Those who opted to participate boarded buses and began work on constructing the village. When we arrived at the site, tents were quickly erected, electricity connected, and a media center and clinic set up. On the owners’ behalf, lawyers obtained an injunction from Israel’s High Court barring our immediate evacuation. We held discussions and strategy sessions, as Bab Al-Shams provided the rare opportunity for Palestinian women and men from throughout Palestine to meet face to face. Before long, we were met by others who had run for miles through the hills, bypassing an Israeli cordon to join us.

Forty-eight hours later, in the middle of the night, after the Israeli Prime Minister’s Office argued before the court that we posed an extreme security threat, hundreds of Israeli Police special forces arrived to evict Bab Al-Shams – proving that acts of unarmed civil resistance are often the most disquieting to those bent on domination and intimidation.

Throughout our time in Bab Al-Shams, local and international media covered our story intensively, recognizing it for the act of creative, strategic nonviolence that it was, while numerous messages of support poured in through social media, phone calls and text messages. Seeing how Bab Al-Shams brought a new sense of optimism and hope to people around the world helped us endure the bitterly cold nights and violent evacuation by the Israeli forces.

But it was not just the level of organization and discipline that set Bab Al-Shams apart, nor the media interest that catapulted our story into headlines around the world. What made Bab Al-Shams significant was the fact that it asserted that we, as Palestinian activists, would not simply react to injustices the occupation laid at our doorstep, but that we were determined to create our own realities on the ground. With our own hands, we would lay the foundation for a society that is not rooted in strength of arms or coercion, but in partnership, equality and moral determination. Though Bab Al-Shams was evacuated and destroyed within days, it was a milestone in Palestinians’ efforts to take control of their own destiny.

Sadly, we did not have long to celebrate those achievements. Two days after Bab Al-Shams was evacuated, we received word from the West Bank village of Budrus, a bastion of the unarmed struggle against Israel’s Separation Barrier, that 16-year-old resident Samir Awad had been shot and killed by the Israeli army. He was hit from behind with three live bullets, though he was unarmed and by all accounts posed no threat to the soldiers. He was the fourth unarmed Palestinian to be shot and killed by the Israeli military in five days. In the blink of an eye, the triumphant protest songs filling the air in Bab Al-Shams were replaced by cries of anguish in Budrus, a community shattered by the loss of one of its sons.

Such extreme transitions are commonplace for those who live here. All too often, the promise of a fresh idea is swept away in a torrent of blood and tears. Yet even at the height of his community’s anguish, one of Budrus’s most resilient organizers, Ayed Morrar, told me that the village remains committed to using nonviolence to resist the occupation. Moved by messages of support and condolences that came in from around the world, Ayed asserted that the people of Budrus would not allow the violence visited upon their community to taint the way they raise their children.

Whether popular resistance ultimately succeeds in bringing about a better future in the region depends on our ability to follow the lead of remarkable communities like Budrus. It will be determined, in the end, by our capacity to emerge from the inevitable setbacks and tragedies we encounter with renewed commitment to steel ourselves and try something new.

But that future will come more quickly and with less blood spilled if those around the world, and particularly those in Palestinian and Israeli society who believe in the causes of human freedom and equal rights, pay attention to our actions. That partnership and moral sustenance from afar will help us remain steadfast in the wake of each horrendous death, each crippling injury, or each day spent in a dark and filthy cell. It will allow new forms of creative resistance to take root and flourish, rather than wither in the face of public indifference. And it will help make the sum of our actions something more than a succession of minor headlines about yet another series of “clashes” in an unspecified town in the West Bank.

The residents of Bab Al-Shams have been evacuated, its tents removed. Those of Bab Al-Karameh (‘Gate of Dignity’), a second protest village founded in its wake, are now gone too. What remains is our reinforced conviction, that despite everything, civil resistance can pierce through the hard layers of indifference and animosity that prevail here. That perhaps the occupation can end without a bloodbath after all. Like so many others who have trodden this path before us, we do not know if we will succeed, through efforts like Bab Al-Shams, in beginning the process that finally delivers freedom and dignity to all who live here. But we know we must try.

Irene Nasser is a Jerusalem-based activist and multimedia producer with Just Vision. 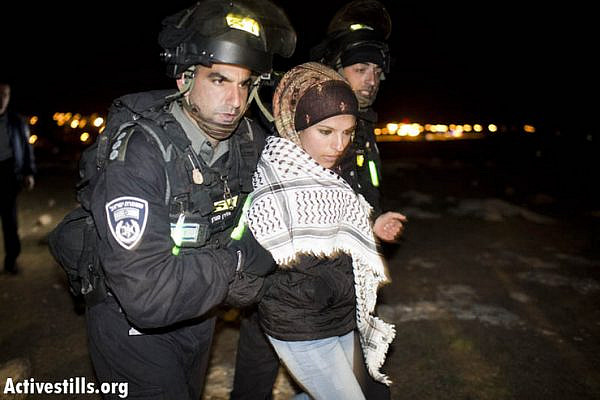 Palestinians greet Obama with popular resistance; army arrests dozens
After several days of small-scale demonstrations ahead of Obama’s visit, Palestinians organized two larger events Wednesday morning as the American president landed at Ben-Gurion Airport. About 500 people rebuilt 15 tents on privately owned lands in the new village-outpost of “Bab Al-Shams,” located at the heart of the much controversial E-1 area, where Israel intends…
By Haggai Matar March 20, 2013 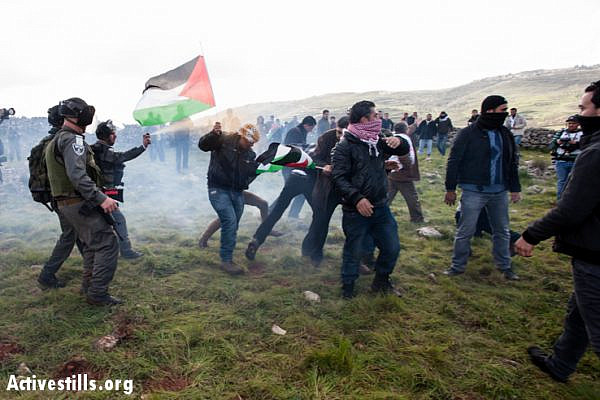