There is a shortage of 738 classrooms in East Jerusalem – only 38 percent of Palestinian children are registered in the municipal education system. The problem is not lack of funds, but a planning policy designed to prevent development in Palestinian neighborhoods of the city. 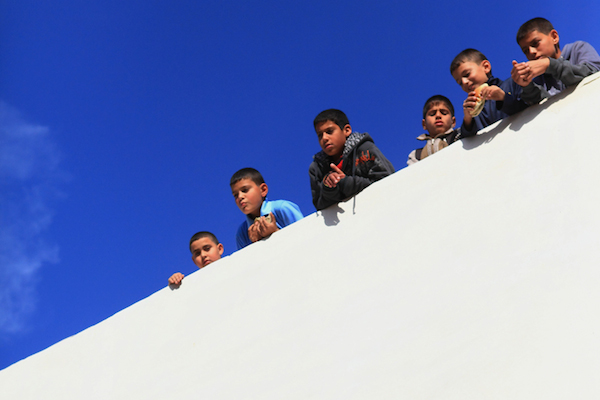 Palestinian children on a rooftop in East Jerusalem. (Anne Paq/Activestills.org)

Over the past five years the Jerusalem Municipality has built an average of 36 new classrooms per year in the Palestinian neighborhoods of the city. At this rate, how many years would it take for the municipality to remedy the shortage and fulfill its basic obligation to provide free education to every child in “undivided and unified” Jerusalem?

This is not advanced mathematics. Still the calculation is worthwhile. It would take 21 years to build the 738 missing classrooms, 40 years if we also want to replace those classrooms not up to code. In the meantime, tens of thousands of students are forced to pay exorbitant fees for a costly education. Thousands more simply stay home; the exact number of such students is unknown but according to the municipality’s statistics the figure is somewhere above 8,000.

Truth is, it was a trick question. In practice, the current pace of building barely covers the population’s natural growth rate. The bottom line is that only 38 percent of Palestinian students in Jerusalem (42,792 out of 111,5000) study in the official municipal system, as detailed in the latest Ir Amim report.

The report outlines the legal proceedings on this issue since 2000, demonstrating the ongoing failure of the Jerusalem Municipality and Education Ministry to fulfill their obligations based on court rulings as well as their own promises to resolve the issue.

For example, in 2011 the High Court ordered the Jerusalem Municipality and Education Ministry to absorb every single student in East Jerusalem interested in pursuing an education in the public system by 2016. The numbers show that come 2016, the shortage in classrooms will not be much different from what it was in 2011. The High Court also ruled that beginning in 2016, the Israeli authorities will have to begin paying tuition for all students compelled to study in the unofficial system as a result of missing classrooms. In the meantime, the financial burden continues to fall on parents. 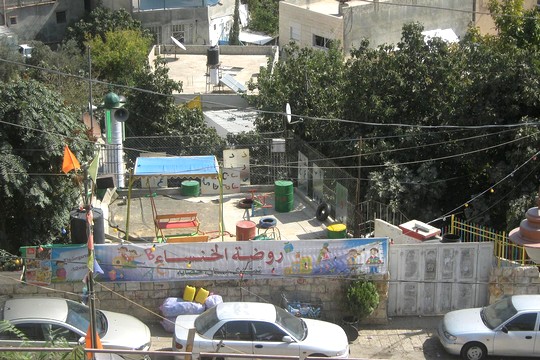 A kindergarten in the East Jerusalem neighborhood of Silwan. (Photo by Neal Ungerleider/CC 2.0)

The Parents Committee of East Jerusalem was established seven years ago in response to this very problem. The committee is elected by the parents themselves and brings together representatives from most of the Palestinian neighborhoods in the city. The Jerusalem Municipality could have seen this as an opportunity; a representative body of residents could be an important partner, even with its demands. All the more so if the Municipality would demonstrate goodwill, meet the residents’ justified demands and prove to the committee and the population it represents that there is benefit to dialogue. In reality, the Jerusalem Municipality treats the Parents Committee as an unwanted entity and prefers to work with other, more complacent education bodies.

This “mistake” is a representative example of the Jerusalem Municipality’s ongoing policy: it chooses to crush most civil campaigns in East Jerusalem by force and to break any networks or associations among residents. Other examples include the residents’ campaign in Beit Safafa against the construction of a highway through their neighborhood, and local campaigns in A-Tur and Issawiya against the expansion of a national park at the expense of their only hope for neighborhood expansion. By prioritizing the “Judaization of the city” over the basic civil needs of Jerusalem’s Palestinian residents, Israel continually weakens Palestinian leaders seeking to obtain their rights using non-violent measures.

Returning to the subject of education. Rather than demanding assistance from the government to eliminate the enormous disparities, Jerusalem Mayor Nir Barkat consistently chooses to publish inaccurate statistics while attacking civil society groups — including Ir Amim — which, could be important strategic partners on this issue. In response to past reports Ir Amim has published with the Association for Civil Rights in Israel, Barkat claimed that the disparities were diminishing, and that 400 classrooms had been built during his tenure. In reality, the municipality’s own statistics show that despite a modest increase in the building pace over the past few years, only 150 classrooms were built during the first five years of Barkat’s tenure. As stated, these classrooms barely cover the natural growth rate of the population.

Budgetary constraints are not the problem; the Education and Finance ministries consistently approve funding for schools in East Jerusalem – without delay. The primary obstacle is a planning policy that, for political and demographic reasons, prevents adequate development in Palestinian neighborhoods of the city.

Unlike the mayor, senior officials at MANHI (the Jerusalem Education Administration) recognize their own limitations. This year, at a hearing of the Knesset Education Committee, its chairman said:

We are having much difficulty building, because we do not have available land…other than 400 classrooms which are in the planning stages, in essence we are standing before a barren desert.

In another Committee hearing, his deputy remarked:

I feel that we encourage students to drop out; we force them to drop out because we do not provide classrooms. Every year, hundreds of students come to me wanting to enroll in the official system, and I tell them that there is no place. These students end up in the streets.

Even if we assume that Barkat does want to build more classrooms in East Jerusalem, when the choice is between classrooms for Palestinian students and construction of more settlements in Palestinian neighborhoods, it is clear where his priorities lie. Barkat has enthusiastically supported the construction of an IDF staff college in the A-Tur neighborhood, on land that was expropriated “for the public interest.”

Recently, he also allowed the approval of a new plan for a yeshiva (Jewish seminary) in Sheikh Jarrah on land which, according to the neighborhood’s master plan, was intended for “public structures for the welfare of neighborhood residents.” And this in neighborhoods with severe shortages of schools. In Sheikh Jarrah, for instance, there is not one official municipal kindergarten or elementary school.

All of this is to say that the Education Ministry alone cannot provide an equitable education to the Palestinian children of Jerusalem. The system is inextricably tied to a political policy, the goal of which is to entrench Israeli control over the city. According to this policy the Palestinian community of Jerusalem is a threat. The real questions we must face are not the ones posed at the beginning of this article. The real question is about citizenship, democracy and the true face of Israeli society.

Aviv Tatarsky is a field researcher at Ir Amim (“City of Nations”), which advances stability, equitability, and a negotiated political resolution in Jerusalem. This article was first published on +972’s Hebrew-language sister site, Local Call. Read it in Hebrew here.

Related:
Jerusalem by the numbers: Poverty, segregation and discrimination
‘Palestinians are losing their right to Jerusalem’
Israeli court says Palestinian doctors can work, as foreigners