He was denied entry to the U.S. for the premiere of his debut film, a short documentary about Palestine’s underground music scene. But director Sami Alalul seems unfazed. 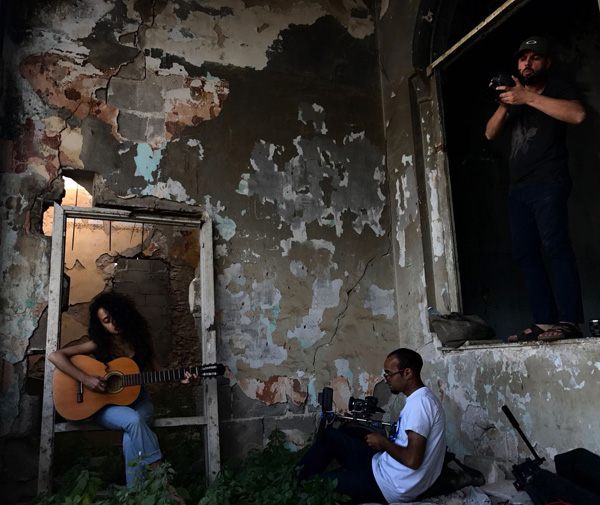 Filmmaker Sami Alalul (right) on set with Maysa Daw for his film From Beneath the Earth, which debuted at the DC Palestinian Film and Arts Festival on Sunday. (Photo courtesy of Sami Alalul)

Sami Alalul sounds out every syllable of his Queen’s English, ending most sentences with an almost timid lilt. It’s a manner of speaking that can seem deferential, but listen more closely, and it becomes clear that Alalul’s measured speech masks a more complicated truth. For like many with his “third-culture” upbringing, this 33-year-old filmmaker, born to a Palestinian father in the English coastal town of Poole, has spent a lifetime scripting his way, cautiously, between two worlds.

Sometimes, like when he moved to Ramallah to help tell the stories of Palestinian farmers, those worlds could seem to enrich each other, playing to Alalul’s linguistic strengths. Other times, what happened in one world was better left unsaid in the other. And on rare occasions, these worlds did something they weren’t supposed to do: they collided.

That’s what happened last Thursday, as Alalul was preparing to attend the Washington, DC premiere of his debut film, From Beneath the Earth. His UK passport at the ready, Alalul was informed by airline agents that U.S. authorities had denied him permission to board his flight. No explanation was given. And according to a post-9/11 protocol that requires citizens of so-called visa waiver countries to seek “travel authorization,” no explanation was required.

Alalul, who had traveled to the U.S. many times without incident, couldn’t explain it either. “I don’t know what to say,” he told me. “But I know this: I don’t want to be defined as the director who got denied entry to the United States.”

To grasp why, one need only watch Alalul’s 21-minute short, in which five Palestinian musicians narrate their own struggles, not just with the day-to-day drudgery of life under occupation, but with their heartfelt attempts to transcend it.

The film begins with a hat-tip to the unmistakable sound of Mahmoud Jrere, one third of the groundbreaking Palestinian trio DAM. In the opening scene, Jrere’s voice overlays images of urban splendor—landscaped roundabouts, glistening high-rises, gated homes—that quickly recede into a shot of graffitied concrete, the infamous Apartheid Wall separating Palestinians from those privileges. This, of course, is visual shorthand for Israel’s occupation of the West Bank, and we are fully expecting Alalul to introduce us to more of its victims.

But there are no victims in Alalul’s film. We first meet the West Bank hip-hop band Saaleek, named after a group of pre-Islamic Arabs who refused to be bound by tribal conventions. On camera, the most vocal member of the group is an anonymous young man who insists that, despite the political situation, the band refuses to use their Palestinian-ness “for sympathy or gain.”

That we don’t know the musician’s name is part of the director’s feint here. Alalul deliberately evades identifying his subjects until the final credits, the better to meet them as they are—largely unheralded. The affect is clear and convincing: we relate to them, not by name, but by their evident commitment to their music, which is both the vase and vessel of their humanity.

As beautiful as their music is, however, one senses a tension that never quite gets resolved. It’s another deliberate ambiguity that makes this unassuming film such a gem—and a reflection of its director’s own Palestinian story.

“At a certain point, you don’t want to keep talking about politics,” says Maysa Daw, who, of all the featured musicians, might be the most recognizable to outside viewers (beyond her own impressive work, Daw is now a member of DAM and collaborated with the group on the infectious feminist anthem #Who_You_R). Here, Daw isn’t only speaking about her identity as a Palestinian. She adds, for example, that she’s “still trying to find out where the line is between being a person making music and a woman making music.”

Throughout the film, what’s clear is that these “underground” artists are looking for their own ways to rise, as the title suggests, “from beneath the earth.”

Shadi Zaqtan, who coined the phrase and owns the popular Ramallah music venue La Grotta Café, acknowledges that that kind of self-actualization can’t come at the expense of his people’s struggle for freedom. But freedom, for him, is about more than just political liberation. “Our whole story, and our struggle, and our revolution,” he stresses, “[are] about being normal. I’d like to be an artist from Palestine, not a Palestinian artist.”

To be sure, much of Alalul’s soundtrack is infused with the kind of raw defiance pioneered by DAM and their pull-no-punches brand of political rap. But as with DAM, these artists aren’t afraid to ask difficult, sometimes open-ended questions.

For Rasha Nahas, the youngest of the featured artists, growing up in Haifa meant being part of “a roaring Palestinian underground scene,” according to her website. Trained as a classical guitarist, Nahas is as bold, even raucous, in her performances as she is understated in her on-camera commentary.

“There’s a certain truth that each artist wants to reach,” she says in the film, though she’s quick to add that “raw truth” may well be unattainable. 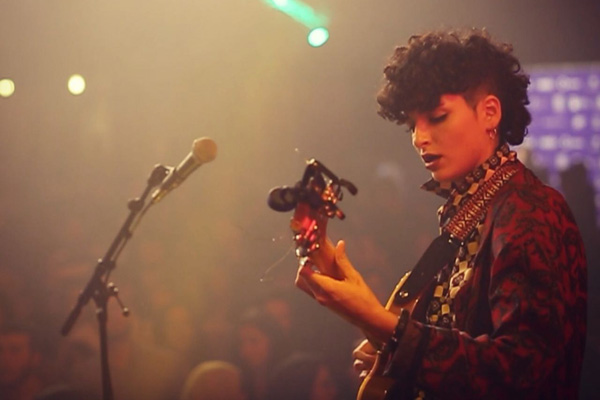 Although he sees music as a vehicle for that quest, Alalul acknowledges that some artists, himself included, can occasionally feel constrained by the politics surrounding them. “I sometimes feel like nationalism can be blinding,” he says.

It’s a sentiment shared by the frontman of Bethlehem-based Apo and the Apostles, who also appears in the film: “If you make the best music, and you say one political statement that does not subscribe to somebody’s agenda… they’ll scream bloody murder.”

I ask Alalul if he thinks his own politics played a part in upending his travel plans, but he seems unfazed. “Yes, it’s sad and unfortunate that I wasn’t allowed to go to the premiere of this short film,” he says. “But I’m OK with it. I get inspiration from the musicians I’ve spoken to.”

“The artists—they don’t allow fear to be their directive.”

“From Beneath the Earth” debuted Sunday at the DC Palestinian Film and Arts Festival and is slated for worldwide release in January. You can watch the trailer here.