A new documentary tells about the lives the Israeli community living in Iran during the 1960s and 1970s. But will the film be enough to challenge the dominant Israeli narrative regarding the root of animosity between the two countries? 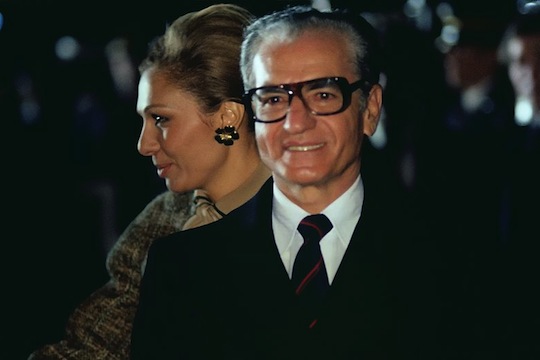 Mohammed Reza Pahlavi, Shah of Iran, and his wife, Queen Farah, prepare to depart after a visit to the United States. (photo: WIkicommons)

It seems that the mechanisms of remembrance and forgetfulness worked perfectly in shaping the collective memory of the relations between Israel and Iran. The Israeli narrative goes as such: during his reign, Mohammad Reza Pahlavi tried to create a modern, progressive, and western Iran (Iran’s relations with Israel were at the core and foundations of the shah’s geostrategic policies). The new documentary, Before the Revolution by Dan Shadur, beautifully conveys the story of the large Israeli community in Iran in the 1960s and 1970s, progressing in two simultaneous lanes: the lane of memory, and the lane of forgetting.

The vast spectrum of interviewees in this documentary allows the audience to gain a fuller picture of those relationships. The interviewees come from different walks of life: from senior diplomats to teachers in Tehran’s Israeli school or employees of the myriad Israeli companies that worked in Iran at that time. They tell us how and why the picture of this “special relationship” was drawn in such this way. They also describe the creation of the “oriental fantasy” in which they lived. Fancy luxurious department stores that offered goods that did not exist in Israel at that time (like Pampers diapers) welcomed the Israelis who held “unbelievable earning power.” Many of them describe the wealth, huge houses, live-in maids, and the large and thriving community.

Of course, this experience is not exclusive to Iran – many Israelis who spent years in other questionable countries allied with Israel, such as South Africa or countries in Latin America, returned with similar experiences. Yehuda Artzieli, an Israeli businessman who lived in Tehran during the 1970s, describes a dinner held at the palace to which he was invited by the shah’s brother. According to Artzieli, the dinner looked as if it were taken from a chapter Arabian Nights: four servants dressed in white with a golden belt opened the door for him, four other servants pulled out his chair for him. During dinner, the shah told Artzieli: “Here, in this room, there is no Islam. Drink as much as you want, feel free, do whatever you want.” A real oriental fantasy, no?

Using 8 mm films taken by his parents and their friends, Shadur tells the story of these magnificent two decades. Ofer Nimrodi, who was born in Iran while his father served as the military attaché in Tehran, is interviewed about the grandiose projects Israel operated in Iran. “We built their dams, we taught them agriculture,” says Nimrodi, and most importantly: “we built their country” (and these ungrateful people threw us out?). In another part of the interview, Ofer Nimrodi brags about the golden Uzi that his father received from the Israeli Military Industries for being the first to sell 50 thousand pieces of the Israeli-made rifle. This is one example of the blurring of the collective memory of the Israeli community in Iran, and the mutual recognition over the things that everyone knew but agreed not to discuss. The Israelis knew well about the dictatorial nature of the shah’s regime. They witnessed the immense gaps between the elites and the rest of the people, which they describe in the film.

Tehran gains a new dimension when Nissim Levi, a security officer in the Israeli embassy, talks about the road that divided the city between its “12th century area” and the wealthy area which was “definitely part of the 20th century.” The deep confusion between “Westernization,” or “progress,” and “democracy” recurs throughout the film. Ori Bartal wonders whether a “benevolent tyrant” would not be better for the Iranians than democracy. Nathan Frakiel, the Solel Boneh representative in Tehran, admits that he recognized the harsh conditions under the shah’s tyranny, but adds that “it’s not our bloody business.” This approach reflects well the Israeli policy from its early days: Israel sold weapons wherever there was demand and, in the Iranian case, gained a strategic ally in return. However, in Iran’s case, the government was on the wrong side of history. The same happened in apartheid South Africa as well as other African countries.

Professor David Menashri helps contextualize the scenes and interviews throughout Shadur’s film. Israel took an active role in establishing and training SAVAK, the shah’s notorious secret service. Everyone knew of the Israeli involvement, but this is often forgotten when Israelis analyze the roots of the Iranian animosity to their country. SAVAK gained a reputation of being the cruelest among the world’s secret services, and Menashri, who studied in Tehran University from 1977-8, explains that every conversation with a colleague or professor was taken outside where no one could listen, as the SAVAK had many collaborators among the students (at its peak every third student in Tehran University was on the SAVAK payroll).Further, Menashri notes, there were no copy machines on campus so that students could not copy censored materials. More importantly, he explains that contrary to popular belief, the revolution was not a romantic yearning for Islam but rather a demand for social justice. Menashri connects Iran’s 1979 revolution with the events of the Arab Spring and Tahrir Square. In one piece of archival footage, the viewer even sees the protestors call: “Esteqlal, Azadi, Qanun-i assasi (independence, freedom, constitution).

One cannot overemphasize the contribution of this film to better understanding the relations between Iran and Israel. The tapestry made from archival materials, the home films, the interviews, and the personal connection of the director to the story gives the documentary the flow of a good story, despite the well-known end. Furthermore, the film contributes to the understanding of the root of animosity between the two countries, which is based in the elite status the Israeli envoys enjoyed compared to the general population of Iran. Shedding light on this grey area in the Israeli collective memory is imperative for the process of understanding history. Reliving this stretch of history is embarrassing for Israelis – perhaps that is why it is so comforting to think about an Israel that “built their country.”

Lior Sternfeld is a PhD Candidate in the History Department in the University of Texas at Austin. His research focuses on Iranian social history and the religious minorities in Iran during the Pahlavi era. This post was first published on Haokets.

Related:
Zionism and the Shah: On the Iranian elite’s evolving perceptions of Israel