‘Our work has always been about the communities we live in and interact with. We believe that good journalism is about changing the world for the better, and we want that change to begin at home.’ 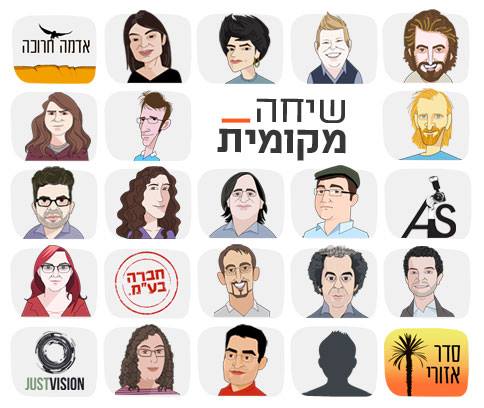 “How many people in Israel read your magazine?”

We stopped counting the number of times we’ve heard this question in the four years since +972 Magazine was established. The long answer is that while 20 percent of our traffic comes from Israel/Palestine; and while most members of our team were writing in Hebrew and interacting with other Hebrew-language writers all the time, they were doing it on other platforms. Some of the material featured on +972 Magazine – like essays on the Haokets or the Café Gibraltar channels, or reports from Social TV – was already translated from Hebrew. +972 is about connecting the local conversation to the world, so it has always had a local presence, even when we wished our site had more local readers.

The short answer to the above question is, “not enough.”

Our bloggers have discussed launching a Hebrew platform many times over the years. Our work was always about the communities we live in and interact with, so it made a lot of sense. We believe that good journalism is about changing the world for the better, and we want this change to begin in our own home.

Yet time and again, plans for a Hebrew platform were shelved due to a lack of resources. +972 Magazine depends on the work of volunteers, on grants and donations. We feared that doubling the size of our project could have put at risk that which we had already built.

Just as we were nearing a decision to test the waters anyway, there came Just Vision – an organization, with teams in New York, Washington DC and Jerusalem, that creates documentary films and multimedia focused on the struggle of grassroots leaders for freedom, equality and human security. Just Vision suggested partnering with us on the new project, as did Activestills – the photography collective that has been featuring their work on +972 since the site was launched.

And that is how Local Call, +972’s Hebrew-language sister site, was born. (Local Call is a translation of “Sikha Mekomit,” which means both “local discussion” and “local call.”)

Local Call is not a mirror site of +972. Some of our bloggers publish on both sites, but there are many great new writers and a lot of their work will also be featured on the English site. Local call is run by a very diverse group – including Jews and Palestinians, Ashkenazi and Sephardi writers, LGBT, religious-Orthodox, and secular immigrants from the former Soviet Union. What they all share in common are the basic principles of this project: a commitment to ending the occupation, support for human rights, and a strong belief in free, uncensored and honest journalism.

In times of political censorship and increasing difficulty in accessing decision-makers and official information, we seek to expand the conversation and freely discuss what the mainstream media prefers not to touch. While the Israeli political discourse is drifting to the right, we seek to have a strong, unapologetic, human rights-centric message. Whereas newspapers are becoming more cautious — afraid of upsetting subscribers, advertisers and politicians — we want to challenge them all. In short, we believe that the most important journalistic work should take place outside of society’s comfort zone.

In the short month since Local Call was launched, it has been visited by over 40,000 Israelis. The site was the first Hebrew media outlet to feature the videos documenting the killing of two Palestinian teens in Beitunia, and the only outlet to cover the hunger strike by dozens of Palestinian prisoners. These are but a couple examples of the unique voice Local Call seeks to bring into the Hebrew discourse.

If you read Hebrew, we invite you to check out the new site. (Scrap that. We invite you to bookmark it, join our Facebook page, follow us on Twitter and sign up for our newsletter.) If you don’t read Hebrew, we are certain that you will enjoy the many Local Call pieces that will be translated and featured on +972 Magazine (here are but a few great examples so far).

As always, we invite you to share our work with your friends and followers, and to donate to both projects. It’s your support keeps this project going.