Major Peter Lerner, spokesman for the IDF’s Central Command, appears to endorse proposed legislative bills that would, if approved by the Knesset, severely limit funding for Israeli human rights NGOs.

The proposed bills, which received approval from the Knesset Legislative Committee on Monday but have not yet passed a first reading in the Knesset, are, as my colleague Noam Sheizaf explains, highly controversial; in effect, they would amount to a severe limitation on freedom of speech, particularly since the targeted NGOs are critical of the army and the government’s policies. The bills were condemned by Kadima leader Tzipi Livni, head of the opposition, who called them “draconian and anti-Zionist,”  and by Labour leader Shelly Yachimovich. Hadash MK Dov Khenin accused the government of leading an “assault on [Israeli] democracy” (HEB link). The New York Times reports that Prime Minister Netanyahu supports limiting foreign funding for NGOs, but would like to narrow the wording of the bill; meanwhile, three prominent members of Netanyahu’s own Likud party opposed the bills in the ministerial committee vote.

Despite the controversy, IDF spokesman Peter Lerner tweeted two statements in which he appears to endorse this controversial proposed legislation.

In the first, he retweets another blogger’s link to an article headlined “Israel strikes a blow to foreign influence of its policies.” 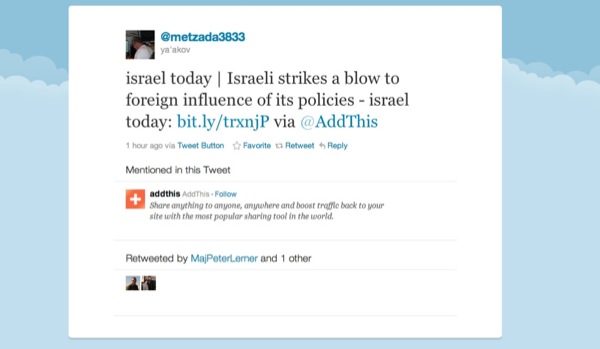 The piece is published in Israel Today, a magazine founded by German Messianic Jews (also known as Jews for Jesus) who “believe that the existence of the State of Israel is a fulfillment of prophecy and a plumb line for the purposes of God for these times.”

In the second tweet, Major Lerner implies that Israeli human rights NGOs are engaged in subterfuge by failing to reveal the sources of their funding. 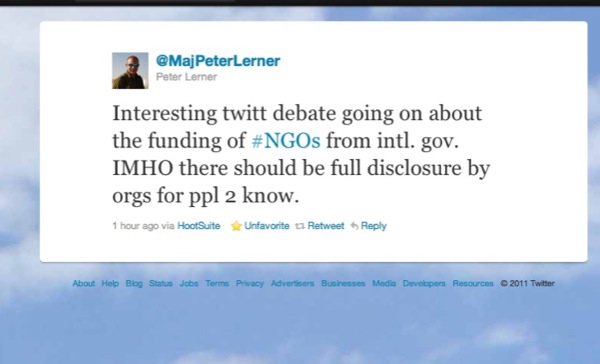 In fact, Israeli human rights NGOs routinely list all their sources of funding on their websites. By implying otherwise, Lerner is repeating a far-right canard – ie, that human rights NGOs are pawns of foreign influence and not really “Israeli.”

Since Major Lerner is tweeting in his official capacity as a spokesperson for the Israel Defense Forces, his statements would seem to reflect army policy. If that is the case, then the IDF, which receives at least $3 billion (USD) in foreign aid per annum, is proposing that human rights NGOs like B’tselem and the Association for Civil Rights in Israel be deprived of a few hundred thousand or couple million dollars in grant money for its operating costs. More seriously, he is violating IDF policy by expressing a political opinion in his capacity as a serving officer. Graver still is this: The proposed legislation has not even passed the first of three hearings in the Knesset yet; it is not law, but rather a political opinion. And yet, a serving IDF officer is openly supporting a partisan political position.