A certain air of nostalgia dominated Maariv’s headline last Thursday: “Due to criticism in the world, IDF parts ways with white phosphorus”: just like the old Galil assault rifle and the old two-way radios that generations of soldiers grew familiar with. A couple of years ago we learned the IDF was giving up its cans of preserved meat (the kosher version of SPAM). Now, it’s white phosphorus that we say goodbye to.

[Twilight. The IDF and white phosphorus exchange a final gaze. A sad violin tune is heard. Curtain down.]

So the IDF is looking for a replacement for the white phosphorus bombs. A senior officer in the ground forces explained: “As we learned during Cast Lead, it [white phosphorus] doesn’t photograph well, so we are reducing the supply and we will not purchase beyond what we already have.”

“It doesn’t photograph well.” In all honesty, the man is right.

This item caught me by surprise. The IDF is giving up white phosphorus? Wait a minute; the IDF never used white phosphorus during Cast Lead. So how exactly do you give up something you never had? Chemical weapons are something the Syrians use, no?

Okay, after a while the army did remember that it had been confused, and it did use white phosphorus, but only in open territories and not against people.

Okay, then the IDF remembered that it got it wrong again and that it did use white phosphorus in urban areas. Two hundred bombs, actually. But this was only in order to create a “smoke screen,” and there is nothing wrong with that. And if there was something wrong, it’s insignificant and unintentional, and it would be thoroughly investigated, so that no stone is left unturned.

That’s all well and good, except that at least 12 Gazans met their horrific death this way, burned to death by white phosphorus. Among them were three women, six children and a 15-month-old baby girl. Dozens more suffered burns from the material which continues to burn through flesh and tissue until it reaches the bone. Doctors in Gaza were helpless in treating the unfamiliar burns. Israel didn’t give them time to prepare themselves; white phosphorus shells hit Al-Quds Hospital and completely burned the top two floors.

These facts were already known in the first days of Cast Lead. Human Rights Watch published a thorough investigation – one of the most thorough I have read – of Israel’s use of white phosphorus and its devastating effects. IDF soldiers who took part in the Gaza campaign also testified on the extensive use of white phosphorus, including direct fire on houses suspected of being booby-trapped (and not for “masking” purposes as the IDF later claimed). 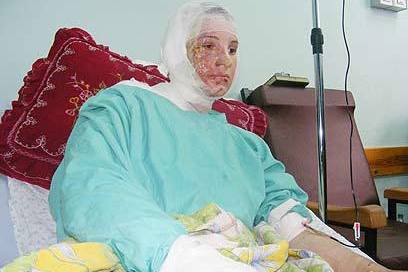 Indeed, the outcome “didn’t photograph well,” and that’s the reason the IDF is parting ways with white phosphorous. Not, god forbid, the hell that Ghada Abu Halima went through from the moment she was burned by white phosphorous and lost five family members, up until her death two and a half agonizing months later. Ghada managed to give her testimony and to have her photo taken, which “didn’t look good,” and “burdened Israeli hasbara [propaganda],” as the Maariv reporter put it.

The lessons of Cast Lead – and more accurately, the lessons of the Goldstone committee – were already partly implemented during Operation Pillar of Cloud. The smoke that rose over Gaza five months ago wasn’t white phosphorus, but the goal was the same. Masking. So nothing is seen or photographed. It worked well with the Israeli media, which anyway doesn’t take much interest in Gaza, in war and in peace, so there is no danger that things “look bad.” It didn’t work as well with the foreign reporters, despite and perhaps because of the message the IDF sent them when its bombs knowingly targeted a press building in Gaza. Thus the gap continues to grow between Israeli self-perception and its image in the world.

Right now, someone is sitting at a drawing desk in Rafael or Elbit (Israeli arms manufacturers), trying to figure out how to invent the next magic weapon – the one that removes the idea of freedom from Gazans’ minds and at the same time, “photographs well.” The development plan has already been approved, the budget is on its way and the pilot is only a matter of time. In the weapons lab called Gaza, testing is part of the battle. Yet this weapon will fail too — as will the one that comes after it. As long as we have eyes, nothing that Israel does in Gaza will “photograph well.” You hear that over at Rafael? Maybe you should simply cut to the heart of the problem? Right-wing groups like Im Tirzu already get it: deal with those who can see.

Idan Landau is an Israeli academic at Ben-Gurion University. This post was originally published in Hebrew on Idan’s blog, “Don’t Die a Fool.“‘ it is reposted here with the author’s permission.

Get Our Weekly Newsletter
Before you go…
A lot of work goes into creating articles like the one you just read. +972 Magazine is nonprofit journalism, owned by many of our writers, editors, and journalists. In order to safeguard that independent voice, we are proud to count you, our readers, as our most important supporters. With your support, we can keep +972 Magazine a strong, independent, and sustainable force helping push the global discourse on Israel/Palestine.
DONATE
More About Pillar of Cloud WATCH: Soldier uses live ammunition on unarmed protesters, injuring teen
This footage was taken by B’Tselem during a protest against Israel’s Pillar of Defense operation against Gaza (November 19, 2012). The protesters – Palestinian high-school boys from Tuqu’, in the West Bank – are seen chanting and occasionally throwing stones at soldiers near Route 356. Neither the soldiers nor any passing car seemed to have been under threat. At 1:53,…
By Noam Sheizaf January 7, 2013