With very few exceptions, the protesters who toppled Hosni Mubarak did not even mention Israel during their 18-day revolution.  Even now, with post-revolutionary populism slightly on the rise, there is no-one, from anywhere on the political spectrum, who wants to abrogate the peace agreement. At the worst, Israel can expect the cold peace to become slightly chillier

There was a “Down with Mubarak!” sign in Hebrew or two. With grammar mistakes, too. The implicit – and sometimes not so implicit – joke was that Mubarak was an Israeli agent and couldn’t read the signs ordering him to leave in Arabic. 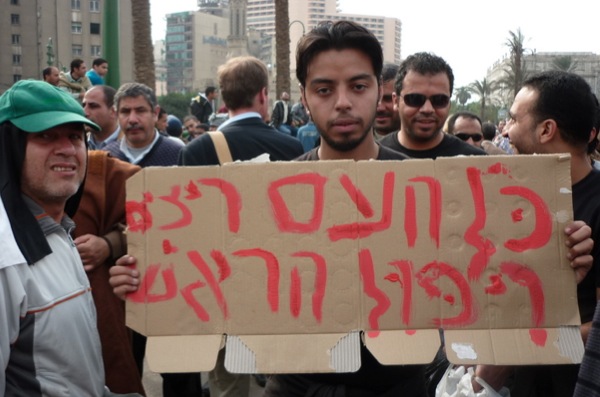 In Tahrir, a sign that says in broken Hebrew, 'the entire nation wants the president to fall.' (photo: Mohamed El Dahshan)

And on January 25, the very first day of protests when demands were still unclear, there was a single banner deploring the export of Egyptian natural gas to Israel via a multinational consortium – the main criticism of that agreement being that the deal was signed in 2005 and fixes export prices at a fraction of today’s market prices. I don’t recall having seen any other such sign since.

But this aside, Israel was almost nonexistent throughout the eighteen days of the revolution, whether out on the square on in pundits’ discussions in Egypt.

In Israel, understandably, as well as in the US – where the government has struggled to speak a lot on the subject to say nothing – concerns ran high on the future of Egyptian-Israeli peace. But I can assure you, in Tahrir Square, that was the furthest thing from our minds.

The revolution was leaderless – and as such, there was no room for cheap populism or hateful speech to extract an extra cheer or two from the crowd. The people in Tahrir Square, in Suez, in Alexandria, and across the country were out there for more imminent reasons: Police brutality; corruption; poverty; and inflation. The absence of decent health care and education. “Bread, freedom, human dignity!” went one of the core chants that lived throughout the eighteen days of protests. The grievances were deeply personal, not ideological.

The demands escalated as attacks from the government police and thugs were fended off one after the other. But they were never about foreign policy. They were about justice, human, social and economic rights. The chants were sincerely unitarian; the message unequivocally positive. People demanded what was theirs – and with that, they demanded the cause of their grief to be removed.

It’s only in the post-revolutionary phase that Israel is becoming a part of the public discourse; a little populism is to be expected in these times of political uncertainty and regaining popular interest of the public matters, as we’ve already begun to see.

Liberal opposition leader Ayman Nour’s declarations on February 14 to a Lebanese television network are a case in point. His statement that “the Camp David accord is, in effect, over” needs to be viewed in this context. Not only is Nour out fishing for popular support, after his and his party’s have plummeted in the past years, but this statement was immediately preceded by “we believe that we should uphold our international engagements.”  He also said that “Camp David needs to be developed in a proper fashion – there are elements in it that are unfair to the Egyptian side.” For many, including myself, the limitations the agreement puts on Egypt’s deployment of its armed forces on its own soil are indeed unfair and could benefit from a review. But this remains very far from an intention to terminate the peace agreement or to resume hostilities with Israel. There is no-one, across the political spectrum, who wants that.

Netanyahu’s worries, and his feeble show of support for Mubarak, were misplaced because they were unnecessary.  In fact, they were assuredly counterproductive: a vote of confidence from the Israeli government does not help score popularity points with the Egyptian public.

As protesters in Tahrir gathered on Friday the 18 for the weekly prayer, they were led by Sheikh Youssef El Qaradawi, a conservative imam with ties to the Muslim Brotherhood who has, for decades, been a vocal opponent of the Mubarak regime and was consequently banned from Egypt. He is now serving as president of the World Union of Islamic scholars in Qatar, and he has taken Qatari citizenship. His speech focused on corruption, reform, the role of the army and the need for a new government. Only a few sentences around the end of his 30-minute sermon were dedicated to foreign issues – namely, Palestine. “Open the Rafah border crossing that separates us from our brothers in Gaza,” he said, addressing the army. “Egypt, that has fought four wars for Palestine, must be its shield.”

After the prayer the crowd joined briefly in a chant of “to Jerusalem we go, even if we are martyred by the millions” – which many outside observers have erroneously construed as a regain of belligerence towards Israel. What it was, however, was a decibel level fight – between the Islamist and the secular movements. What the brief YouTube clip of those chants did not show, however, is that for every person clamoring an ‘Allah Akbar,’ two would raise their voice in a ‘Viva Egypt’ or ‘Be proud for you are Egyptian.’ The ‘Palestine’ and ‘Jerusalem’ elements of those chants were just accessories. Besides, those chants have always been a part of pro-Palestinian demonstrations – and no one has yet started walking toward Jerusalem. The rest of the day was celebratory and mournful for the lives we lost. It was not about Palestine, and the Qaradawi speech was also heavily criticized in the following days for attempting to shift the debate on foreign issues, if only for a minute.

Realistically speaking then, a change in Egypt’s Palestinian policy is to be expected. The previous government’s collusion with Israel on issues such as the blockade of Gaza is likely to end in favor of a relaxation of the Rafah border control conditions. With the foreseen participation of the Muslim Brotherhood in the next elected parliament, Egypt will also be less likely to tow Israel’s line on the rejection of Hamas’s participation in the Palestinian decision making process.

The chumminess between Egyptian and Israeli leaders is likely to cool down. Expect fewer Israeli official visits to Sharm El Sheikh and Cairo, less public jokes with Netanyahu or hugs with Livni. The cold peace may get a notch colder, but no more. After all, the army has declared it will honor Egypt’s international agreements – a clear reference to the Egyptian-Israeli peace treaty. With the politically influential armed forces as guarantor of the treaty, any public policy changes vis-à-vis Israel will likely be more cosmetic than real.

Israel can contribute to shaping the aftermath of the revolution and determine how this crisis affects it.  It can either keep holding on to its wish that Egypt will remain a client state to the United States, and continue to uphold its peace agreement by sheer force of political pressure and international aid. Or it can attempt to reach out and, particularly by force of goodwill measures vis-à-vis Palestine and Syria, prove that it seeks to establish genuine peace and wishes to be a peaceful neighbour in the Middle East. If it does, it will discover, as the rest of the world has done over the past weeks, that Egyptian public opinion comes with a high degree of awareness.

Mohamed El Dahshan is an Egyptian economist and journalist whose articles have been published in the New Yorker, the Guardian, the New York Times and Al Masry Al Youm, amongst other publications. He lives in Cairo.