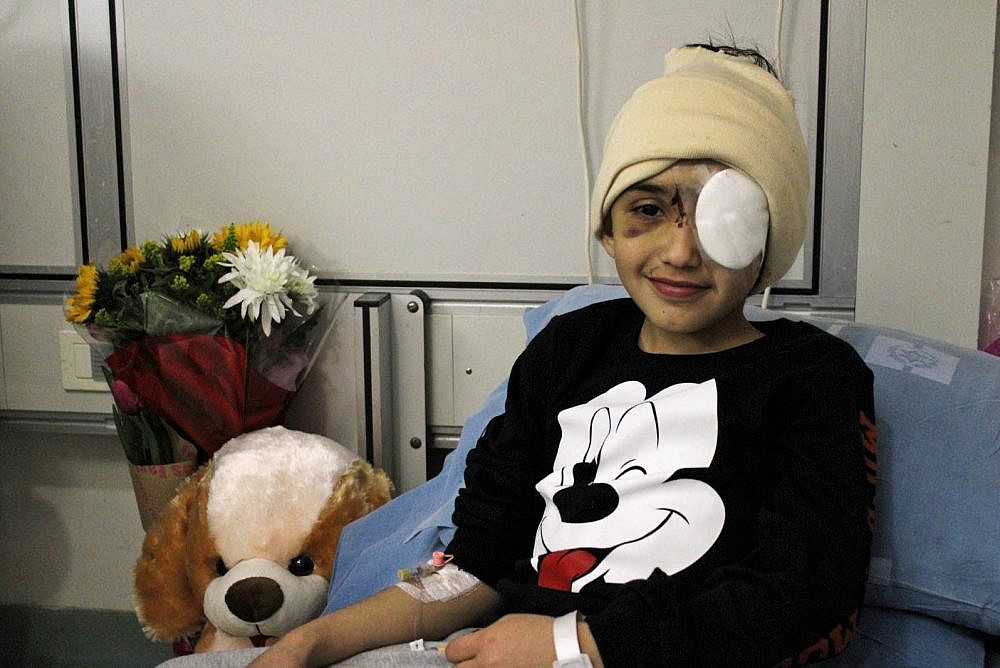 Malek Issa at Hadassah Hospital in Jerusalem. Malek was shot in the eye by a sponge-tipped bullet fired by an Israeli police officer in Issawiya on Feb. 15. (Sharona Weiss/Activestills.org)

For more than a week since their nine-year-old son Malek was shot in the eye by a sponge-tipped bullet, Wael and Sawsan Issa kept vigil over him together with friends and relatives at Hadassah Hospital in Jerusalem, first at the intensive care unit and then at the pediatric ward.

Despite several surgeries, doctors were unable to save Malek’s left eye and thus had to remove it. After being sent home on Monday, the family returned to Hadassah a few hours later due to the pain the boy was suffering.

Concerns that Malek might have suffered brain damage have been allayed and he has been communicating, says his father Wael Issa. “He is sleeping. He does not want to speak with anyone. It hurts and he wants quiet. It will take some time.”

The bullet that hit Malek’s head was shot by an Israeli police officer on Feb. 15, during an arrest raid by Israeli forces in the Palestinian village of Issawiya in East Jerusalem. According to press reports, the officer claimed he had shot the bullet at a wall to calibrate his sights.

The police also claimed they were responding to protests they had encountered during the arrest; however, video footage of the incident showed only normal street traffic in the area.

“We know the boy was injured in the upper part of the body when the police were on patrol in the area,” Police Spokesman Micky Rosenfeld told +972. “As far as we know, the incident is being investigated by the Ministry of Justice,” as per protocol when civilians are injured by a police officer, he says.

Issa charges that the bullet was aimed directly at the middle of his son’s forehead. 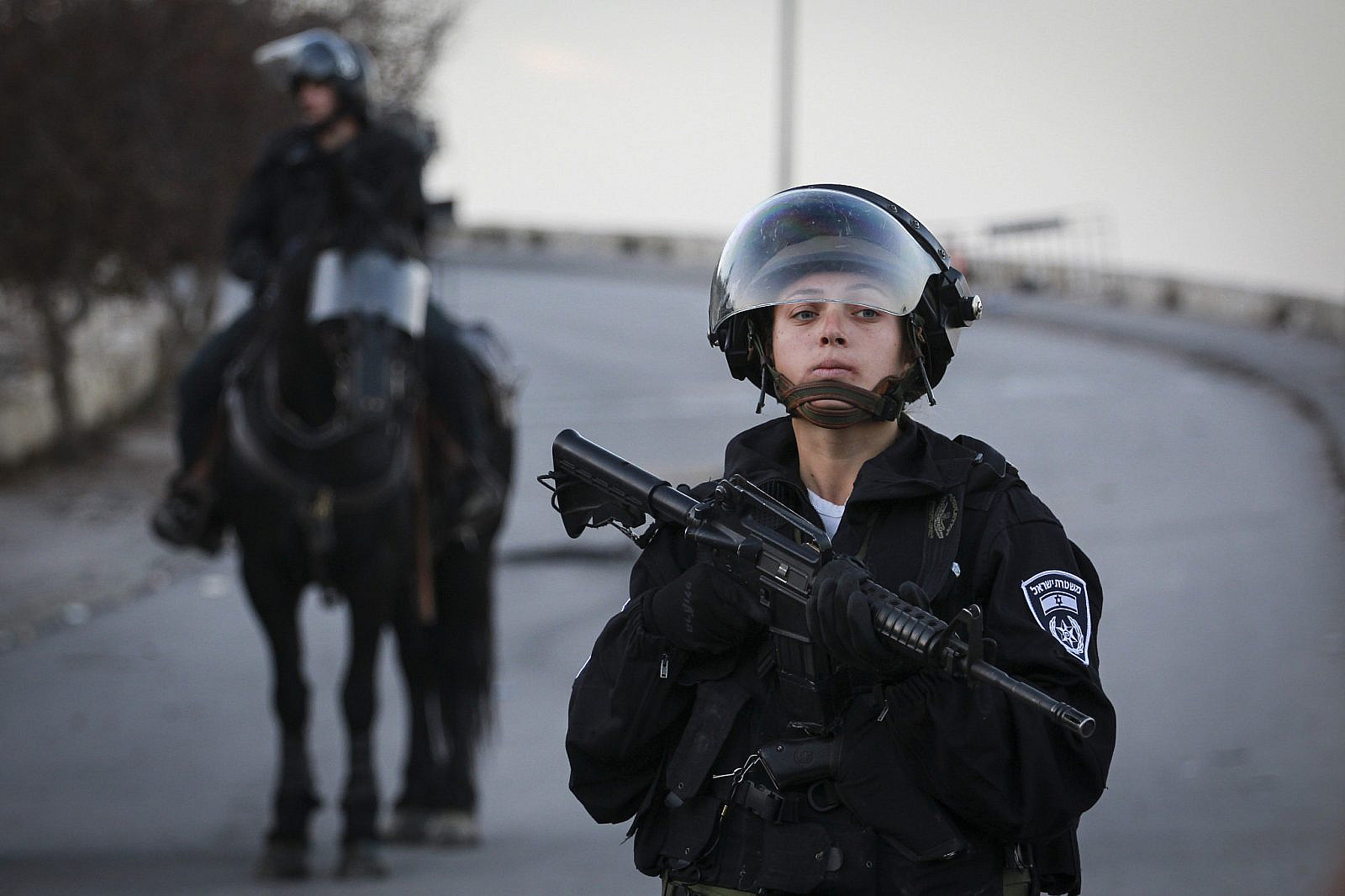 An Israeli Border Policewoman stands guard during a demonstration in Issawiya, East Jerusalem, against the new cement blockades at the entrances to Issawiya, on November 12, 2014. (Hadas Parush/Flash90)

Eyewitnesses, including Malek’s 10-year-old cousin who had been with him and his two sisters when they stopped at a kiosk to buy a sandwich, also say there were no disturbances on the street.

The cousin, whose mother asked that his name not be used, explained that Malek did not hear his sisters telling him to wait because there were soldiers in the street, and had run ahead of them. “Then he fell to the floor,” the cousin said.

For the cousin’s mother, this incident is a familiar story in Issawiya. “The police come to make arrests when the children are coming out of school,” she says. After the shooting, her child “was very nervous at home. It is as if they also injured my son.” A social worker and psychologist were to meet Malek’s classmates to help deal with their traumas from the event, she added.

The shooting is not an isolated incident. Malek is the eleventh child from Issawiya to lose an eye from a rubber-tipped bullet, says his father, who has left his job at a Tel Aviv restaurant to be with his son while he recovers. His wife and daughters have sought counseling, he notes, but he is doing without.

Issawiya has been the site of increased police patrols and arrests since last summer, with over 700 people arrested and one youth killed. Residents have complained of constant harassment by the Israeli authorities, with parents fearing for their children’s safety in public.

“I don’t allow my children to go outside and play anywhere,” says Issa. “I’m afraid all the time. But they had come back from school, and their mother told them that it was a nice day and that they could walk home from where the bus dropped them off. They stopped for a minute to buy some sweets, and despite all my precautions, Malek was shot.” A tour through the village reveals many apartment buildings donning brand new roll-down blinds — not out of aesthetic concern or because people have money to spend, but for protection against stray bullets, says community leader Mohammed Abu-Hummos.

“It is a daily thing,” says fellow village resident Hashem Ashahab, who has five children. “The police come to create tension. There was an agreement (with local leaders) that they would not come when schools let the children out, but they broke the agreement… Why do the police always choose to come to make their arrests and patrols during the time when there is the most traffic? I have five children, three of them go to school, and I am always afraid something will happen to them. [But] I can’t not send my children to school.”

Climbing into a minivan used for local transportation in Issawiya, a woman, 35, who declined to give her name, says incidents between the police and the youth could break out at any moment, and residents always have to be on alert.

Aviv Tatarsky, a research assistant at Ir Amim who has been tracking the situation in Issawiya in cooperation with local Palestinian residents, explains that there has been “quite an intense police disruption of freedom of movement and safety of the residents” in the village since June 2019.

Though the intensity of the summer raids have decreased for now, they are still ongoing, Tatarsky says. Despite dialogue between the police and local leaders under the auspices of the Jerusalem municipality, he adds, police have disregarded the agreements reached, as resident Ashahab similarly charged.

The Jerusalem municipal courts and the Israeli Welfare Ministry have not been vocal enough against the police raids which disrupt the lives of the village residents, continues Tatarsky, though council members Laura Wharton and Yossi Chaviliao, together with a group of 40 school principals, have appealed to Jerusalem Mayor Moshe Lion about the situation. “Maybe a few things are said behind closed doors but certainly not in the open,” he says. 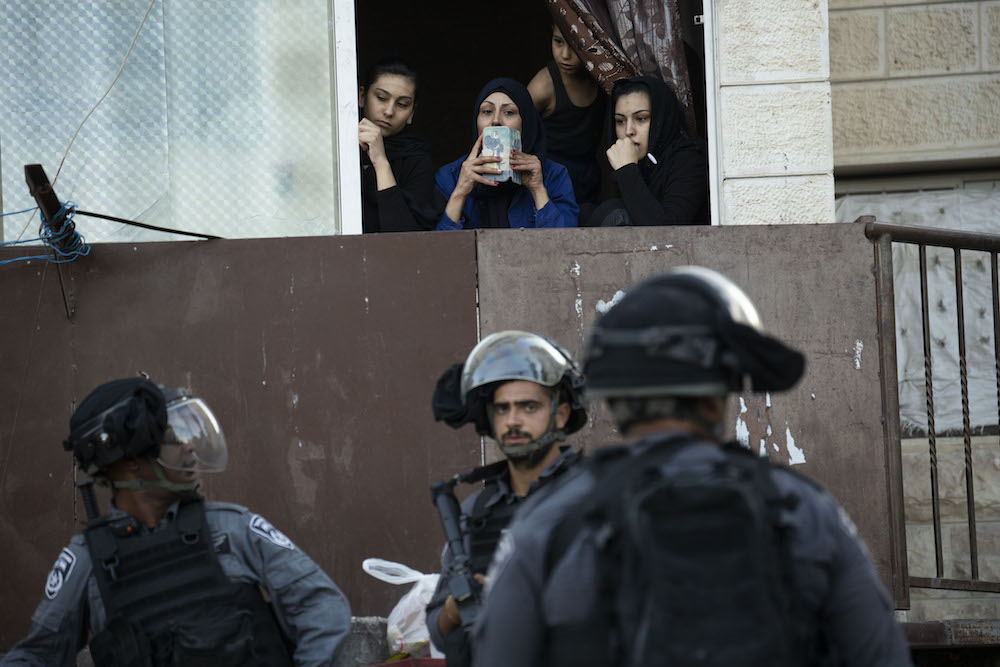 A high-ranking official in the municipality’s education department tried to offer himself as an intermediary between the residents and the police, says Tatarsky. “But without the backing of the mayor they do not have the power to stop the police.”

Police Spokesman Rosenfeld told +972 that police patrols are carried out in all East Jerusalem villages to prevent violent activities from taking place and to respond when they do occur.

He says that “severe incidents” had been taking place over the past months in the neighborhood, including petrol bombs and stones thrown at police cars and at cars traveling along the Jerusalem-Ma’aleh Adumim highway (Road 1), located below the village. In October, he added, a local resident’s vehicle was hit by a Molotov cocktail intended for a police car. “Unfortunately in that village, there are many more incidents than in other villages,” says Rosenfeld.

Tatarsky holds that the image of Issawiya as a hot-bed of violence is more of a creation of Israeli imagination than anything else. “If you look for attacks or groups who are active in Issawiya you will find none. It is very telling that the police have not been able to show any single event or series of events that prompted its attacks.” “He made a few changes in policing East Jerusalem, more aggressive,” he explains. For example, Yadid re-introduced the use of border police in Palestinian neighborhoods instead of the regular community police patrols which had been used by his predecessor.

But Yadid’s hardline tactics to disrupt daily life including through collective punishment to “break” Issawiya residents is a “big mistake,” warns Tatarsky. “He achieved the opposite: resistance and opposition. Opposition against military presence in the neighborhood is… worse than it used to be with his predecessor. Border police are not welcome in Issawiya.”

Moreover, according to Tatarsky, out of some 700 arrests made by the police, only 20 indictments have been issued, and even then for acts that were committed only because the police entered the neighborhood.

“You terrorize youth who now have all kinds of psychological damage and anger. This has caused more damage and (the police chief) is not able to show anything he actually achieved,” says Tatarsky.

“What is happening in Issawiya is unprecedented,” he adds. “We never had such an intensive violent disruptive campaign with really no reason and for so long.”