facebook twitter email link
Dozens of American, Israeli and Palestinian protesters gathered Friday in front of the Israeli consulate in Boston to mark the death of Jawaher Abu Rahmah. Jawaher was killed by American made tear gas fired by the IDF on New Years Eve during a weekly unarmed demonstration in the West Bank village of Bil’in. 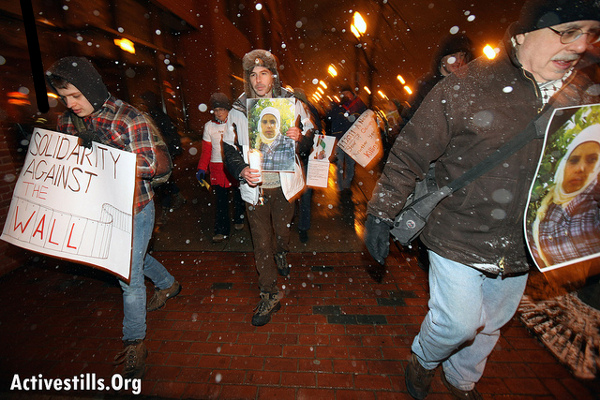 The Boston demonstrators marched through the snow and frigid cold weather demanding an end to US military aid to Israel. The demonstration is a natural extension of the one held in front of the US ambassador home in a northern Tel Aviv suburb last Saturday night. Israeli activists ‘returned’ empty tear gas canisters to the ambassador. Twelve people were arrested and jailed for three days. 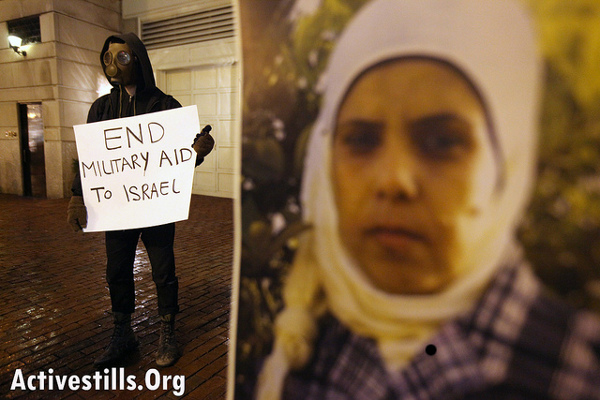 "End Military Aid to Israel" Photo: Activestills.org
Israeli activists throughout the world are beginning a new phase of vocal protest against Israeli behavior in the West Bank. No longer satisfied with convincing the Israeli public of the corrosive nature of the occupation, Israeli activists are pushing an aggressive program of BDS (Boycott, Divestment and Sanction) aimed at the United States. BDS is the globalization of nonviolent Palestinian resistance which began in 2005. While the numbers of Israelis advocating BDS remains small, they are organized and growing. Naturally, Israel is expected to increase punishment for Israelis advocating BDS and especially Israeli activists protesting the ‘special relationship’ between the United States and Israel.
Get Our Weekly Newsletter