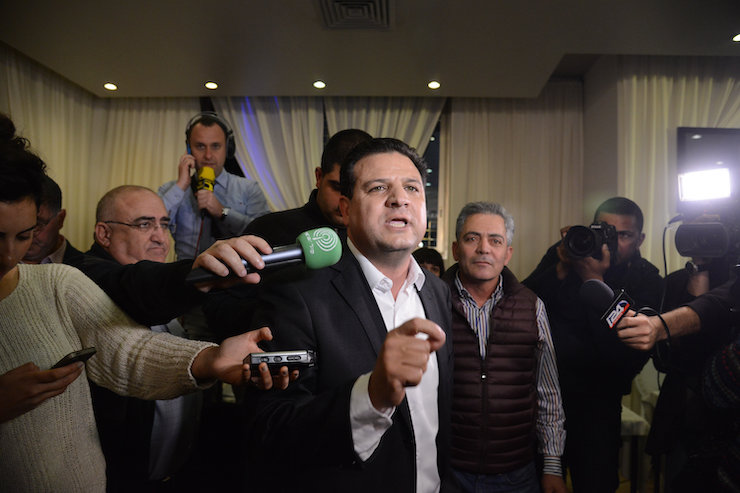 Ayman Odeh, head of the Joint List party, speaks to supporters at the party headquarters in Nazareth as the exit polls in the Israeli general elections for the 20th parliament are announced on March 17, 2015. (Basel Awidat/Flash90)

For consumers of Israeli media, there are essentially two separate election campaigns taking place right now, says Dr. Maha Karkabi Sabah, a researcher in the sociology of gender. The first campaign is the central one, and the second, concerning the Palestinian Arab citizens of Israel, exists somewhere on the margins.

The problem with how Israeli media covers the Arab community, especially during elections, is twofold, explains Karkabi Sabah: in scope and substance. “In terms of scope, coverage of the Palestinian Arab community lies on the margins, just like our standing in Israeli society. The media focuses on issues and events that are of interest to the Jewish community, and gives the impression that this is what consumers want, that developments in the Arab community are not interesting or relevant to national politics,” she adds.

“In terms of substance, the media mostly covers events, and doesn’t provide analysis of strategies or trends,” she continues. “They don’t try to understand what lies behind how elections are perceived in the Arab community, and how they’re connected to the general system. The reports take a factual tone and focus on the decisions that are made, and there isn’t so much of an effort to provide a deeper picture of how or why these decisions are made, or their impact on the general election campaign as a whole.

“The media operates in a way that bolsters the public discourse that’s relevant to the ruling group, instead of challenging it; instead of introducing the Jewish public to information that can deepen its understanding of the complex position of the Palestinian citizens as a national minority in a country that defines itself as Jewish and democratic,” Karkabi Sabah says. “Of course, there are those who do comprehend this complexity, but they, too, end up propagating a discourse that excludes Arabs and delegitimizes their political demands, especially those of their political representatives.”

For example, “a strong trend in some of the news coverage is reports that reinforce prejudice, sustaining the impression that Arab parties and political leaders ignore important issues while prioritizing the Israeli-Palestinian conflict,” says Karkabi Sabah. “When I’m interviewed on the elections, there is always the question of what I think about our leaders being so preoccupied with the conflict. My response is: ‘Is this a serious question? Why won’t they deal with the conflict? Are we supposed to seek someone’s stamp of approval for this?’

“After all, it only makes sense that they will deal with the conflict. As a voter, I would expect them to think about and take a clear position on the conflict and everything related to it. You can’t undo the sense of national belonging to the Palestinian people in the identity of Arabs in Israel. If the politicians weren’t dealing with it, that’s when I’d be concerned.”

Many claim that the media here serves a Jewish audience, and therefore one can’t expect coverage of the Arab community. How would you respond to that?

“The position and the working assumption of the media today are an expression of Israel’s policy, which is an ethno-nationalist policy and is far from being multicultural, both in terms of the public discourse and in practice. The media’s disregard of 20 percent of Israel’s population only deepens the divide in society. The media has a central role in confronting voices of segregation and de-legitimization. But it also has the power to promote these voices. If the media ends up participating in the process of segregation, which is only increasing over time, it will intensify the divide between Jews and Arabs.

“Why should this interest Jews? Because being familiar with those who are otherized and who are different is highly important to creating a healthy social fabric. The relationship between the two populations is based on stereotypes that are partly perpetuated by the media. Personally, I work with the Jewish population most of the week, and I’m not the only one – it’s a trend that’s only positively increasing over time, because the Arab population is going through significant social changes as well, and more and more young Arabs are being integrated into the Israeli job market. If there’s no feeling of acceptance in the air, it will create a very hostile and difficult environment for both groups that are increasingly having to engage with each other.

“The further the division deepens, I think the loss is not only for the Arab community but also for the Jewish one, because the hostility is reflected back. There were incidents in the past in which the Jewish population tried to recruit Arabs as allies in social or economic issues, and the Arabs said, ‘no thanks, now you recognize our existence?’ There are many interests that can be shared, that are central to any citizen of Israel, regardless of nationality.

“As the divide deepens, though, I think everyone loses. This might sound counterintuitive for many Jewish Israelis, who approach this from a position of power, as the ruling group. As time goes by, it will be harder to treat this hostility. This is where the media can take on a positive role.”

If you could address journalists directly, what would you tell them?

“I would recommend that journalists avoid replicating the existing inequality in Israeli society, and suggest they become ‘ethnically blind.’ In terms of the scope of the discourse, to provide a platform for other voices – a worthy platform, not on the sidelines. No less important is the content: to create a media landscape in which it’s possible to challenge political issues, like the state’s character and solutions to the Israeli-Palestinian conflict, and not only cover violent incidents.

Is there a correlation between coverage of the Arab community in Israeli media and the low voter turnout?

“It’s not a direct relationship, because voting rates are also impacted by processes inside the Arab community, as well as the question of their status in the country. As long as the media doesn’t challenge the segregationist narrative and tries to create an alternative discourse, it will have zero ability to affect voter turnout. For example, lately we’re seeing some media organizations trying to explain the importance of raising voter participation among Arab citizens for the purpose of replacing the government. In my opinion, the impact of this discourse on raising voting rates is minimal, because it serves to promote the Israeli left’s agenda, which, in the Arab community, is considered no less exclusionary than that of the Israeli right.”