In a hearing called by the committee for Immigration Absorption and Diaspora Affairs on Wednesday to discuss the “breaking of norms regarding the relation of Diaspora Jewish communities to Israeli governments,” the 3-year old progressive American Jewish lobby J Street was probed and vilified as an anti-Zionist organization whose love for Israel is conditional and thus disqualifies it from being “pro-Israel.” 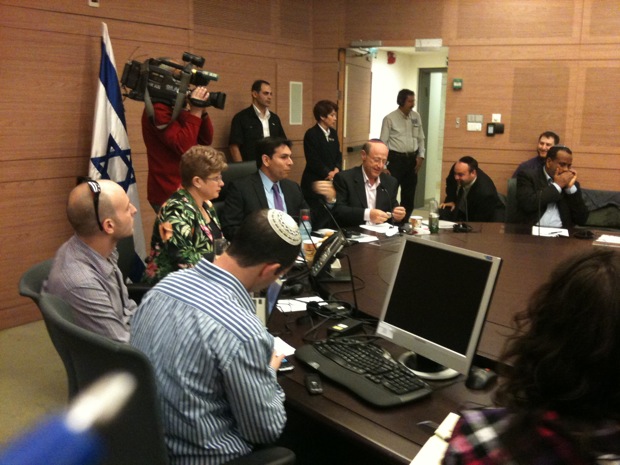 Committee head MK Danny Danon (Likud) asserted his dislike for J Street due to its actions “against Israel” and expressed disapproval of the five members of parliament who attended its annual conference in Washington, DC last month. He screened a YouTube video (composed by a rightwing settler movement called “My Israel” whose home page features a video of Glenn Beck) showing a woman who attended the J Street conference claiming Hamas is no more a terror group than the IDF.

Some of the other attacks levied against J Street included: its stance on the Goldstone Report (J Street did not endorse it but rather stressed the need for Israel to set up an independent commission to investigate the war); the 170,000 members J Street counts as its constituency (claims were made that his number is fictitious because members do not pay dues but are rather counted through the website); its endorsement of the “Gaza 54” house letter urging the Obama administration to pressure Israel to ease the Gaza blockade; its affiliation with Daniel Levy – lead Israeli drafter of the Geneva Accord and member of Israeli delegation to 2001 Taba summit and currently a senior fellow at the New American Foundation – who helped found J Street, due to a quote taken out of context in which they claim he said Israel is not a good idea if it can only survive by the sword. (In fact Levy was taking a cynical jab at those who delegitimize Israel for its very existence as opposed to its actions.); a large donation it received from an unknown woman from Hong Kong; its support for the Sheikh Jarrah Solidarity Movement  (in truly McCarthy-like style a picture of Jeremy Ben-Ami with a Palestinian resident of the area who has been evicted from his home was circulated around the room) 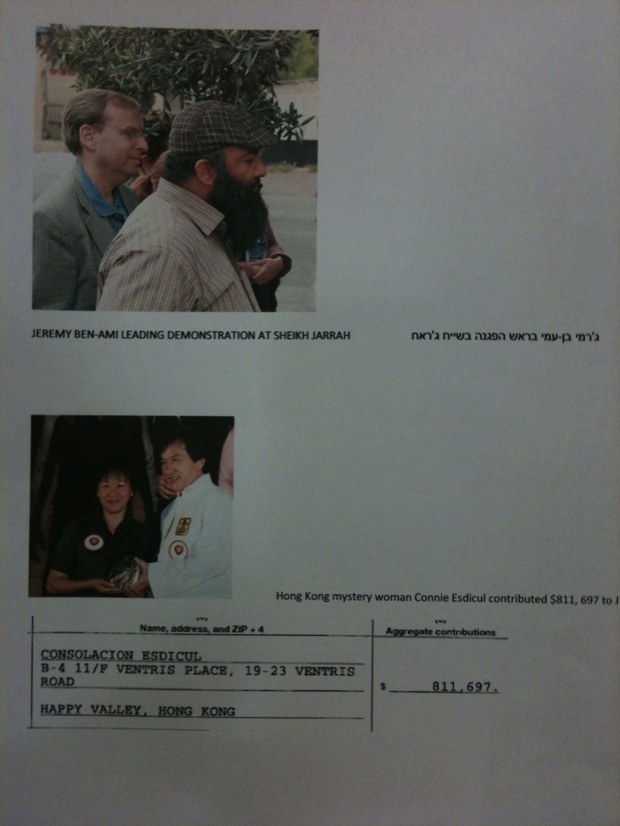 MK Danon posed two specific questions to J Street Director Jeremy Ben-Ami, who flew from DC especially to attend this hearing. The first, asking whether J Street was opposed to the implementation of sanctions against Iran, was gratuitous since J Street openly worked to ensure those sanctions, as Ben-Ami affirmed in the hearing. The second regarded J Street’s urging the Obama administration not to veto the UN Security Council Resolution condemning Israeli settlements as illegal (which every UN member country except the US voted in favor of). Ben-Ami replied that J Street originally encouraged the US to put forward a new initiative that could delay or circumvent the UN since “the UN is biased against Israel” – but since this did not happen, J Street told the US not to veto a resolution that is perfectly in line with its policy of opposing settlements and which has been its position for the last eight American administrations.

In a prepared statement he recited in English, Ben-Ami clarified that he did not come to the hearing in order to apologize to Israel, but rather to affirm his commitment to the country and to warn it of the risks involved in alienating American Jews who do not share the government’s views and in its further isolation in the global arena. Ben-Ami’s calm and calculated demeanor stood in stark contrast to the rowdy behavior and hostile screaming matches conducted between various members of parliament. Even those MKs arguing in J Street’s defense did so tastelessly. At one point MK Zuaretz (Kadima), sitting right next to Ben-Ami, started screaming at the top of her lungs at MK Danon that J Street is not supposed to be an arm of the Netanyahu government.

MK Otniel Schneller (Kadima) who called for the hearing, claimed the discussion was not a political one, but rather a normative one about values that is couched between “exile and redemption.” Not only did calling Diaspora Jewry in “exile” become passé in 1950, but pitting exile against redemption only works to polarize relations between Israel and American Jewry. Schneller went on to claim that J Street only loves Israel when it is comfortable for it to do so, and since it has not been, it prefers to disassociate itself. He stressed that Israel is a Zionist, democratic and Jewish state and that J Street has no right to decide the country’s policies from across the Atlantic. Despite his insistence that most Israelis are concerned over J Street’s activities, a Forward poll shows that most Israelis don’t even know what J Street is, and of those that do, forty percent think its perfectly alright to oppose government policies, as long as Israel’s right to exist is not challenged.

J Street representative and former MK Davidi Gilo pointed out that J Street is not the first American Jewish group to challenge Israeli government policies, citing the Zionist Organization of America’s opposition to the Oslo accords and the withdrawal from Gaza. Furthermore, he named both Irving Moskowitz and Sheldon Adelson as Americans who have a significant impact on Israeli policies from afar, the former due to his financing of East Jerusalem settlements, and the latter, as owner of the free daily newspaper “Israel Hayom,” known to be a mouthpiece for his close friend Prime Minister Netanyahu.

All the MKs present who spoke in J Street’s defense (and even some who did not) insisted that it is asinine for the Israeli government and embassy not to meet and enter dialogue with them, since no Jew should be dismissed. MK Nachman Shai (Kadima) expressed that he disagrees with almost everything J Street says, but was happy to participate in their conference and engage its constituency. However, even the most progressive of the MKs who articulated that the settlement project is anti-Zionist, insisted J Street’s stance vis-à-vis the US veto of the UN resolution was a mistake.

The hearing lasted nearly three hours and was poorly moderated. Some commentators were given too much time to speak while others, even Ben-Ami himself, were asked to keep it brief. Often one could not understand what was being said amidst all the yelling, which at times turned into highly personal attacks. The shouting was not only tolerated but taken as an acceptable form of communication, especially shameful in the presence of guests from abroad and foreign journalists.

A most embarrassing moment

Sitting in that room with all these elected officials, listening to them scream as Ben-Ami sat quietly watching on, I could not help but feel ashamed.  What struck me most about it was the fact that there was no concept of the basic notion of respect for another person’s voice, for the value of listening, of dialogue. How could a government of this fabric, I thought to myself, be expected to conduct respectful dialogue with fellow Jews, much less reach an agreement with its non-Jewish adversaries, when it is not even able to conduct a civilized discussion in its own chambers?

At the close of the discussion MK Danon stated that the committee had reached the conclusion that J Street is in fact a “pro-Palestinian” organization. Following the hearing, Ben-Ami said: “This was an extremely important discussion that has enormous impact on future relations between Israel and Jews abroad. I feel good that open and free dialogue took place.” Amid a barrage of questions by journalists following the session, including whether Ben-Ami is a Zionist, he assured me that he felt welcome in the Knesset.