The decision not to define ‘price tag’ attackers as terrorists shows the settler lobby’s influence in the Israeli government and highlights the inequality of law and law enforcement in the West Bank. 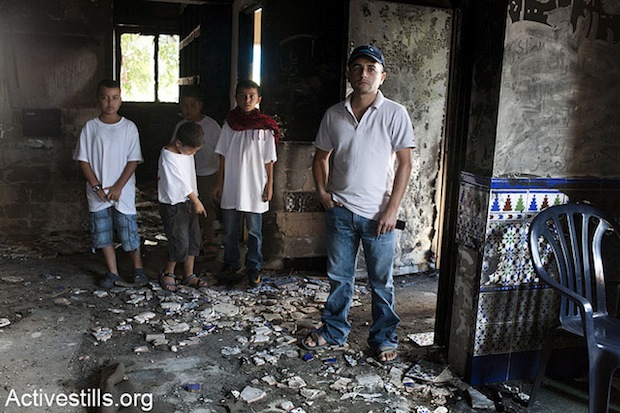 Prime Minister Netanyahu and his security cabinet have declared that ‘price tag’ perpetrators – thugs who attack Palestinian property in the West Bank, vandalize Christian or Muslim holy sites and private homes of left-wing activists within the Green Line – will not be labelled “terror” groups, but rather as “illegal associations.” The designation is important because it indicates which laws authorities can apply in their effort to crack down on these activities.

Israeli news has been reporting the authorities’ frustration in trying to break into the cells and prevent the attacks; the move is supposed to be part of a stepped-up effort to address the problem. It is hard not to be cynical, though, when military courts and jails are full of Palestinians for every stone thrown, but other crimes – like torching cars and burning mosques – just seem far too complex and sophisticated for a simple Israeli intelligence outfit to solve.

In truth, I don’t think this is worth a lengthy moral or ideological debate about whether the group should be labelled as terrorists in general, since it has not killed civilians, thank god. What matters is that the government stop the violence that indeed terrorizes people and sows lawlessness in the land under Israel’s control, while entrenching the unequal standards of law enforcement for two different populations. To that end, perhaps the most deplorable point in Haaretz‘ coverage of the issue (Hebrew) is the following. Barak Ravid writes:

Prime Minister Netanyahu hesitated from the decision to declare “price tag” activists as a terror organization, especially against the background of political pressure from settler leaders in the West Bank and from the Jewish Home party, as well as figures in his own party. Holding a vote within the government about defining the “price tag” activists as a terror organization could have sparked a coalition crisis. [My translation – DS]

So if true, the settlement leaders who have gone out of their way to publicly decry such acts, are now privately pressuring the government (Ravid cites an unnamed source) into taking softer measures in the extremely urgent need to combat the violence. The elected leaders of Naftali Bennett’s Jewish Home and Likud parties, who sit in the governing coalition and therefore lead this country, argue against a designation that would allow authorities to fight this scourge more extensively.

This is not a left- or right-wing issue: Justice Minister Tzipi Livni and Defense Minister Moshe (Bogie) Yaalon favored the “terrorist” label. It’s simply a political defense of price tag violence. What kind of commitment to order and justice does that show from public officials?