Darfuri asylum seeker Babikir Adham-Uvdo was beaten to death by two teenagers after he was allegedly seen speaking to a group of young women. Why aren’t more Israelis talking about it? 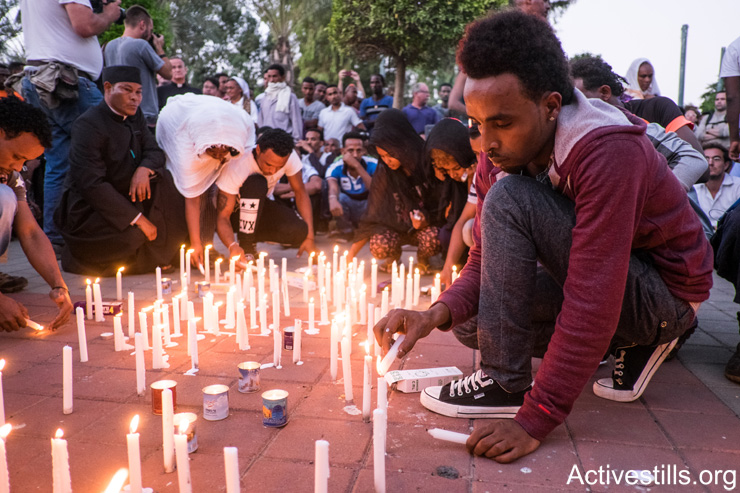 Members of the Eritrean community in Israel light candles at a memorial service for a memorial ceremony for asylum seeker Habtom Zarhum in Levinsky park in south Tel Aviv, October 21, 2015. (Oren Ziv/Activestills.org)

Emmett Till was an African-American teenager from Mississippi who was lynched on August 14, 1955 during a visit to his relatives. His murderers mutilated him and threw his body into the Tallahatchie River after he reportedly flirted with a 21-year-old white woman by the name of Carolyn Bryant.

After they were were acquitted, Till’s killers admitted to the crime in an interview, claiming that they did not believe there was anything wrong with what they did. The lynching was one of the central catalyzers of the civil rights movement.

Two weeks ago two Israeli teens murdered Babikir Adham-Uvdo, a Darfuri asylum seeker who lived in the city of Petah Tikva, not far from Tel Aviv. Adham-Uvdo was attacked after he reportedly spoke to two white teenage girls. The teenagers kicked him in the head for an hour and a half, leaving him for dead. His body was found and brought to Rabin Medical Center. After four days in the hospital, Adham-Uvdo was taken off life support and died.

This is an absurd claim: whoever kicks a helpless person in the head for an hour and a half clearly intends to kill him. It is also clear that the killing was racially motivated: had a white person been caught with the teenage girls, we could safely say that the two attackers would not act the same way.

Channel 10’s Itay Vered’s excellent report [Hebrew] shows how several Petah Tikva locals responded to the attack. One woman can be seen saying “whoever isn’t Jewish can go fuck himself,” a different woman says “this is the Jewish state, why do we need Muslims?” while a passerby is asked his opinion on the fact that a brutal killing had taken place right where he was standing. His response: “Okay, so what? Yalla.”

When Miri Regev, the member of Knesset who once declared Sudanese a ‘cancer’ during an anti-refugee rally, becomes the minister of culture, the message is hard to miss and the results clear for all to see. When the government insists on passing racist laws against asylum seekers and imprisoning them in detention camps, it is sending the public a message that it has a free hand to fear and harm refugees. 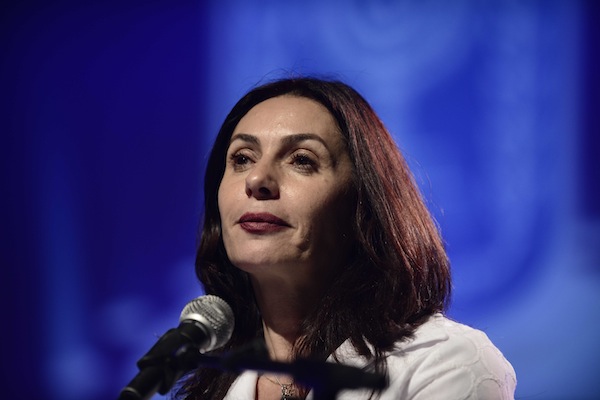 Several hundred asylum seekers live in Petah Tikva. The argument that the large numbers of refugees is the cause of the hatred against them — as we often hear in south Tel Aviv — simply does not hold water there. Even the claim that the majority of asylum seekers are “foreign laborers,” repeated ad nauseam, is a reflection of ignorance and lies.

Adham-Uvdo was an asylum seeker from Darfur. In fact, the finger that he lost in the fighting in his home country was the only way to identify his body, which had been mangled to the point that doing so was nearly impossible. There is no argument that anyone who fled the genocide in Darfur can, at the very least, be called an asylum seeker. And this is before we even start talking about Israel’s involvement in the atrocities taking place there.

It is obvious that had an African asylum seeker beat up an Israeli, the story would be making headlines for weeks. But Babikar Adham-Uvdo was killed while black in Israel.

*John Brown is the pseudonym of an Israeli academic and a blogger. A version of this article was first published in Hebrew on Local Call. Read it here.