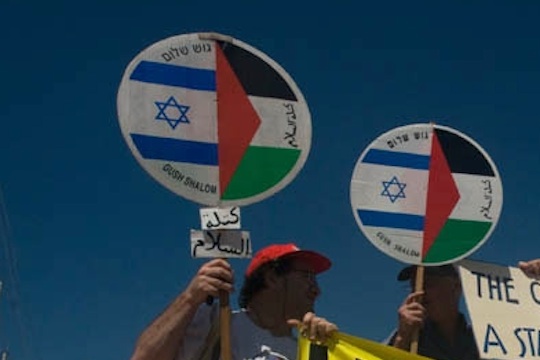 Israeli and Palestinian flags in a peace march. 74 percent of Palestinians fear that they will be hurt by an Israeli (Activestills.org)
A poll released Tuesday reveals pessimism and mistrust among Israelis and Palestinians. Members of both societies seriously doubt the chances of meaningful negotiations taking place.

At the same time, there is no alternative for the two-state solution that gains substantial support. Sixty-three percent of Jews oppose a single-state solution. Even a larger number among Palestinians – 69 percent – opposes the idea. The last figure is a bit surprising, suggesting that the one-state solution’s popularity within the intellectual elite has yet to take precedence over the Palestinian desire to separate from the people who have controlled their lives for so long.

One place where Palestinians and Israelis differ is with their attitude toward the Saudi plan (also known as the Arab Peace Initiative). According to this idea, Israel would withdraw from all the areas it conquered in 1967, and an independent Palestinian State will be established; and the refugee problem will be solved in a way which both parties agree to. In return, all Arab countries will recognize Israel and establish full diplomatic relations with it. In a poll conducted two years ago, both Israelis and Palestinians had the same level of support for the idea. Today, a majority of Palestinians (56 percent) support the Arab Peace Initiative (as it was defined above) while most Israelis (67 percent) oppose it. Today, only 24 percent of Israelis support the plan. Those figures might support something I have written several times in the past – that Netanyahu is constantly moving the Israeli public to the right.

Related
Give the Palestinians a break, Kerry, and stay home
Analysis: A recipe for diplomatic collapse