New polls find that a majority of Jewish Israelis support the ‘voluntary transfer’ of West Bank Palestinians, a majority want to strip East Jerusalem Palestinians of Israeli residency. It’s true that most peace efforts followed war and violence — but not because the Israeli public wants them. Even in times of crisis, a brave leader can change all that. 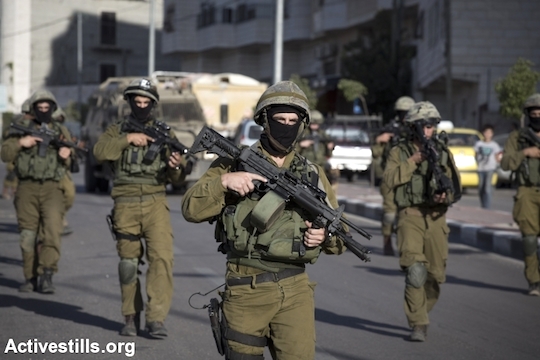 Israeli army soldiers march through the Palestinian city of Hebron,  June 17, 2014. [Archive photo by Oren Ziv/Activestills.org)
The latest crisis of violence has become a successful campaign of terror: Israelis are profoundly shaken. Many have reverted to the Second Intifada mentality of personal risk calculations based on self-selected danger factors and fingers in the wind. People avoid Jerusalem and buses, and innocent people have been killed in frenzied anticipation of attacks.

It is too early to know what the lasting impact of the current violence will be, but Israeli attitudes being documented in real time raise some longstanding questions: is violence the only thing that shakes Israeli complacency and makes Israelis consider concessions? Or does it spark an eye-for-an-eye mentality?

A majority of Jewish Israelis supported giving up on the Palestinian areas of Jerusalem in two recent polls – 66 percent in a Maariv poll from mid-October, and 56 percent in a small poll of 300 Israelis for the Knesset channel, published in late October (Channel 2 reported 50 percent from the same survey). The reporting does not specify whether the sample includes Arabs, instead referring to “the Israeli public” – although it is a small sample with a nearly six percent margin of error.

Giving up parts of Israeli-annexed East Jerusalem has generally been considered a center-left position. It reflects the vision of the Oslo, Camp David and Clinton/Geneva two-state negotiations in which the city would be divided so that two states can have their capitals there.

Does this mean Israeli society has tacked to the left? If so, is it true that “Israelis only understand force?” (Of course Israeli Jews are also deeply committed to the image that Palestinians and Arabs only understand force. It is this axiomatic belief that the Right uses to advocate military action as the answer to nearly all political dilemmas.)

Some Israeli analysts insist that Israel has only ever made concessions or advanced peace negotiations after wars: the 1973 Yom Kippur War led to the first Camp David negotiations in 1977 and ultimately the peace agreement with Egypt; the First Intifada led Yitzhak Rabin to realize that the occupation must eventually end and pursued Oslo; the Second Intifada led Israel to withdraw, partly, from Gaza. In the most detailed book on public opinion during the Second Intifada, veteran Palestinian pollster Khalil Shikaki and Israeli academic Jacob Shamir showed that during the most violent years of the Second Intifada, public support for certain concessions such as withdrawing from settlements rose, and Ariel Sharon’s disengagement plan from Gaza emerged at this time with high support.

But the other side is that violence enrages Israelis. The mentality of reprisal floods the national consciousness and Israelis believe they must hit back hard to crush them – whatever “crush” and whoever “them” means. Shamir and Shikaki also found that during the most intense phases of violence in the early 2000s, support for tougher military action against Palestinians increased. The near-consensus support, often upwards of 80 percent, that Israelis displayed for all three wars in Gaza are further evidence that for Israelis, the only answer to rocket fire on civilians is a heavy military response. 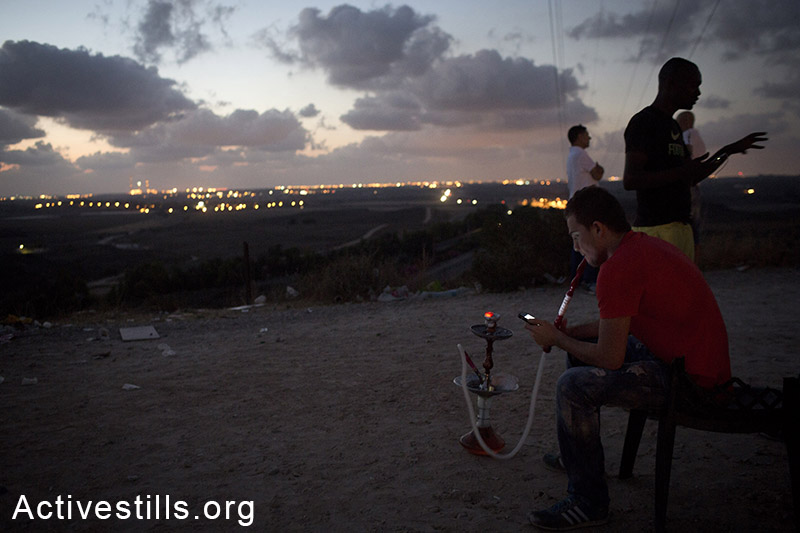 Israelis gather on a hill to watch the Israeli army attacks on the Gaza strip, and rockets that are fired from Gaza to Israel, near the city of Sderot, July 15, 2014.

Further, one look at the last decade of elections shows that since the Second Intifada, Israelis have voted almost consistently for right-wing governments. This cannot be disconnected from the perception that left-wing political visions are irrelevant in the face of what the public perceives as exclusively Palestinian violence.

In other words, Israelis may express some declarative support for concessions when the price of violence is particularly high. But over the last decade, there have been two major qualifications.

First, they simultaneously embrace conditions that preclude reaching those concessions: undertaking harsh military action that can be a game changer in itself, and voting for politicians who are unlikely to advance real negotiations – which are viewed broadly as a matter of giving gifts to terrorists.

Second, the kinds of concessions Israelis tend to support at these times are piecemeal, aimed at patching up bleeding wounds rather than addressing root causes. Israelis do not wish to transfer areas of East Jerusalem like Kufr Aqab to the PA as a goodwill gesture or a way to reach a two-state solution. They want to get rid of these areas because Jewish Israelis never go there anyway and they hope that cutting off a diseased limb might save the patient. (To be clear, that is how Israelis see it, not my personal opinion.)

At the same time, another ominous trend is setting in: like in other countries, the wartime mentality leads to even greater disregard for democratic norms, and civil and human rights.

Fully 58 percent of the public polled for the Knesset Channel supported revoking the permanent residency status of East Jerusalem Palestinians – the equivalent of stripping someone of their citizenship, except that these people are already stateless.

In the Maariv poll, nearly 70 percent of the Jewish population supported a detailed plan to get rid of specific Palestinian neighborhoods and revoke the residents’ Israeli ID cards, stop providing social services (already far inferior to the services provided to Jews in Jerusalem and elsewhere), while allowing full freedom of military action for Israeli security services in the Palestinian neighborhoods “just like in Judea and Samaria,” Maariv reported.  It was essentially a question asking whether Israelis support expanding the occupation.

That same survey, for reasons hard to comprehend other than sensationalism, tested Jewish Israeli support for a “voluntary transfer” plan for “the Arabs of Judea and Samaria” advocated by the late far-right minister Rehavam Ze’evi, who was assassinated in 2001. Another strong majority of Jews, 58 percent, supported the idea.

Nearly 80 percent in the Knesset Channel poll also expressed support for house demolitions for the families of terrorists – though an IDF study concluded that this fails to deter – and Avigdor Liberman ranked first as the person Israelis would like to see in charge of security. It is therefore no surprise that three-quarters in the same survey said that a single bi-national state cannot be democratic. Yet there was no no outcry when Netanyahu recently stated that Israel must continue controlling all the territory for the meantime – a situation that is far less democratic than one state where all are citizens, even if they are not equal.

The Maariv analysis concluded that Israelis don’t mind pulling left or right – the goal is to “get rid” of Arabs. But I read this as a deep-siege mentality in which symptomatic treatment is preferable to underlying solutions, and democratic norms are thrown by the wayside, considered irrelevant at best, traitorous at worst. The danger is clear: the non-democratic mindset is leaking into other aspects of Israeli society, from the treatment of Palestinian-Arab citizens, to freedom of expression – and we can scarcely afford any further erosion. There should be no illusion that this violence will push Israeli Jews away from right-wing hardline attitudes, despite the fact that the associated policies have been a spectacular failure.

Finally, there is perhaps the most important takeaway: leadership matters. After the the peace treaty with Egypt public opinion shifted dramatically toward support for giving back the Sinai; after Oslo it shifted dramatically toward support for a Palestinian state. But by the same logic, Netanyahu’s suggestion of revoking residency for East Jerusalem Palestinians lends tremendous legitimacy to a fundamentally wrong idea that permanent residency can be stripped just like that – simply because Israel never granted full citizenship to people on the land it annexed.

Netanyahu’s power of persuasion may be frightening — but it goes both ways. More than anyone else in the past decade, Netanyahu could have legitimized a negotiated peace agreement. The fact that he has not is inexcusable. 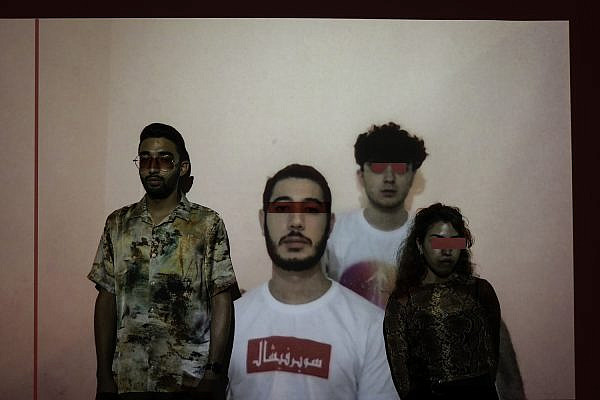 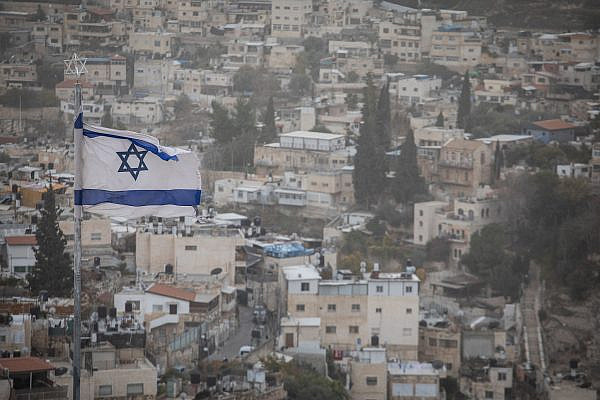