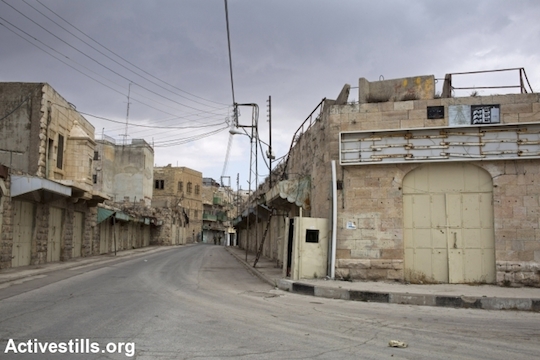 Shuhada Street in the Old City of Hebron, ‘sterile’ of all Palestinian vehicle and pedestrian traffic, November 13, 2013. Shuhada Street was the main commercial center of the city when it was first closed in 1994 to Palestinian traffic after the Ibrahimi Mosque Massacre, and later to pedestrians as the army shut down the entire commercial area. (Photo: Keren Manor/Activestills.org)

A week ago, after it was announced that President Reuven Rivlin would visit the Beit Hadassah settlement in Hebron, Breaking the Silence sent him a letter signed by over 30 soldiers who previously served in the occupied territories and Hebron, calling on him to join the organization for a tour of the city. We wanted the president to hear about our service in the territories and meet Palestinians living under occupation. Unfortunately, President Rivlin never responded to our request.

That is why Breaking the Silence activists, along with activists from the left-wing Meretz party and human rights attorney Gaby Lasky, came to Hebron on Tuesday to protest against Rivlin’s decision to ignore the situation in Hebron. We stood with signs that had soldier testimonies on them, as well as photos taken by soldiers during their service. These photos point to the reality that we know all too well in Hebron — racist graffiti, welded-shut doors of homes, Palestinians arrested in the street, settler violence, along with other photos of the day-to-day reality of occupation in the heart of a Palestinian city.

The violence began as soon as we approached Beit Hadassah. Shoving, screaming and Israeli settlers who grabbed our signs and tore them. For a moment I thought the police would, at the very least, separate between us and the settlers. But even the police began pushing us, way before they showed us an order that forbade us from protesting.

This kind of violence is not foreign to me in the occupied territories. Not so long ago I was on the violent side as a soldier; since then I’ve attended many protests. But it never ceases to amaze me how silenced I am when I am on the “wrong” side, or how Palestinians have no voice whatsoever. 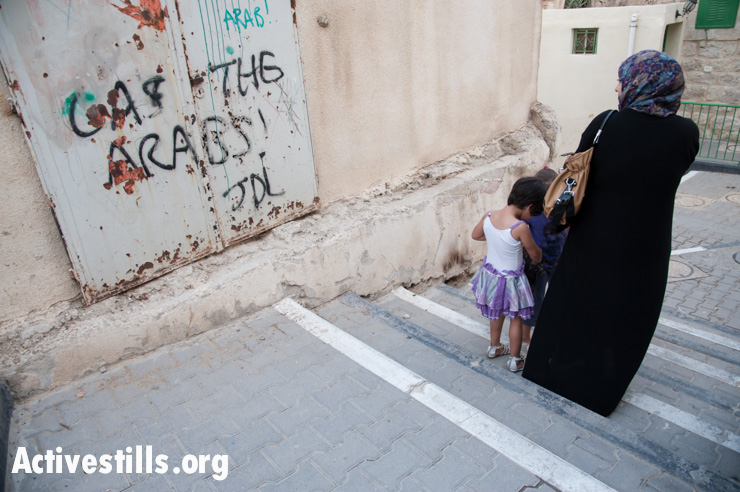 President Rivlin, who is seen by many as a moderate democrat, effectively supported one of the most extremist communities in the West Bank. He passed by dozens of Palestinian stores that were shut down in the wake of Baruch Goldstein’s massacre at the Cave of the Patriarchs in 1994. Since then, settlers have scrawled anti-Palestinian epithets on the doors of the stores, such as “Arabs out” next to a Star of David, “Arabs to the crematoriums,” “death to Arabs,” and, “We want a religious state now.”

It is a mark of shame for the State of Israel when its president stands on a street that has been “sterilized” of Palestinians. Yes, that is exactly what we called it in the army, as if the Palestinian residents of the city were bacteria.

How does this fit with what President Rivlin said just a few days ago during his visit to the United States, when he told churchgoers in Brooklyn that, “[Martin Luther] King knew that one cannot fight for his own freedom without fighting for the freedom of others.” Well, it turns out that Rivlin’s interpretation of freedom doesn’t apply to Palestinians who have lived under our occupation for nearly half a century.

Related:
In Hebron, terror begets a reign of terror
A city of devastation: Hebron 20 years after the massacre
Activists arrested in Hebron: ‘Segregation isn’t our Judaism’

Avner Gvaryahu is the director of public outreach at Breaking the Silence. This article also appears in Hebrew on +972’s sister site, Local Call.

Get Our Weekly Newsletter
Before you go…
A lot of work goes into creating articles like the one you just read. +972 Magazine is nonprofit journalism, owned by many of our writers, editors, and journalists. In order to safeguard that independent voice, we are proud to count you, our readers, as our most important supporters. With your support, we can keep +972 Magazine a strong, independent, and sustainable force helping push the global discourse on Israel/Palestine.
DONATE
More About reuven rivlin