The concept of a referendum – a direct vote by the qualified voters of a state – is customary in some countries, as part of a nation’s right to determine its future. It is only in Israel that we see the perplexing notion of asking citizens of the occupying power – rather than the occupied population – to determine the political fate of the occupied people 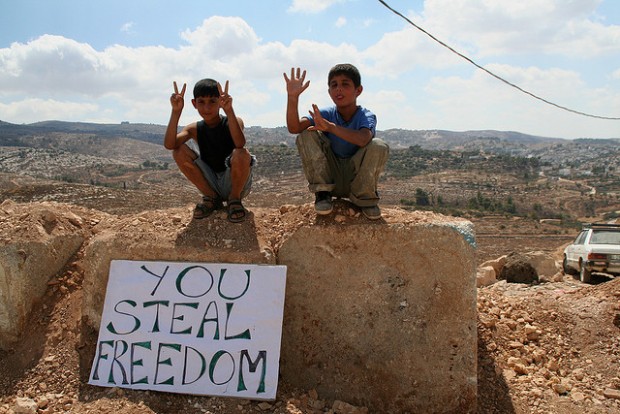 Palestinian kids during a protest against a roadblock constructed near their village. Al-Jab’a, 2006 (photo: micaelramallah/flickr)

The new legislation enacted by the Knesset, requiring a referendum to be held in Israel to approve any relinquishment of any territory to which Israeli law has been applied, is highly problematic. More than anything else, the new law makes evident the extent to which Israel has become accustomed to the denial of the rights of the Arab population living under the Israeli occupation.

Despite the fact that the law is (at this point, at least) limited to territories where Israeli law has been applied (which means that it is only relevant to East Jerusalem and the Golan Heights and not to the rest of the Occupied Territories), the determination that the citizens of Israel are the appropriate persons to vote on the future of these territories – rather than the residents of the territories themselves – undermines the claim to democracy, which underlies the idea of a referendum.
When the question of Quebec’s future was being discussed in Canada, the residents of Quebec (and not all Canadian citizens) were the ones who, in 1995, cast their votes on whether to continue to be part of Canada or to secede and become an independent state.

Similarly, the residents of East Timor (and not of Indonesia, which had occupied it) were the ones who voted in the popular consultation on the future of the territory in 1999. And in Northern Ireland, it was Northern Irish voters who endorsed the Belfast Agreement that defined their future, and put in place the complex relationship between them and the United Kingdom. In this last case, the residents of Ireland itself also voted in a referendum but only on the question of amending their own Constitution to bring it into line with the terms of the Belfast Agreement. There was no referendum for the citizens of the United Kingdom, which controls Northern Ireland, as a whole.

The use of referenda in the context of self-determination claims and in deciding the future of disputed, occupied and non-self- governing territories is not unusual. However, it is only in Israel that we find the perplexing prospect of a referendum in which it will not be the residents of the territories in question who will determine their future – but rather, the citizens of the State of Israel who will determine the future of the occupied population for them.

Considering the general Israeli denial of the rights of the Arab population and specifically the Palestinians, this may not be a very big surprise.

Prof. Aeyal Gross teaches international and constitutional law in Tel-Aviv University; he is currently also a Visiting Reader in the School of Oriental and African Studies (SOAS) at the University of London and the Joseph Flom Global Health and Human Rights Fellow at Harvard Law School. A Hebrew version of this post was published on Haoketz.org.

emailemail
Before you go…
A lot of work goes into creating articles like the one you just read. +972 Magazine is nonprofit journalism, owned by many of our writers, editors, and journalists. In order to safeguard that independent voice, we are proud to count you, our readers, as our most important supporters. With your support, we can keep +972 Magazine a strong, independent, and sustainable force helping push the global discourse on Israel/Palestine.
DONATE
More About the only democracy in the middle east