Notes on the anti-democratic movement in Israel

Yedioth Aharonot’s weekend supplement devoted a large space yesterday (Friday) to the rise of the noxious anti-democratic wave in Israel, under the title “Fascism Won’t Pass! (Or, Maybe, it Will)” . This is in itself is commendable: all too often, newspapers prefer to focus on specific incidents, or the usual scoreboard style of politics, but this time Yedioth has made an honest attempt to connect the various dots. They seem, however, to have missed several points.

First, they wrote that Israel is the first country in the world whose specific brand of fascism is religious. This is incorrect. The original fascists – French conservatives = considered Catholicism to be an integral part of native French identity. The Spanish fascist movement also had little problem with adopting Catholicism into their ideological frame, and the Church – or, to be more precise, a particularly conservative faction of it, Opus Dei – was a mainstay of this longest surviving fascist regime. The regimes in Croatia and Slovakia may have been puppet regimes, but they were Catholic-fascist puppet regimes. The Vatican maintained neutrality during WWII, but it’s clear which side won Pope Pius II’s support.

In Nazi Germany itself, several Protestant churches declared themselves to be “German-Christian”, i.e. supported the gibberish claim that Jesus was an Aryan and that the church should be cleansed of the remains of Jewish thought – this particular trick being very difficult to pull through for Protestants. The Nazi party, always a hydra when it came to making policy, was torn between supporting this strange notion and embracing pure neo-Paganism; but neo-Paganism, embraced by the SS, is also a religion. It’s impossible to say that Nazism had no religious strain: the SS men inscribed “Gott mit Uns” on their belt-buckles, and atheism was sufficient cause to be drummed out of the corps.

The misunderstanding is probably the result of the fact that Italy – the homeland of fascism as most of us know it – indeed refrained from using religious symbols. But that can be explained by Italy’s particular history: its war for independence included war on the papacy, which still claimed some vestiges of the Papal State, Rome being the most notable. Hence, Italian nationalism – interestingly, similar here to Jewish nationalism in its early stages – was born fighting the power of the church, and naturally was very much anti-clerical. 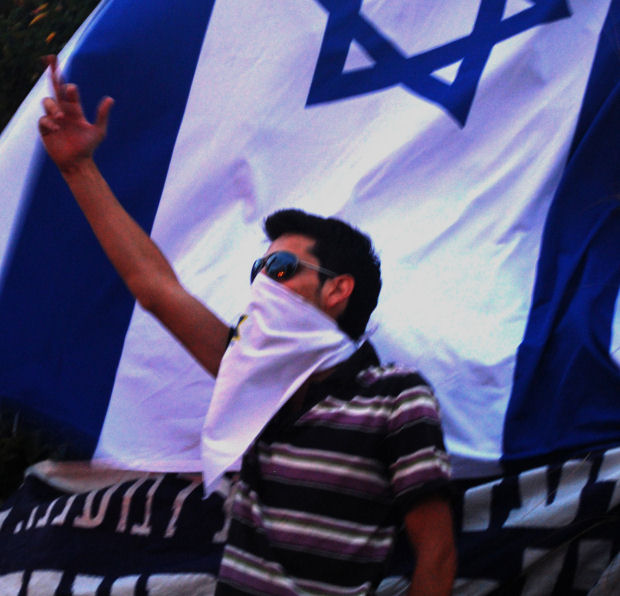 An Israeli demonstrating in front of the Turkish embassy. (Credit: Tom Eschar)

Apart from that, there are several strains of fascism. Italian fascism sanctified the State, but the German version – to which Israel is much closer – chose to sanctify the Volk, the people, and not the state; its goal was to have the Party, allegedly the representative of the Volk, inherit eventually the place taken by the state. As we all know, this process did not reach fruition. Italian fascism pushed the monarchy to the backstage; French and Spanish fascism contained strong royalist tendencies, and so do some of the Israeli Volkisch movements: Moshe Feiglin’s Jewish Block – Ha’Hativa Ha’Yehudit, a part of the Likud – calls for Israel to be ruled “by a President, or a King” (Hebrew).

The survey quoted by Yediot found that, although most Israelis reject the notion of a “strong leader”, a majority (53%) of the immigrants from the former Soviet Union do want one. This should not be surprising: most of us know that Hitler was officially called the Fuhrer, but few know that Stalin was often styled with a similar title, Vozhd. Unsurprisingly – the Russians always licked the boots of their tyrants, at least until they turned out to be weak – Russia is experiencing a wave of nostalgia towards Stalin, the only person who can claimed he killed more Russians than Hitler did. The Russians immigrants who came to our shores did not leave Russia behind; they imported it to Israel. Former president Bill Clinton said something very similar recently, which caused Israel Beitenu, Liberman’s party, to shriek in protest.

Another piece of data which confuses Yediot is what looks like a contradiction in terms: 80% of Israelis consider themselves to be democrats, and only 10% as ultra-nationalists (while 3% of the population identifies themselves as openly fascist). On the other hand, 36% (!) of polled Jews want to deny Israeli Palestinians voting rights, and 58% say that freedom of expression should be curtailed if it may “harm Israel’s non-security-related interests”. Given that security reasons are the main excuse for suspending freedom of speech around here, the number of Israelis who support such curtailment is likely to be much higher. It should further be noted that we have no way of knowing how many of the polled Israeli Jews supported Israeli Palestinian voting rights for reasons of Hasbara, i.e. would have been very happy to deny it, but refrain from it due to fears of international reaction; but given that earlier polls put that number at about 55% of young Israeli Jews, one assumes the percentage may be higher than the reported 36%. Then again, younger Israeli Jews are more militant.

So what’s going on? I think that we see is cognitive dissonance. A large segment of the Israeli Jewish public is Volkisch, which is to say supporting that brand of fascism which claims that his nation, membership in which is transferred by blood, is inherently superior to other nations; that a transfusion of “foreign blood” will weaken it or harm it in some other way (which causes an unnatural fear of “miscegenation”, particularly marriages between Jews and non-Jews); and is xenophobic, willing to believe in a blink that others hate him and want its destruction.

But, on the other hand, the average Israeli knows that fascism and ultra-nationalism are bad things. He was taught that during his Holocaust studies at high school: there is a link between the Holocaust and the rise of fascism. So he does not want to be associated with the term fascism. He therefore makes a valiant effort to remove from his consciousness the fact that if the amorphous term “fascism” still holds any meaning, he probably fits the bill. He terms himself a democrat, even though there is nothing remoter from him than the basic concept of democracy – that every resident is a partner in the republic – and he’s looking for roundabout ways to Volkism, and for words to hide its essence.

He’s not a fascist, he’s a Jew; and he takes cover behind the fact that “Jew” is about as amorphous as “fascist”. He can say “Jew”, and mean “someone who is born in the image of God, unlike gentiles”, while taking comfort from the fact that others – in Israel, very few others – will use the same word to mean “someone of a particular culture, which promotes skepticism and is hostile to discrimination”. This fogginess allows him to say comfortably hes not a fascist.

He isn’t. He’s a Volkist. But he doesn’t know that: he was told about fascism in school, and you can be certain he doesn’t hold the state in high regard. And Israeli law, after all, makes exception for racism, if it is on religious grounds; so no one will enlighten him.

And meanwhile, he “becomes stronger in his faith”.