No Israeli public figure I’m aware of has spoken out against yesterday morning’s attack on an arms convoy transferring weapons (reportedly not chemical ones) from Syria to Hezbollah, which, according to foreign news agencies, was carried out by the Israel Air Force. Everybody here is scared – look what’s happening in Syria, there’s chemical weapons up there, the country’s breaking up. “The entire area is raging and we must be prepared and strong and determined in the face of any possible development,” Netanyahu said this week, and everybody, as usual when the leader invokes national security, is dutifully quiet.

But the jet bombers, according to those foreign sources, didn’t hit chemical weapons. And the air strike wasn’t aimed at that butcher Assad, whom everybody’s afraid of.

No, yesterday morning’s attack was part of the old war Israel’s been fighting, the one against Hezbollah. In it, Israel’s right to self-defense includes possession of weapons that can destroy Lebanon, as well as the continual dispatch of spy planes over that country. But if Hezbollah tries to get anti-aircraft missiles against those spy planes, or long-range, powerful missiles against Israel’s cities, then what’s that? That’s not Hezbollah arming itself in self-defense, that’s Hezbollah threatening Israel’s existence, which gives Israel the right to attack it. In self-defense, of course.

Israel is particularly concerned about the Russian-made SA-17s because they could substantially restrict the IAF’s freedom of movement over Lebanon − an area where today, it can operate virtually unhindered. These IAF flights are crucial for gathering intelligence about Lebanon.

Imagine what Israel would do if any foreign entity tried to fly spy planes over its airspace. But we’re entitled to because we’re good, and they’re not because they’re bad.

The attack didn’t address the fear of Assad, either, the idea that a guy who’s willing to kill tens of thousands of his own citizens would be more than happy to launch his worst weapons at Israel. In fact, Israel has felt quite secure all along with Assad – both with Bashar and his murderous father Hafez – sitting on one of the world’s largest chemical weapons arsenals. The regime has kept the peace on the Syrian border for 40 years; the fact that it’s been led by monstrous dictators is not an issue for Israeli “realists” like Netanyahu; they prefer a stable dictatorship to an unstable Islamist insurgency. It’s only when high-class weaponry is moving out of Assad’s reliable hands into those of “irregulars” does Israel feel compelled to strike – as yesterday morning’s bombing apparently showed.

This is not self-defense, this is aggression – and it would have been aggression even if the target had been chemical weapons. It doesn’t matter how rotten Hezbollah’s ideology is, or the jihadists’, or Assad’s – Israel cannot build a military arsenal to the heavens, then bomb anybody who tries to acquire even a tiny fraction of it, and then go on telling the world it wants peace with its neighbors. It can’t keep attacking foreign countries and saying it did so because those countries are arming for aggression. And it can’t go on crying Holocaust when those countries, or those irregulars, answer Israel’s attacks with their own.

It seems we just picked another fight beyond our borders. And nobody in this country, nor among our friends abroad, is saying a word against it – because so far, we haven’t paid a price. But our power has made us arrogant, and our arrogance has made us blind and stupid, and we are riding for a fall. 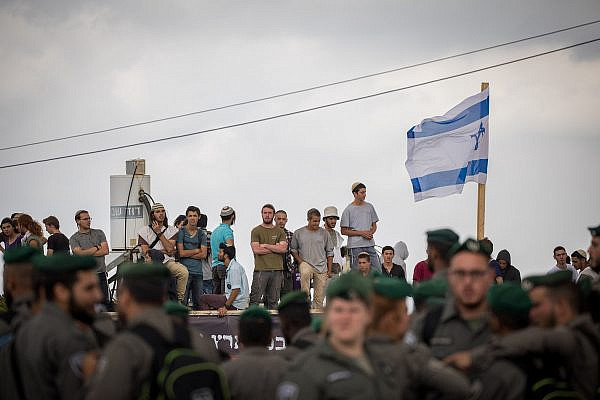