While thousands of J14 activists took to the streets and blocked main roads in major cities Sunday night, a group of reserve service soldiers is forming a new agenda of conscientious objection in protest of neo-liberalism and the lack of social justice. “I will no longer defend a state that doesn’t defend its citizens,” says activist.

Moshe Silman, who set himself on fire Saturday night and who is still struggling for his life, sparked a new wave of angry J14 protests against the Israeli government. Thousands of demonstrators marched the streets of Tel Aviv, Jerusalem, Haifa and Be’er Sheva Sunday night, enraged by anti-social policies and by Prime Minister Netanyahu’s response to the event, which he defined it a “personal tragedy.” Protesters carried copies of Silman’s suicide letter (parts of which were omitted in the pro-Netanyahu daily Israel Hayom), and chanted slogans such as “every man is Moshe Silman” and “Netanyahu – go home!”

In Tel Aviv more than a thousand demonstrators blockaded government buildings and blocked main roads, including the Ayalon Highway, and gained much support from car and even train drivers passing by. While in Tel Aviv police did not intervene, In Jerusalem six were arrested while blocking roads. Late at night the  entrance to the National Insurance Institute (Bituah Leumi) building in Ramat Gan was set on fire, and graffiti was sprayed reading: “Price tag for Moshe Silman.”

One of the protesters in Tel Aviv was Guy Tamar, a 39-year-old resident of Modi’in who works with children suffering from ADD, is married to a teacher and father to a young daughter. Earlier in the day Tamar posted a status update in his Facebook account declaring that he would refuse to return to military reserve service due to the government’s social-economic policies. “I was careful not to reach this point before, but on a day such as this there is no choice,” wrote Tamar. “I will no longer defend a state that does not defend its citizens.” Within hours five more reserve service men, two of them officers, sent him their names and ranks and asked to join the initiative, as did two ex-servicemen.

[UPDATE: On Monday afternoon, Tamar updated his status on Facebook to inform that his post on refusing was removed due to “a violation of Facebook regulations” and he was asked not to write it again. He will try spreading the word in other ways.]

“I had problems with the way the army does things in the past, but I felt like it was important to be there and make a difference,” says Tamar, who is a first sergeant (res.) in the engineering corps. “But recent events cracked something within me. You can say my eyes were once closed, and the social justice protests opened them in such a way that I can’t go back.” 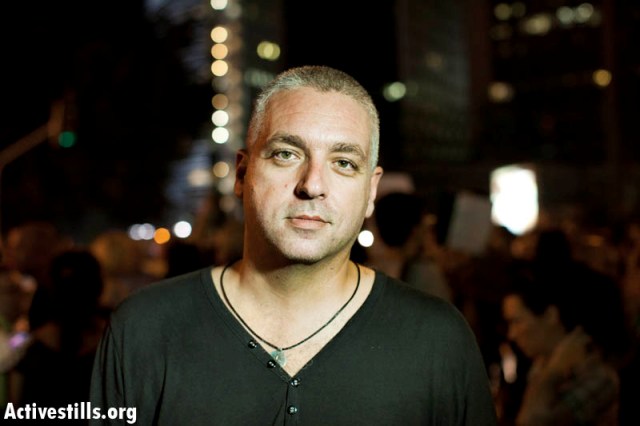 "My eyes have been opened." Guy Tamar (Oren Ziv / Activestills)

Last year Tamar was one of the founders of the protest encampment in his city, and was exposed to a reality he had never known before. “It came to the point where families came to me and asked for help in getting a box of basic food supplies – and this in Modi’in, a proper middle-class city. Since then I’ve been meeting single parents, seeing families on the brink of economic collapse, to the point of home evictions. This is how I got more and more involved, and the more you protest the more you learn.

“On Saturday night I was marching with Jerusalem activists when the news came. When you hear of someone capable of doing such a thing you can’t help realizing the depth of the pit a person has to fall into to do such a thing, to actually burn oneself, and you see how no one really cares. That’s when I decided I won’t serve a state that doesn’t protect its citizens. I love the people here, and I fight for them, not for some institution or for lands. If the state breaks its end of the social contract – I will break mine. This is something that’ll have more of an effect than these demonstrations.”

Tamar was preceded by Julian Feder, one of the founders of the very first encampment in Tel Aviv. Feder was sent to prison for 10 days for refusing service as a combat medic in February, declaring that he would not fight for a state that fights its own citizens with anti-democratic legislation and an anti-social budget. There are also local traditions of young people in the lower classes, who avoid military service in quiet protest against government policies. Many of them have spent long periods in prison. However, this is the first time that such an individual initiative gets immediate positive reactions, and has others joining in.

>Read more – Solidarity vs. militarism: The Zionist contract and the struggle to define J14

When asked about the conservative parts of J14, who have recently demonstrated in support of compulsory service for all citizens, Tamar is quick to respond. “As far as the protest is concerned they are nothing more than a lousy spin. We mustn’t worship the army, but rather the lives of citizens and all others who live here. Before equal duties we must talk of equal rights. The government must understand that we are rejecting the militaristic discourse.” 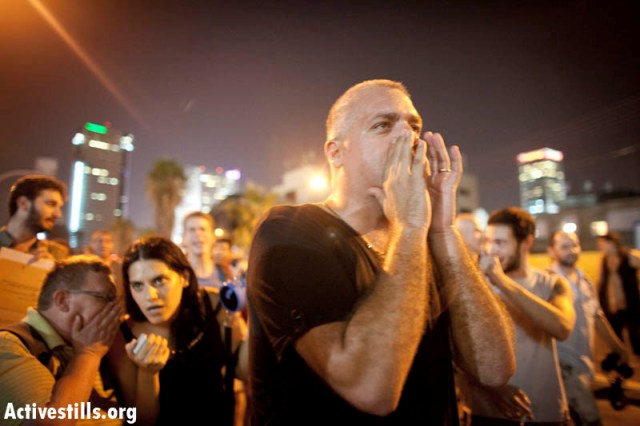 "The state broke its side of the social contract." Tamar demonstrating (Oren Ziv / Activestills)
Get Our Weekly Newsletter