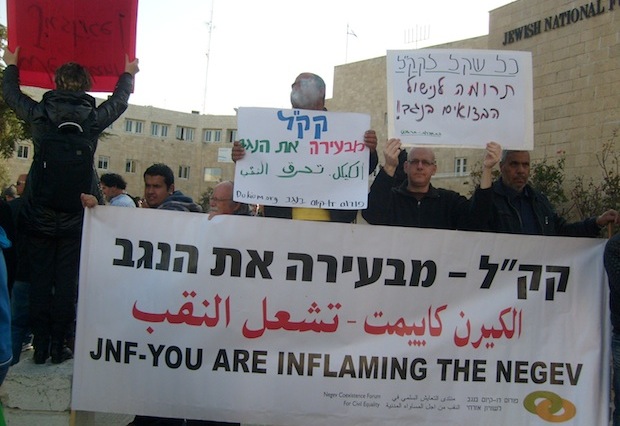 Some 100 demonstrators gathered at the Jewish National Fund headquarters in Jerusalem on Sunday to protest afforestation plans in the Negev region of Southern Israel, which could result in the displacement of Bedouin families residing there.

Rallying in front of the JNF’s sprawling offices in downtown Jerusalem, the crowd included activists from Rabbis for Human Rights and regional Bedouin leaders. Holding posters declaring their opposition to the forcible transfer of the Bedouin population, the protesters received thumbs-up from passersby and honks from speeding drivers.

One demonstrator, a resident of the al-Araqib village—located seven kilometers north of Beersheba (see here for a detailed map)—described how the Israeli authorities confiscated his cropland:

“The JNF took my land,” said a man who introduced himself as Hussein and who was born in al-Araqib. “They’ve taken everything, all types of crops—watermelon, wheat—and they planted trees all over it…  Now we’re all living in the al-Araqib cemetery, all 25 of us [extended family members].”

The Israeli authorities have been trying to evict the residents of al-Araqib since 1999,  who were then estimated to number some 500. In July 2010, the Israel Land Administration razed the al-Araqib village in order to plant a forest there. Most of village’s structures were subsequently rebuilt.

Since then, the authorities have demolished the village at least 32 times, according to Haia Noach, executive director of the Negev Coexistence Forum for Civil Equality.

Every few months, the cycle resumes, with the Israeli authorities demolishing and the villagers rebuilding.

Virtually none of the structures have proper building permits, according to village residents. The Israel Land Administration—the authority carrying out the demolitions— argues that the area was pronounced state property for “security purposes” in 1954.

Al-Araqib is by no means the only unrecognized village affected by JNF development.

According to a 2011 report by the Association for Civil Rights in Israel, approximately half the Bedouin population in the Negev—or 90,000 people—live in quasi-recognized or unrecognized villages similar to al-Araqib.

Many of their villages, all lacking basic infrastructure, face the same predicament as al-Araqib. In 2007, in order to supposedly find a solution to the unrecognized villages, Israel established the Goldberg Commission, which concluded that the Bedouin villages should be recognized and their buildings rights retroactively legalized.

However, the Prawer Commission, established to implement Goldberg’s recommendations, calls to transfer some 30,000 Bedouin from their Negev villages to existing Bedouin townships. Its conclusions were approved by the government last September.

As Noam Sheizaf of +972 reported in November of last year, the JNF now controls 13 percent of the land in Israel. As a policy, the fund – a non-profit which is run by the Israeli government – markets its land only to Jews.

Regarding the JNF’s plans for the Negev, Gadi Elgazi of Tarabut-Hithabrut, an Arab-Jewish movement for social and political change, said, “It’s the largest campaign of dispossession in Israel, against the weakest and poorest population in Israel by any socio-economic standard.”

It doesn’t help that among Jewish communities abroad, the JNF conjures images of blue donation boxes and a pioneering ethos. “From the [United States], many people contribute to the JNF believing that it does nice things for everyone. They don’t know what’s going on in the Negev, the daily demolitions,” Elgazi continued.

The al-Araqib village has scrambled to organize against the eviction efforts, creating a local committee. But the head of these efforts, Awad Abu Freih, a professor of chemistry and resident of al-Araqib, said the prospect of forestalling the JNF’s plans was weak.

“In the end, they will take our land,” Abu Freih said. “We haven’t had any successes but there have been some delays.”

In response to the protests, the Israeli government has offered compensation for the al-Araqib village. “The government wants us to move and they’re offering 1,000-2,000 shekels for one dunam,” or about $270-530 for a quarter of an acre, Abu Freih said.

A number of Israelis and international organizations have responded to the eviction efforts by petitioning and pressuring the JNF.

Rabbi Arik Ascherman, executive director of Rabbis for Human Rights, has lobbied the JNF on the behalf of al-Arakib and says that the organization is feeling the heat.

“There are people on the directorate both here and in the States that who would like to see this changed,” Ascherman said, without divulging individual board members’ names.

In December, JNF board member Seth Morrison resigned from the organization in response to news of similar evictions and demolitions in East Jerusalem.

“I think it reflects that many people who believe in the JNF and support and love many of things they do, as I do, and put their coins in those little boxes over the year or sent more significant checks; they expect something different of the JNF,” Ascherman said.

The JNF was not available for comment at time of publication. Stay tuned for updates.