Activists disrupt the operation of the Jerusalem Light Rail to protest the deal with the operating company, which effectively bans public gatherings in Zion Square in the heart of West Jerusalem. 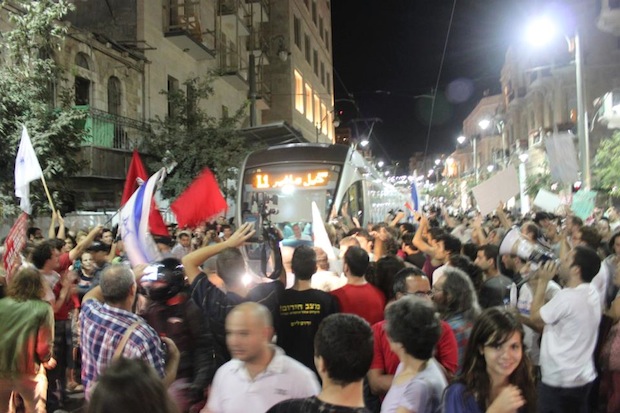 A few hundred Israelis attempted to reclaim their public space in Jerusalem on Saturday evening.

Over a month ago, as Israel’s social justice movement, widely known as “J14”, was gearing up to renew its regular demonstrations, a request was submitted to the Jerusalem police for a permit to hold a demonstration in Zion Square. This is the main square in the heart of West Jerusalem’s city center, and over the years has seen thousands of demonstrations, from Israel’s Black Panthers and right-wing gatherings against the Oslo Accords, to student strikes and vigils just 10 people strong commemorating Palestinians killed by the IDF.

The reply from the police was unequivocal: there is an agreement with CityPass (the consortium that operates the Jerusalem Light Rail Transit) that no protests can be allowed near the path of the light rail, nor on the roads that “feed it”. This effectively means that protests can no longer be held in most of  West Jerusalem’s city center.  The French company Veolia has a 5 percent share (through its subsidiary Connex Israel) in CityPass and also owns some 80 percent of Connex Jerusalem, the company which operates the trains. This privatization of public space – the main public space in West Jerusalem – went under the radar, unheard of, unnoticed, un-debated.

Last Sunday, and every day since, in the run up to a large demonstration yesterday, the people of Jerusalem (mostly West Jerusalem) gathered to reclaim their streets – our streets.

We demanded social justice, and asked what that means. We demanded public housing, public space, and yes, we also demanded an end to occupation, because you can’t have social justice without justice for all.

But we also demanded an end to privatization – and this might be the most important thing. We demanded our government stop selling our public space to corporations whose only interest is money. We demanded that these companies not be allowed to profit at the expense of our freedom of protest, and freedom in general. And this is why we had to demand an end to occupation in the same breath: these companies profit not only on the expense of our freedom, but also, and probably even more so, at the expense of the Palestinians’ freedom.

The train that did not stop yesterday, in order to prevent protesters from boarding, was deliberately planned to have as few stops as possible in Palestinian neighborhoods – even though half of its route goes through East Jerusalem. Veolia, the company that won a contract to control the main square of West Jerusalem, also received a contract to dump waste on Palestinian lands in the Jordan Valley. The trains that protesters were pulled off by police yesterday are owned by the same company that supplies buses that go through the West Bank, but are for Israelis only. The light rail that occupies the public space in West Jerusalem was also built to strengthen the Israeli occupation of East Jerusalem, and to improve the connection between the settlements in northeast Jerusalem to the center of the city. And Veolia, like many other companies, has made lots of money from both these occupations.

We will continue to go out every evening to try and demonstrate this link to the Israeli public, declaring that the interests of Veolia are not our interests, and Jerusalem – all of it – belongs to its residents, and not to corporate greed. 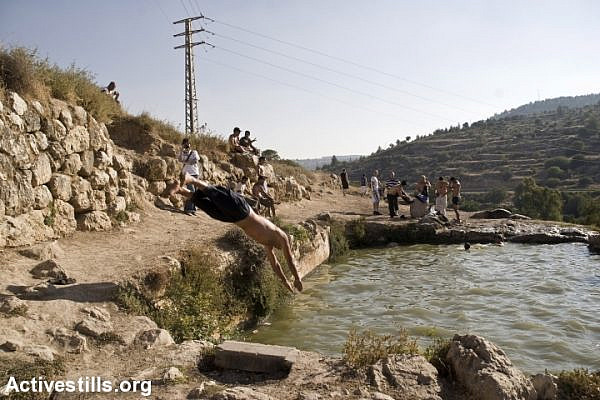