Jewish food has always been a way to demonstrate how Jewish immigrants and refugees mixed and integrated into different societies. So how did it all of a sudden become ‘Israeli?’ 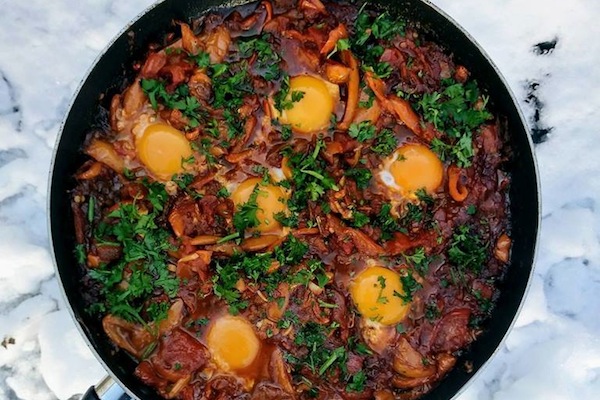 Tablet Magazine released last week a list of “the most Jewish foods,” in which editors Gabriella Gershenson and Alana Newhouse invite “us,” the Jewish readers, to contemplate the question of which foods contain “the deepest Jewish significance — the ones that, through the history of our people… have been most profoundly inspired by… the contingencies of the Jewish experience.”

This moment calls our attention to the enduring issues of erasure and cultural appropriation that form the ongoing failure to recognize — let alone embrace or even explore — the complexities around the term “Jewish food,” especially when dealing with “the contingencies of the Jewish experience” of Arab culinary geographies — what the editors call “host countries,” invoking an old Zionist trope. The story is further complicated when we deal with cultural traditions that originate in illegitimate and “weak” countries (at least from the perspective of the American Jewish liberal imagination) such as Tunisia, Morocco, or Lebanon.

It is not surprising then that the efforts made by some Tablet contributors to theorize certain Arab food items fall in line with the current policy of the Israeli Ministry of Foreign Affairs. In the paragraph devoted to “Hummus,” for example, Liel Leibovitz implies that everything eaten in the Jewish State is, well, “Jewish,” (as these food items bare, in his words, “the tanginess of the Jewish state”). Hummus, he writes, “is a cultural ambassador, an Israeli emissary here to insist that you love it no matter what.” Would anyone dare suggest that sushi or pasta, both very popular in Israel, are “Jewish?” No, because they originate in legitimate, “strong” culinary contexts.

The paragraph on “shakshuka,” also by Leibovitz, is perhaps the most embarrassing. “So what if the Moroccans make it, too. Never mind that Tunisians eat it for breakfast each weekend, or that it delights the Greeks and satiates the Algerians: Shakshuka is Israeli now,” he declares. The irony? Shakshuka is actually Jewish-Tunisian. There is no need to transform “Shakshuka” into a Jewish food through its connection to Israel — it has always been Jewish. It is no wonder that my Muslim Tunisian friends in Tunis often ask me whether Israelis really think they can rebrand shakshuka?

Our Arab countries do not actually exist in this liberal Jewish narrative. They only exist as an exotic dream of the past, with its warm spices and spicy food, one giant amalgamated space somewhere between Iran and Morocco.

And where would this mishmash (aka “shakshuka”) be without the ultimate Jewish spice — persecution. “As Jews huddled for safety in their biblical homeland,” Leibovitz simmers, “fleeing violence in Rabat or Tunis or Algiers, they could take comfort in one thing: simmering onions, peppers, and tomatoes, topped with a couple of eggs, cooked on a skillet and consumed with a fresh loaf of white bread.”

The dichotomy between “Jews” on the one hand, and “Arabs” on the other, which is promoted by the likes of Leibovitz, Prime Minister Netanyahu, and American Jewish Republicans, puts Tunisian Jews such as myself in a strange position. My aunt, who lives in Tunis, continues to cook the same “winter shakshuka” (the kind Leibovitz has yet to taste) she has known since childhood. By breaking down this dichotomy, which portrays Arab countries as dangerous for Jews, we can begin to cast doubt on everything we have been taught about these two seemingly separate categories.

Food is only one powerful way to show the effects of immigration. Think, for instance, about the Mexican tomatoes that made their way to Italy and Tunisia were combined with olive oil to create new tastes. Jewish food is especially useful to show how our people moved and mixed into the region. In fact, that’s how most Jewish food was created. The pumpkin tortellini and amaretto from Mantova, the saffron used in Roman-Jewish fritto misto mix, and of course, London’s famous fish and chips. It takes a whole lot of chutzpah to claim otherwise.

Rafram Chaddad is a visual artist and food researcher who lives in Tunis by the sea.