The Israeli government succumbs to pressure by racist and anti-miscegenation organizations, banning Jewish women from volunteering in hospitals at night, when they might be more likely to encounter Arab workers and doctors.

Young Israeli women volunteering at hospitals in Israel as part of their national service (an alternative to serving in the Israel Defense Forces) will no longer be allowed to do night shifts in order to avoid any contact with Arabs, Channel 10 reported Wednesday (Hebrew).

The director of Israel’s National Service Administration, Sar-Shalom Jerbi, issued a directive two weeks ago banning any volunteer shifts past 9:00 p.m.: “We reached the decision based on concern for our volunteers, and Minister [Naftali] Bennett gave his blessing.”

According to the report, the decision was made following a pressure campaign waged by religious Zionist rabbis, among them notorious Kiryat Arba Rabbi Dov Lior (arrested in 2011 for incitement against Arabs and for legitimizing the killing of non-Jews in war time) and the radical Israeli anti-miscegenation organization Lehava. They began the campaign over the last year after hearing reports of “intimate relations” between some of the Palestinian-Arab doctors and the Israeli Jewish volunteers.

The decision was not sharp enough for Lehava, however, according to a statement issued by its director: “Unfortunately, this is too narrow and too late a step. National service should be terminated anywhere there are goyim [non-Jews].”

Just last month, I reported on another anti-miscegenation religious organization Yad La’achim, who is collecting IDs of Jewish Israeli girls who are found socializing with Arabs.

Related:
IDF soldier passes IDs of Jewish girls who socialize with Arabs to anti-assimilation NGO
Poster calls on Arab men to stay out of Jerusalem, away from Jewish girls 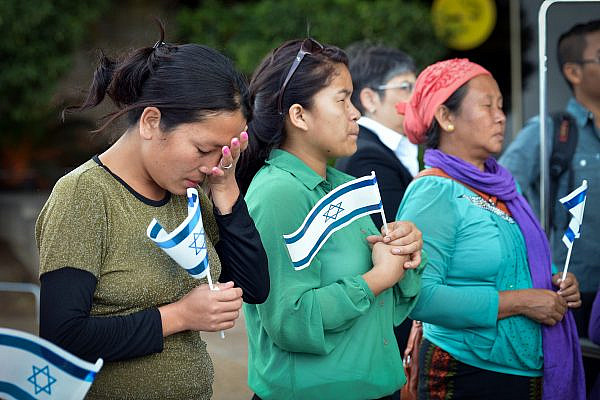