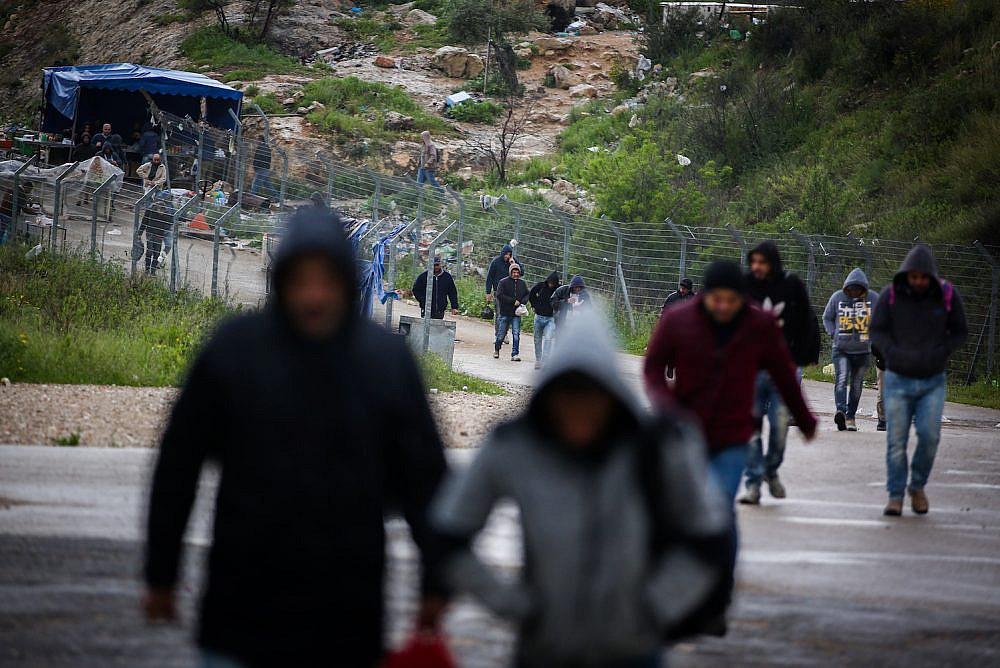 Illustrative photo of Palestinian workers from the West Bank crossing a checkpoint into Israel. (Flash90)

A Tel Aviv labor court ruled on Tuesday that the Jewish National Fund had discriminated against and wrongfully dismissed a group of Palestinian employees in July 2020. The court ordered that the Palestinian workers be compensated and rehired immediately.

The plaintiffs had worked for five to 10 consecutive years at the JNF, a quasi-governmental organization that acquires land in Israel-Palestine in the name of the Jewish people, often at the expense of Palestinians. They were employed as field workers in the organization’s Central Division Implementation Unit, which focuses on construction in JNF forests. Despite the fact that the plaintiffs had worked side by side with Israeli employees for years, they hadn’t received status as permanent workers because they live in the occupied territories.

While JNF employees are unionized under the Histadrut, Israel’s labor federation, the names of the 10 Palestinian workers were not included in a series of collective bargaining agreements reached by the workers and the JNF regarding employment, tenure, and dismissal. As part of a special collective bargaining agreement JNF employees reached with the organization in May 2020, it was decided that 35 temporary workers from a list of 74 workers attached to the agreement would be fired, subject to a hearing. Every Palestinian worker from the West Bank ended up on the list of those who were to lose their jobs.

The dismissals took effect on July 31, 2020. JNF subsequently reversed the decision to lay off some of the workers, after agreeing to include workers who had retired for other reasons in the list. Yet the decision regarding the dismissal of all Palestinian plaintiffs remained unchanged. None of the temporary Israeli laborers who worked alongside the Palestinians were fired, despite the fact that a number of the Palestinian workers had seniority over some of the Israelis.

According to the prosecution, JNF’s discrimination lay in the fact that the Palestinian workers were never given permanent positions and remained temporary employees for years, contrary to the provisions of the collective bargaining agreements.

The JNF does not deny that the Palestinian workers were refused permanent employment in direct contravention of the provisions of the collective bargaining agreements. In fact, it argues that “there is a substantial difference between the plaintiffs and other employees,” and views the Palestinians as “structurally temporary” workers who cannot be granted full labor rights.

According to Israel’s Employment (Equal Opportunities) Law, an employer cannot discriminate against job applicants or employees on the basis of their nationality. But the JNF found a creative way to interpret the law: it claimed that the term “nationality” does not refer to the distinction between Israeli and Palestinian workers, but to nationality on the basis of ethnicity rather than citizenship.

The court remained unconvinced. “The interpretation [of the law] is puzzling, illogical and incompatible with the language of the law and case law,” it ruled. “This is an interpretation that binds all Arab citizens of Israel to a uniform and one-dimensional political/national identity that is in itself paternalistic and racist. It is a shame it was raised and must be annulled.”

The Palestinian workers also sued the Histadrut labor federation, which they claim turned a blind eye to JNF’s discriminatory practices for years. In its response to the lawsuit, the Histadrut argued that “according to the defendant, the plaintiffs were defined as temporary workers given the inability to grant them permanent status due to their being residents of the Palestinian Authority and due to the inherently temporary nature of their employment.”

The Histadrut further argued that during the work period, the plaintiffs did not request the Histadrut to change their status to that of permanent workers, and did not raise any claims regarding their current employment. “The collective bargaining agreement from 2020 was signed on the backdrop of the coronavirus crisis, in light of the need to save on labor and wages,” the labor federation claimed in a defense of the employer rather than the workers.