The September Journey and Christmas Journey were only the beginning. Here’s what’s coming next. And as +972 is a volunteer project, I am appealing to you, our readers, to help make it happen – here’s how. 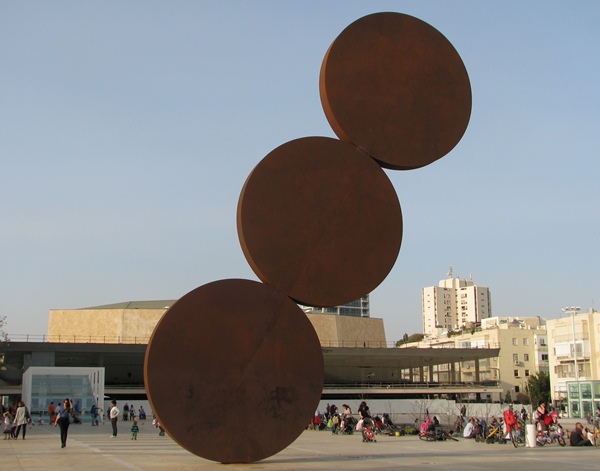 "Ascension," a statue by Israeli artist Menashe Kadishman, on Tel-Aviv's Habima Square. Photo by the author

Harmony has three parts. The king in folktales always fathers three daughters (as did Shakespeare’s King Lear). Sonatas and concertos are typically made up of three movements, and great painted triptychs leave an impression on the viewer that lasts a lifetime. Think of Hironimous Bosch’s “Garden of Earthly Delights”.

When painting the complex garden of earthly doubts known as Palestine, or Israel, or Canaan, or the Holy Land, a three-part composition may prove helpful. Two sections of my attempt at this feat as a travel writer are now complete. These are the September Journey, comprised of 24 posts, and the Christmas Journey, made up of 12 posts.

Now comes the time for the third movement, the third panel in the tryptich, which should complete it and allow us to turn the journeys into +972’s first e-book. Please take two minutes and view this explanatory video, in which I describe the concept for the project’s finale, outline the course I am planning to take and explain its significance, with the help of Moo the cat (who isn’t really such fine help).

So that’s the idea, a three-week journey along the contour of the entire country, as it was defined in 1948, from my home in Tel Aviv back to my home in Tel Aviv, via every border Israel has, or thinks it has, or denies it has. I’ll offer peeks into neighboring countries, as well as cross the lines at times and travel along the outside, looking in (that should be easy to do in the Golan and West Bank). I’m also planning to pop over into one neighboring country that hardly anyone’s heard of: the tiny nation state of Achziv. Population: 2.

The rule of three calls for elegant variety. If the September Journey was defined by a time frame and the Christmas Journey by a theme, the Round Trip one will be defined by geography. It will kick off on April 7 and is set to end April 28. I will post stories and photos as it unfolds. You may expect to see a few guest appearances from familiar faces from previous trips, as well as many new faces. The outline of this country is inhabited by an amazing variety of societies, living a myriad of lifestyles in a myriad of landscapes, and experiencing the frontier in countless ways.

I will need your help. +972 Magazine is a non-profit. The bloggers write voluntarily; we do not receive pay for our time or efforts. But expenses – such as food, transportation and occasional lodging – must be covered. While undertaking previous trips, I ran twice into crisis. The September Journey nearly ended when Israel began fueding in earnest with Turkey – I had been counting on pay from travel articles about Turkey to help with expenses. Those were never published and pay never arrived. In another incident, a lawyer helped me sort things out after I was arrested en route. I payed him with a song, literally.

In the midst of The Christmas Journey, the guitar came handy again. I got stuck in the northern hamlet of Harashim, and had to appeal for donations by singing about Santa going bankrupt. I later learned that donations were indeed coming in. My kind readers didn’t leave me alone on the road, but the fear of having to quit the project halfway was not pleasant.

Of course, following the rule of three, the entire project will be incomplete without a third crisis, but it needn’t be financial. I trust our crazy incoherent borders, made up of green lines and blue lines and red lines, of walls and fences, of divided villages and seemingly irreconcilable cultural barriers, to fix me up with one.

With your help, the triptych will indeed be completed. Please click on the donate button at the bottom of this page, or at the top right corner. Please specify that you are donating to “The Round Trip,” or Yuval’s journey. My intent and that of the entire team at +972 is to show this country, at this time in history, from as open and humanist a perspective as possible, to defy propaganda biases and to creating new understandings.